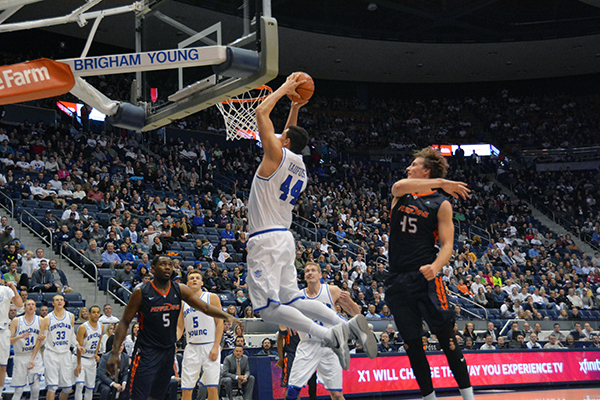 BYU sophomore Corbin Kaufusi dunks the ball during a game at the Marriott Center. Kaufusi will play his first season with the BYU football team in 2016. (Photo by Rebecca Lane/UV360)

It feels refreshing to Corbin Kaufusi to finally not worry about getting in foul trouble.

Those five fouls are in the back of Kaufusi’s mind when he defends the basket as a BYU basketball player. He has to be wary of getting too physical with an opponent or he can find himself forced to the bench within just a few minutes. On the football field, it’s a different story.

Kaufusi can burst off the edge, hit someone and tackle them to his heart’s content. Being physical isn’t only required, it’s celebrated.

“In basketball, you have to dominate but you have to have that finesse with it,” Kaufusi said. “You can’t foul out here, so I love it.”

“In basketball, you have to dominate but you have to have that finesse with it. You can’t foul out here, so I love it.”            —Corbin Kaufusi, BYU basketball and football player

Kaufusi will get a chance to fully unleash his physical side this fall. The 6-foot-10 sophomore is splitting time between football and basketball after spending two years as a full-time basketball player.

When he first signed with BYU, Kaufusi did so as a football player. A growth spurt during his LDS mission initially changed Kaufusi’s plans. His taller frame seemed more suited to playing basketball than football. So he set his football plans aside and joined the Cougars on the basketball court.

Over the past two seasons, Kaufusi has played in 70 games and started in 36. He has averaged 4.6 points and 4.2 rebounds in 16.3 minutes per game during that stretch.

“I want to play football here,” Kaufusi said. “That’s the reason I came to BYU at first and, so when an opportunity presented itself, it was something I wanted to do.”

Making the transition back to football from basketball has required Kaufusi to make adjustments in several areas. 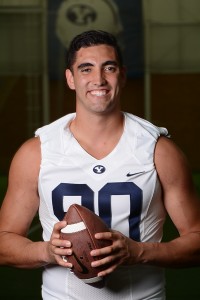 Kaufusi’s frame has the right amount of bulk for basketball, but he is on the skinny side as a defensive lineman. This meant changing his nutrition and off-season conditioning, so he could put on some extra muscle mass. Kaufusi has made some progress in that area, putting on 30 pounds in preparation for the season.

Other adjustments have involved learning defensive schemes and shaking off the rust after not playing football for five years. Timing favors him in that sense, since the rest of his defensive teammates are also learning a new defense.

Kaufusi feels like he is getting the hang of things pretty quickly in fall camp and is hopeful it will translate into playing time.

“There’s a lot of things that are coming back pretty quick and then there’s some things that are taking a little bit of time,” Kaufusi said. “This is every day progression. I’m not sure how it goes. It’s up to the coaches. But as long as I’m doing my part, it will be good.”

Kaufusi’s potential intrigues the BYU coaching staff. With his size, speed and vision, they anticipate him becoming a disruptive force in the same vein as his older brother Bronson.

If that happens, plenty of offensive coordinators will get headaches trying to figure out how to neutralize him.

“He’s hard to throw over,” BYU head coach Kalani Sitake said. “The quarterbacks are finding out about it right now. He can be a dangerous pass rusher and he can also use his leverage to help us out on the field. He’s just so big and he’s really agile for how tall he is.”

Kaufusi has already made strides to position himself as a better pass rusher and playmaker on the edge. His reaction to blocks along the line of scrimmage has come a long way since the start of fall camp.

What stands out the most for defensive coaches is Kaufusi’s enthusiasm and aggressiveness. He carries himself like a player who wants to get in on the action on every play.

“If you watched a lot of the basketball games, he was kind of holding back some of the physicality and aggression that was in him. You’re starting to see it now. There is never a time where we have to get him to go a little more. He’s playing physical ball.” —Ilaisa Tuiaki, BYU defensive coordinator

“For him, if you watched a lot of the basketball games, he was kind of holding back some of the physicality and aggression that was in him,” BYU defensive coordinator Ilaisa Tuiaki said. “You’re starting to see it now. There is never a time where we have to get him to go a little more. He’s playing physical ball.”

Kaufusi is trying to model his game after what Bronson did at BYU. His brother totaled 26.5 sacks, 167 tackles and 44 tackles for loss during his four years in Provo before getting drafted the third round of the 2016 NFL Draft by the Baltimore Ravens.

Bronson also played a season of basketball for the Cougars and he has turned into a valuable football resource for his younger brother.

“He’s like my personal coach at home,” Kaufusi said. “We watch film together even though he’s out in Baltimore. He loves it.”