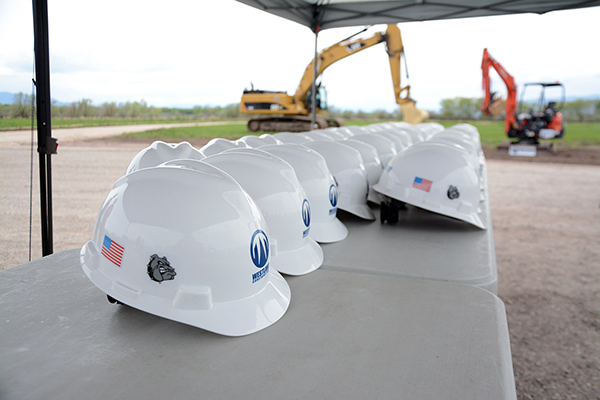 Construction at Provo High is underway, and the superintendent says the new high school will be completed in two years. (Photo by Rebecca Lane/UV360)

Construction crews are moving dirt around and pouring footings and foundations, making sure the new Provo High construction project is completed on schedule.

“They know they have two years to get this done and they are moving,” said Provo district superintendent Keith Rittel, during a joint meeting with the Provo council on Thursday.

Rittel, who’d been at the construction site in west Provo on Thursday morning, said crews are making sure the school building is as secure as possible from natural disasters. They created 500 subterranean piers, sunk them down into the bedrock, poured in gravel and concrete and then compacted them.

“I joked with them, ‘So when the flood comes the school will remain,'” he said. … “There’s a lot of confidence that the school’s not going anywhere due to seismic or flooding issues, which was one of the fundamental concerns about the site.”

“They know they have two years to get this done and they are moving.” —Keith Rittel, Provo district superintendent

In addition to the piers, crews are finished with all the plumbing and electrical footings and have poured several concrete foundations for different areas of the project, he said.

“The project is moving along quickly,” Rittel said. 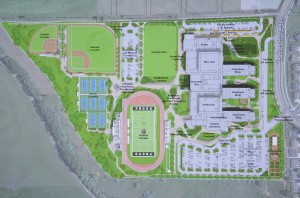 The building plan for the new Provo High shows three wings for students and two gyms. (Click on image to enlarge.)

The Provo School District broke ground on the site in late April, shortly after announcing it had sold the current Provo High property on University Avenue — 25 acres — to Brigham Young University for $25 million. The deal allowed the district to keep classes going at the school for 30 months, giving it time to build the new school at 1300 N. Lakeshore Drive.

Last fall, the school district announced that it had been approached about selling Provo High, which it had planned to rebuild at the existing site on University Avenue using money from a bond passed in 2014. It studied the issue, then announced that the school was for sale, and that it had decided to build a new school in west Provo. At the time, the district had hired an architect for the rebuild and had budgeted $55.5 million from the bond for the reconstruction. The bond money and most of the $25 million from the school sale will go to the new Provo High School, Provo School Board president Julie Rash said in April.

Utah-Tube: Elizabeth Smart explains how pornography played a role in her abduction Next post