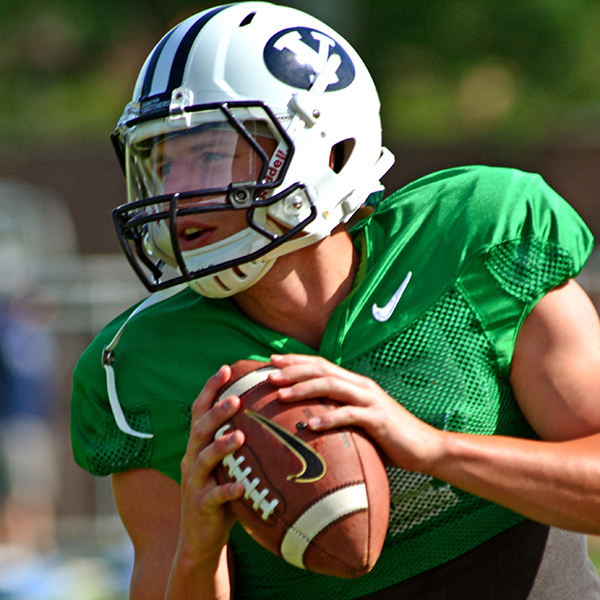 Taysom Hill returns as the starting quarterback for his senior year with the Cougars after three season-ending injuries. (Photo by Matt Bennett/UV360)

Finishing what he started at BYU matters to Taysom Hill.

It drove him through those months where he couldn’t put weight on his leg after suffering a season-ending foot injury against Nebraska. It lifted him up during a lengthy rehabilitation process where he had limited reps in the spring as he recovered strength in his foot and leg muscles. Hill could not feel satisfied until he put on a BYU football uniform again and, one last time, took the field as a starting quarterback for the Cougars.

He never envisioned being embroiled in a competition to be the No. 1 quarterback in his senior season. Hill embraced it — and like every battle he’s waged during his college football career — he came out on top in the end.

BYU head coach Kalani Sitake officially named Hill as the starting quarterback on Tuesday for the team’s opener against Arizona on Sept. 3.

“This obviously wasn’t ideal, being here for four years and then coming back and being in a quarterback battle,” Hill said. “It felt like I got a lot better because of it and I thought the situation was handled really well. It’s nice to be able to look forward and start to prepare for Arizona.”

“This obviously wasn’t ideal, being here for four years and then coming back and being in a quarterback battle. It felt like I got a lot better because of it and I thought the situation was handled really well. It’s nice to be able to look forward and start to prepare for Arizona.” —Taysom Hill, BYU quarterback

For Hill, things have come full circle and are different at the same time. He is a starting quarterback again, but he is stepping into this role within the framework of a new offensive scheme.

BYU offensive coordinator Ty Detmer has worked closely with the senior to change things up to help him acclimate to a more traditional pro-style passing offense. The footwork is different than what he grew used to in the “go fast, go hard” no-huddle offense he used to run. It has influenced how he goes through his reads and progressions on each play.

Hill has embraced the change. This is the type of offense he always imagined running, going back to his childhood days throwing the ball around in the backyard.

“This is what I grew up thinking I was going to be playing as a quarterback,” Hill said. “It’s a very fun offense to be in. We’ve added some nuances to the offense that fit my skill set and will make us harder to defend.”

Leadership and experience helped Hill eventually overtake Mangum. Hill is a fifth-year senior with a proven track record of success when he has been healthy.

Keeping Hill healthy is always a question mark now that he has suffered three season-ending injuries over the previous four seasons. The coaching staff is taking a cautious approach in game planning. They don’t want to completely restrain Hill from running, but they also want to make sure it isn’t his first option to move the chains.

“As a coordinator, you want to play to people’s strengths,” Detmer said. “We’ll have a plan going in on that part of it. He’ll know when the right time is and when he’s got to play it a little more closer to the vest.”

If the injury bug bites again, Mangum will be ready to step in just as he did a year ago. BYU has no plans to redshirt the sophomore. Sitake said he will play this season and be involved in the offense as the backup quarterback.

The first-year BYU head coach acknowledged deciding on a starter was tough because Mangum pushed Hill so hard throughout fall camp.

“Tanner is way better than he was a year ago just from that experience of being on the field,” Sitake said. “There’s some things that Tanner brings to the table that Taysom can’t and there’s some things Taysom does that Tanner can’t. We just feel like, for the team and where we sit right now, this is the right move for us.”

Hill is hopeful no one needs to step in and finish out another season for him this time around. He has exhausted every option to get healthy and stay healthy. His intention is to write a strong final chapter to his BYU football career.

Fear of enduring another injury has not held him back. Hill feels ready to go and prove he can lead the Cougars to success in 2016.

“I’ve been through this three times,” Hill said. “For me, from a mental standpoint, all I needed to hear was my doctor telling me I’m healed, I’m healthy and I’m good to go.”