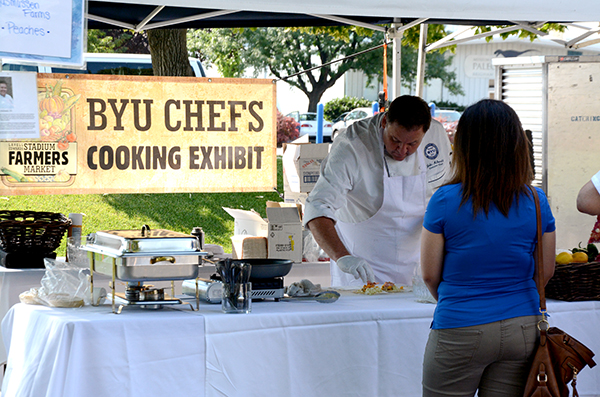 The LaVell Edwards Stadium Farmers Market is open for its sixth year supporting local growers — but this year BYU Dining is answering the many requests by adding Food Fest.

“For years we’ve had people asking for more food, but we resisted that because we emphasis that we are here for the growers,” said Aaron Black, general manager of BYU concessions.

Food Fest is on the west side of the farmers market, located in the parking lot at LaVell Edwards Stadium. Some of the vendors include Pyromaniacs Pizza, O’Crowley Irish Tacos, Yodeling Moose Kettle Corn, Pacific Island Grill, Tamales Tita, Passion Latin Cuisine and more. However, not all the vendors will be at every Thursday farmers market.

“For years we’ve had people asking for more food, but we resisted that because we emphasis that we are here for the growers.” —Aaron Black, general manager of BYU concessions

“There is quite a bit of interest in food vendors,” Black said. “Our market goers will determine how many (vendors) we have. The market gets a lot busier in September and October than August when the students come back for school.”

BYU’s farmers market doesn’t have consistent attendance numbers from week to week — except for the regulars who buy their produce in the first hour of the market opening — but it ebbs and flows according to what is happening around BYU’s campus. When there is a football game, the attendance increases. When the students and staff return to school, it increases, which is why Black says there is anywhere from 2,000 to 10,000 market goers on any given Thursday. 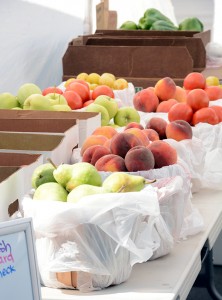 Of the vendors at the LaVell Edwards Stadium Farmers Market, 50 percent of them are local growers. (Photo by Rebecca Lane)

“We are pretty careful to take care of our vendors,” Black said. “We try to keep it balanced with the number of people attending.”

Part of that balance includes taking care of its BYU family. Black says each year the farmers market typically has a BYU student or staff member whose family owns a farm. For example, BYU had a student bring potatoes from his family’s potato farm in Idaho to sell at the market. This year, one student is bringing maple syrup from his family’s New England farm.

Outside of focusing on local produce sellers at the market and the addition of Food Fest, the LaVell Edwards Stadium also includes live entertainment. Local musicians, from guitarist and violinists to singers and bands, are scheduled for half hour sets from 4 p.m. to 7 p.m. There is also face painting for the family.

Black hopes the addition of Food Fest at the farmers market will be a relaxing activity for families, students and whoever wants to come to enjoy local food.

“We really want to let it grow naturally and be whatever people want it to be,” Black said.

Top 10 spots to explore in Yellowstone National Park Next post