Home Sports BYU BYU-Utah rivalry in matrimony: Where does the blood bleed true?

BYU-Utah rivalry in matrimony: Where does the blood bleed true? 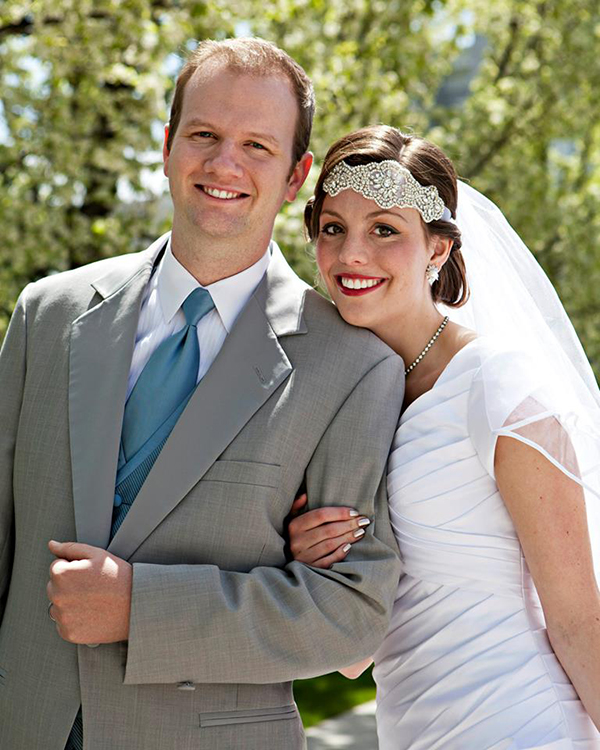 BYU fan Jeff Spear remembers watching the BYU-Utah football game in 2012 when he started receiving rivalry-smack text messages from a stranger, or at least from a number he didn’t recognize. It took him a while to figure out who the perpetrator was.

By the time he did, all he could do was laugh.

Cambri McDonald, who happens to belong to a family of die-hard Ute fans, was behind the text messages. And because of those texts, Jeff didn’t really mind the fact that his beloved Cougars dropped the third straight game to the Utes that night.

“I was getting attention from a cute girl,” he says. “I wasn’t too upset about the loss — at least that year.”

Cambri and Jeff grew up in the same Cedar Hills ward. During their youth, they were somewhat aware of each other and their parents have been longtime friends. But because Jeff is almost five years older than Cambri, they never ran in the same circles.

Weeks prior to the 2012 BYU-Utah game, Jeff and Cambri had become Facebook friends and Jeff had given her his phone number. 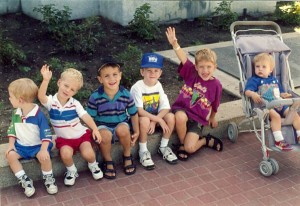 “I had no intention of calling him or hanging out with him at all. But I put it in my phone,” Cambri says. “I was with my parents at the game and I was really bored. I was trying to entertain myself. I thought, ‘I have Jeff Spear’s number and he’s the biggest BYU fan I know.’ He doesn’t have my number. I knew if I texted him, he wouldn’t know who it was. So I trash-texted him before the game.”

After that night, they continued to trade texts, then they talked on the phone and started dating. The next summer, they got married.

Sometimes romances start in the strangest ways. No, this isn’t your typical love story.

Their marriage has required some adjustments, just as all marriages do. But Jeff and Cambri Spear are proving that while the rivalry is a strong force, love is even stronger.

That’s a good lesson to remind ourselves of, now that BYU and Utah are about to play each other in a regularly scheduled game — for the first time since 2013 — on Sept. 10 at Rice-Eccles Stadium. The Utes have won five consecutive games against the Cougars.

Jeff and Cambri Spear’s relationship began because of the BYU-Utah rivalry. But it didn’t really affect them until after they were married.

It’s like they say: when you marry a person, you marry their entire family. Jeff married into a Utah family and Cambri married into a BYU family. They’ve accepted it. And they’re planning around it.

For example, when the couple has children, they won’t let the rivalry interfere in the way their offspring form allegiances within the rivalry.

“Cambri and I won’t do anything as far as influencing our future kids,” Jeff says. “So we’re going to let the grandparents take over that job.” 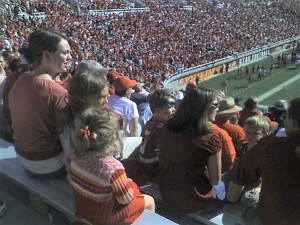 Cambri Spear’s grandparents bought season tickets to the football games at the U, which she would attend with her family. (Photo courtesy Cambri Spear)

Not that this is the first time Jeff has had to deal with Utah fans in such an up-close-and-personal way. One of his mission companions, when he served in Canada, was Griff Robles. At the time, Robles was on scholarship as a quarterback at Utah.

“He was a really good companion and a really good friend that I absolutely disagreed on football with,” Jeff says. “We were able to have good conversations. I conceded on his good points and he conceded on my good points. I have a lot of aunts and uncles and grandparents that are Ute fans. I’m not insecure about debating with them. Now that I’m married, I try to be more objective. I’m more diplomatic about how I approach the conversation. I concede in some areas of conversation. Most of the rivalry talk is between me and her dad and her grandpa.”

When Jeff and Cambri met, he was a BYU student and she was attending Utah State. After they got married, Jeff left Provo to go to school in Logan while his wife finished her degree. In August, Jeff enrolled at Utah for graduate school.

“Cambri’s family has fun with me,” Jeff says. “They try to buy me Ute swag now that I’m going to school there.”

And Cambri is proud of how Jeff’s grad school experience is working in her favor.

“I got Jeff to go to USU, which was like middle ground,” Cambri says with a smile. “Now I’ve got him to going to the U for grad school. I’m slowly pulling him away to the dark side.”

“Now I’ve got him to going to the U for grad school. I’m slowly pulling him away to the dark side.” —Cambri Spear, Ute fan

These days, they’ve both changed their views somewhat on the rival school.

“BYU games were always boring to me. I didn’t care,” Cambri said. “I’ll watch BYU now, which I never used to do.”

And that is Jeff’s victory.

“Yeah, she’ll watch BYU games with me,” Jeff says. “She’ll cheer for BYU too, if they’re not playing Utah or Utah State.”

Jeff concedes that he watches Utah games more than he ever did before. 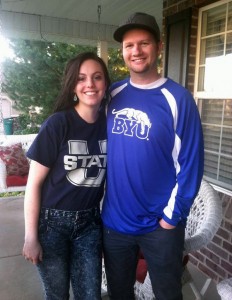 Cambri Spear — despite being a Ute fan — attended Utah State University, where she tried to convince her BYU fan husband, Jeff, to attend for grad school. However, Jeff chose to get his Master of Healthcare Administration at the University of Utah. (Photo courtesy Jeff Spear)

“It’s just what we do,” he says. “I always cheered for Utah in the sense that, I wanted Utah to be really good so that when they played BYU in November, it would make BYU look better after beating Utah. Now, I cheer for Utah in a different sense. I want them to succeed in the Pac-12.”

While Jeff is an unabashed, hard-core BYU fan, Cambri prefers to put football in perspective. She doesn’t get too hung up on the rivalry. For her, cheering for the Utes and going to Utah football games was part of her childhood. Besides having a little schoolgirl crush on former Ute quarterback Alex Smith years ago, she doesn’t become emotionally involved.

She adds that as a Utah State student, when Utah played the Aggies in Logan, she cheered for USU. “But I felt conflicted,” she says.

For Jeff, BYU and the rivalry are in his DNA, and it’s not likely going away anytime soon. Cambri says Jeff can get emotionally invested in sports, especially when it comes to BYU.

“We’ve only been married for three years. BYU hasn’t had success (against Utah) and Cambri’s seen me mad, frustrated and depressed about it,” Jeff says. “Those are normal emotions for me during football season, but I don’t think she was quite used to that.”

Last December, when BYU and Utah squared off in the Las Vegas Bowl, Jeff was looking forward to the matchup. But then the Utes jumped out to a 35–0 lead in the first quarter.

“He got really depressed and angry,” Cambri said. “I didn’t know how to respond. It was like the reverse of the stereotype. The emotional, volatile girl and the guy saying, ‘I don’t know how to handle this.’ I was like, ‘He’s very emotional right now, and I don’t understand at all what’s going on. Do you want some chocolate?’”

“(Jeff) got really depressed and angry. I didn’t know how to respond. It was like the reverse of the stereotype. … I was like, ‘He’s very emotional right now, and I don’t understand at all what’s going on. Do you want some chocolate?’” —Cambri Spear, Ute fan

Jeff spent the rest of his day escaping reality by doing some very practical things during the game. He got a flu shot. He got the oil in his car changed.

“I had to cool off,” he explains. “I decided to do those chores that you put off.”

BYU rallied to cut the deficit to 35–28 in the fourth quarter, but Utah held on for the victory.

“I recorded the game but I didn’t end up watching it,” he says. “I get really emotionally involved and it puts Cambri on edge a little bit. She got upset at me because I was so emotional about it.”

With coach Kalani Sitake, who spent 10 years of his coaching career at Utah, taking the reins of BYU’s football program, the rivalry may reveal a kinder, gentler side. Maybe.

Sitake and Utah coach Kyle Whittingham worked together for a decade and are good friends. And Sitake hired a bunch of other former Cougars on his staff like Ty Detmer and Ed Lamb, who are almost universally respected, even by Utah fans.

“When BYU started hiring the new coaches, my father-in-law said it would be hard to hate BYU now,” Jeff says. “It’s because of how the program’s culture has shifted. It’s a different BYU to them.”

Now that the much-anticipated BYU-Utah game is swiftly approaching, how will the Spears handle watching this year’s showdown?

Jeff jokes about watching it with the raucous, red-clad MUSS — the Mighty Utah Student Section — since he is now a U student.

“You’re not watching it in the MUSS,” Cambri tells him.

“We’re going to have to figure it out,” Jeff replies. “Maybe we’ll try to have my family and your family watch it at the same place and see what happens.”

Both sets of in-laws on opposite sides of the rivalry coming together to watch BYU and Utah? That might be even more entertaining than the actual game.

Even amid a heated rivalry, can’t Utes and Cougars just get along? Yes they can. Just ask Jeff and Cambri Spear.