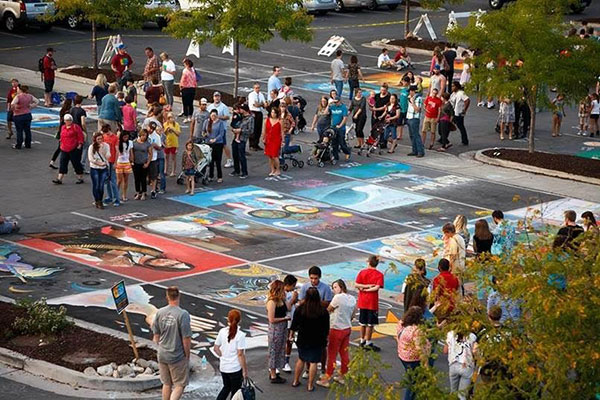 Once a year, animals, superheroes and more scenes grace the parking lot of The Shops at Riverwoods in all their chalky glory. But the beginning wasn’t glorious — it was a mad rush.

When Charity Square and The Shops at Riverwoods originally considered starting a chalk festival in 2012, they had a fast turn around. At the request of the planning committee, a team flew to Denver in June 2012 to check out a chalk event. Upon arriving back in Utah and agreeing that they should host a chalk festival, the committee asked them to plan and execute the first Chalk the Block™ in just three months.

“It was really fast to put together, but the community responded,” said McKell Law, Chalk the Block™ board member. “They were really excited about the opportunity. We couldn’t have done it without the local artists.”

Now in its fifth year, Chalk the Block™ is better and larger than it has ever been.

“I think the reason it’s been so successful is because the community members have really responded to this event in Utah County,” Law said. … “It appeals to such a wide audience: anyone from old to young, high school students and families.”

“I think the reason (Chalk the Block™ has) been so successful is because the community members have really responded to this event in Utah County.” —McKell Law, Chalk the Block™ board member

Chalk the Block™ — which is from Sept. 22–24 — features 400 local artists. These artists have three days to create a chalk masterpiece in a 9-by-16 foot spot in the north and south parking lots at The Shops at Riverwoods. Some of these spots are designed and drawn by local high school teams and others are prepared by professionals. 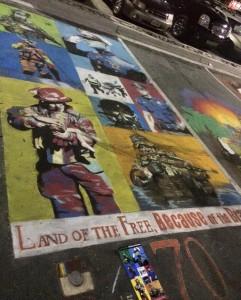 Besides the 400 local chalk artists, this year Chalk the Block™ is expanding to look at local artisans. The Shops at Riverwoods has invited artisans from a variety of mediums including a glass worker, potter, saddle maker, leather worker and more.

“We’re really excited about the different dimension that adds to the festival,” Law said.

The proceeds beyond what it takes to put on the festival go to the Utah Autism Academy, a nonprofit organization that provides services for children and young adults with Autism Spectrum Disorders.

“We are grateful for the opportunity to bring awareness of autism to those in the Utah County area and hope to be able to continue the partnership with Utah Autism Academy for many years to come,” Law said.

Chalk the Block™ is Sept. 22–24 (main festival dates being the 23rd and 24th) from 10 a.m. to 9 p.m. at the Shops at the Riverwoods in Provo, Utah. The event is free to attend. Learn more about Chalk the Block™ at chalktheblock.net.

Celebrity lookalikes: 8 locals who are totally twinning with celebrities Next post