Celebrity lookalikes: 8 locals who are totally twinning with celebrities

These local lookalikes and their celebrity counterparts aren’t related — but their bone structure begs to differ. From NBA ballers to Broadway belters, this year’s collection of lookalikes is totally twinning. 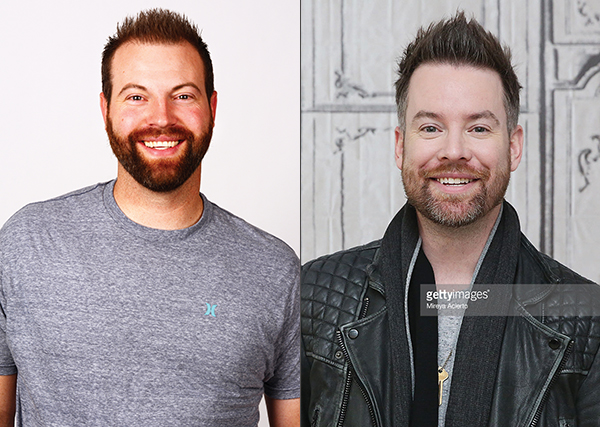 JD Mallder looks like David Cook, and his middle name is David — but that is where the similarities end. JD only watched American Idol for a couple seasons and prefers Michael Bublé and Frank Sinatra to his celebrity counterpart.

JD does know a thing oR two about food though. He studied food science at BYU and actually helped create the delicious Otis Spunkmeyer Raspberry Cheesecake cookie (it’s amazing and you need it in your life).

After spending several years working in the Bay area, JD returned to Utah for a job opportunity with Chameleon Colors. The company does dry blend manufacturing, which is just a fancy way of saying that they make the colored powder used in color runs.

When JD isn’t working, you can find him on the Provo River fly fishing.

Who is David Cook?

David Cook won the seventh season of American Idol when he beat out Utahn David Archuleta. The Missouri native sang Bon Jovi’s “Living On A Prayer” for his American Idol audition. After Idol, David released an eponymous album that went platinum in early 2009. 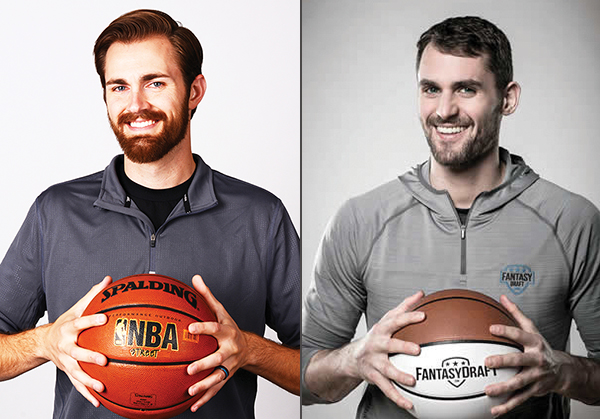 “I retired from basketball fairly young to prevent tarnishing my record in Jr. Jazz,” Brady jokes. “We lost the regional championship twice.”

Brady uses his 6’7” frame for comedy these days. He performs with groups including ComedySportz, Crowdsourced Comedy and ImprovBroadway. Brady is also on the Board of Directors for the Spanish Fork/Salem Area Chamber of Commerce. He actually met his wife Gracie on assignment for the chamber at an elementary school assembly. Brady works in the marketing and business development department for SERVPRO of Provo.

While Brady loves a good laugh, he knows what sorrow is all about having lost his younger brother Alex who was hit by a Trax train in Salt Lake City.

“With faith in higher power and a greater plan, alongside an unfathomable outpouring of love from extended family and friends, my family and I were able to brave the worst of the storm that is the loss of a loved one,” Brady says.

Who is Kevin Love?

Kevin Love is a power forward/center for the NBA’s Cleveland Cavaliers. After a college career at UCLA, Kevin played for the Minnesota Timberwolves for six years before joining the Cavs in 2014. 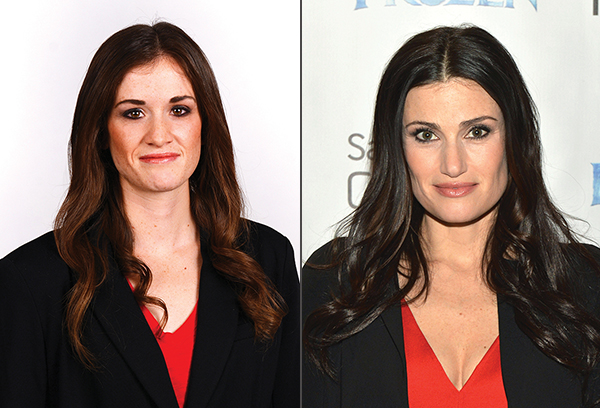 Born in Texas, Josie Riggs moved to Highland when her father retired from the Air Force. She is currently pursuing nursing at Southern Utah University. While it took Josie a while to figure out what she wanted to study, now she can’t wait to become nurse.

Josie is also an athlete and runs track and cross country at SUU. She loves her sport and has worked through several injuries to maintain her skills.

“Every time I recover from an injury, I come back ready to work harder, and I know it’s worth it to push through setbacks,” Josie says.

Josie met her husband on the cross country team and the couple married in June 2015. When Josie’s photographer was editing Josie’s bridal photos, she recognized the bride’s similarity to Idina Menzel.

“I like ‘Let It Go’ and I think it’s awesome how many little girls are in love with that song,” Josie says.

Down the road, Josie hopes to be raising kids of her own and working as a nurse.

Who is Idina Menzel?

You might not recognize Idina Menzel, but if you’ve seen Frozen you’ve heard her. “Let It Go” made Idina the first Tony Award-winning actress to reach the top 10 on the Billboard Hot 100 chart. She is also known for her role as Elphaba in “Wicked” on Broadway. 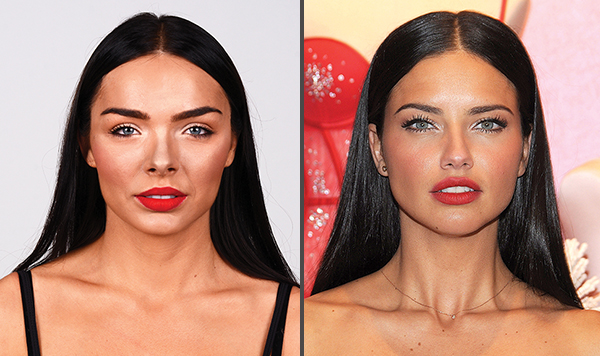 Being told you look like a supermodel is flattering, but Pleasant Grove’s Whitney Herrera thinks she resembles Adriana Lima mostly because of her dark hair and light eyes combo.

Whitney is in the business of beauty as she works at Spa Trouvé doing marketing, social media and esthetics.

Whitney and her husband Justin have two dogs — a shitsu and a cockapo. The couple, who was actually set up by Whitney’s mom, loves to spend their free time hanging out with family, shopping and snowboarding.

Who is Adriana Lima?

Brazilian supermodel Adriana Lima is Victoria Secret’s model. She moved to New York at 16 to pursue modeling and has been face of ad campaigns for brands including Maybelline, Mossimo, BCBG, Keds and Kia Motors. According to Forbes, in 2015 she was the second highest-paid model in the world with earnings of 9 million. Orem’s Misty Maile has no shortage of similarities with her celebrity lookalike Alyssa Milano. They are both 1970s babies (Alyssa is 43 and Misty is 38), they both have one sibling (a little brother) and they both have Italian ancestry. Misty has also been told she looks like yet another celebrity — Brooke Burke.

“I grew up watching Alyssa and I would sometimes pretend it was me in the episodes and I even secretly wished I was her sometimes,” Misty says.

Misty enjoys being a stay-at-home mom and caregiver to her grandmother.

“I love being able to repay my grandmother in some small way for all the years she’s taken care of me and our whole extended family.”

Misty met her husband of 20 years, Rex, at a gas station in Spanish Fork when they were both cruising Main Street. They have five children: Corey, Kaika, Kyra, Tiera and Aria, as well as one granddaughter, Leiani.

Misty loves being outdoors, especially hiking and photography. Her biggest goals for the future include travel.

Who is Alyssa Milano?

Actress Alyssa Milano became famous in the 1980s on the hit TV show “Who’s The Boss.” She went on to appear in popular shows including “Melrose Place” and “Charmed.” Her recent work includes ABC’s “Mistresses.” 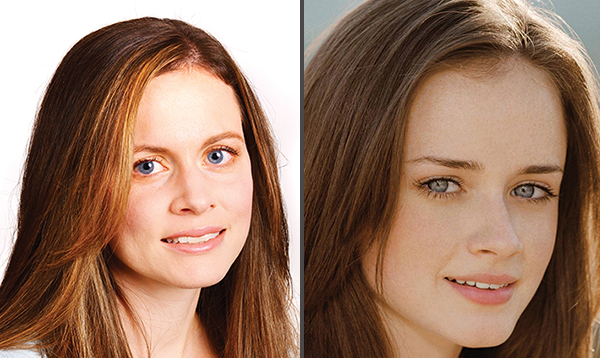 Highland’s Kristin Gourley has her hands full with five kids under the age of eight. When people ask her “How do you do it?” she answers, “I have no idea what I’m doing, I just know I have to do it!”

Kristin grew up Louisville, Kentucky, and came to Utah for an academic scholarship at the University of Utah. She met her husband of 10 years, Paul, at school. After getting married, the couple moved to Georgia and later North Carolina before coming back to Utah for a job opportunity.

As a certified lactation consultant, Kristin works with Lactation Link doing breastfeeding consultations with moms and babies throughout the valley.

The Alexis Bledel thing? Kristin has been told repeatedly and consistently that she looks like the celebrity since high school. And while Kristin has not watched “Gilmore Girls” yet, she plans on watching it this fall so she can be caught up for the re-boot.

Ten years from now, Kristin hopes her kids are all successful in their individual endeavors and that she will be sleeping through the night. As far as biggest blessings go, Kristin quickly names her husband, children and her conversion to the LDS Church at age 17.

Who is Alexis Bledel?

Actress Alexis Biedel is best known for her breakout role as Rory Gilmore on “Gilmore Girls.” She is slated to appear in Netflix’s revival of the show this November. The 34-year-old actress and new mom has also appeared in movies including “Sisterhood of the Traveling Pants” and “Sin City.” 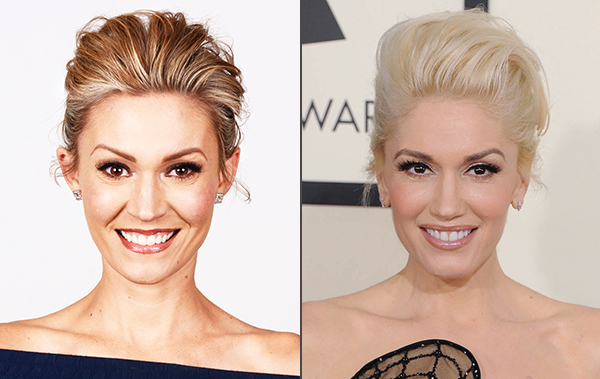 Lindsay Bunker is an Orem native and a huge fan of her celebrity lookalike Gwen Stefani. She grew up listening to No Doubt in junior high school and loves unique fashion just like Gwen does.

Lindsay’s artistic eye goes beyond fashion, however. She also has amazing interior design skills and has used them to stage homes for the Utah Valley Parade of Homes. Lindsay also arranges wedding flowers.

“I’m a plant hoarder,” she jokes. “I have a thing for succulents.”

like most of the lookalikes featured in this issue, Lindsay has been told she looks like more than one celebrity. She resembles actress Kelly Carlson in addition to Gwen. (Editor’s note: We see a young Faith Hill in her, too!)

Lindsay’s husband, Ryan, is also a celebrity lookalike. He appeared in Utah Valley Magazine’s 2014 issue as the “double take” of Rick Grimes from “The Walking Dead.” Talk about a famous household!

Lindsay has two step-daughters, a step-son and an 11-year-old son.

Who is Gwen Stefani?

Gwen Stefani became famous as the lead singer of No Doubt. After the band broke up, she experienced solo success with three albums and a clothing line called L.A.M.B.  The mother-of-three appeared as a mentor on NBC’s “The Voice.” 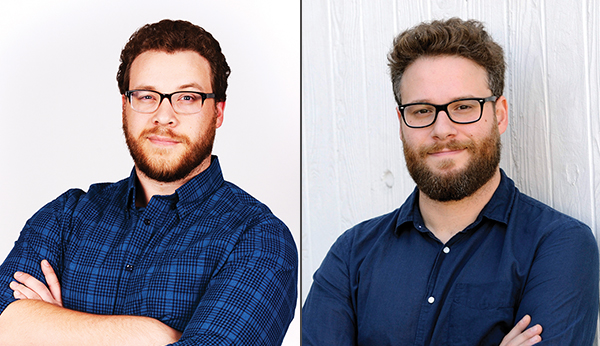 Not only does Mike Schwartz look like Seth Rogen, he has the celebrity’s signature guttural laugh down pat.

“Someone tells me that I remind them of Seth Rogen at least once a week,” Mike says.

Mike grew up in Washington and now works as technical writer for Novarad. He also does sports writing for isportsweb.com where his specialty is covering major league baseball teams including the San Francisco Giants, the Seattle Mariners and Colorado Rockies.

“That is my ultimate dream job, to get to write about baseball every day,” he says.

Mike met his wife, Jenna, on Tinder. (That is sooooo 2016.) The couple lives in Provo and have been married for just over a year.

Who is Seth Rogen?

Canadian born Seth Rogen is an actor, filmmaker and comedian. His more prominent work includes “Freaks and Geeks” and “Knocked Up.” In 2015, he co-starred as Steve Wozniak in Universal Studio’s Steve Jobs biopic. 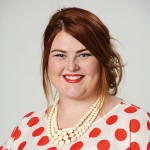 Hair and makeup stylist Bronwyn Haws gave our lookalikes the red-carpet treatment to help them closely match their celebrity counterpart. Bronwyn graduated from Renaissance Academie and specializes in bridal and event styling at Suggestions Salon (801-226-6993).