How I Became Known as ‘The Next John Bytheway’ 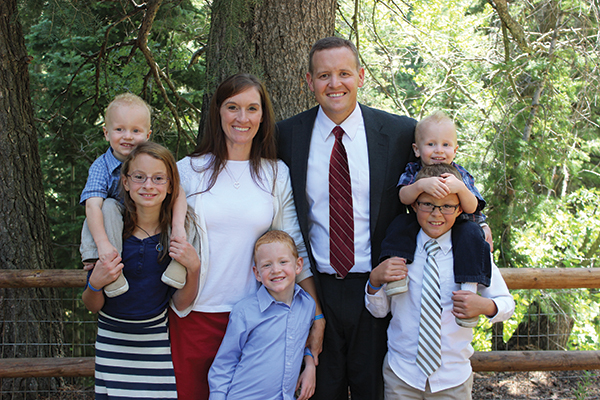 Hank says, “It’s almost a sin how much I love this woman.” He and Sara are raising “the five best kids on the planet. They are everything to us!”

Fast-talking Hank Smith has 17 CDs of his famously funny and gospel-packed messages especially for youth. But he also “speaks adult” as a corporate trainer and headline speaker at BYU’s Easter Conference and RootsTech. But this father of five does the listening when he gets told almost daily that he’s the next version of everyone’s favorite LDS speaker.

I grew up as the son of a golf professional in St. George. I was the student body vice president and captain of the football team at Snow Canyon, so I got used to speaking to large groups early on. After I graduated in 1996, my dad thought I could use a change of geography and sent me to Southern Virginia where his college roommate had just bought a university. While I was back there, my sister put me in contact with EFY, and I got asked to be a counselor for one week. I wrote in my journal that I wanted to do something like that for the rest of my life. That’s a weird thing to say at age 18.

When I returned from my mission in Fresno, Calif., I worked 10 weeks of EFY. Some people are terrified of speaking to youth, but to me it’s a source of energy. 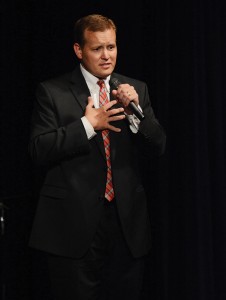 Mapleton’s Hank Smith spoke at a Sunday night fireside as part of Salem Days this past summer. He has quickly become the most sought-after speaker in Utah Valley and beyond for his humor and ability to connect with youth — including on social media (@hankrsmith on Twitter/Instagram and fb.com/hanksmithcds on Facebook).

I was married in 2000 and was pursuing a degree in business at Dixie. One of my friends from EFY was a seminary teacher and asked me to sub his class for two weeks while he had back surgery. It paid better than my landscaping job, and it was inside — remember this was St. George, so air conditioning was the determining factor. A few weeks later, I received a job offer to teach seminary part time at the same high school where I graduated. The guy hired me without ever seeing me teach, but he had heard positive feedback. I taught seminary during my junior and senior years of college, and by then I had fallen in love with the job. I felt bad for my wife, Sara, because she thought she was marrying a businessman.

My first full-time job was in Park City, which is where our first baby was born. That changes everything! Instead of asking, “What do you want to do this weekend,” you’re like, “How do I bathe this thing?” After three years we moved to Copper Hills in West Jordan. Along the way I earned a doctorate from BYU. My dissertation was on how trust between faculty members impacts student achievement. I spoke on that topic yesterday for the Washington County School District.

I taught at BYU while I was working on my doctorate, and then I was assigned to Springville High School. After two and a half years there, I came back to BYU after the longest hiring process of my life. I became a full-time faculty member a few months ago. I still feel like an intruder around here. I do not belong across the hallway from Daniel Judd! I see Andrew Skinner in the hallway. I hang out with my heroes. The BYU Religion Department does an excellent job of balancing the academic side of religion with faith-building.

My most effective teaching tool is humor. Kids deserve to laugh, and they can learn while laughing. The Holy Ghost speaks to me through humor all the time.

I’m a storyteller at heart, and a good story has a cast. I use different voices when I teach — Laman, Nephi, Dumbledore. The youth are spiritually sensitive! They are funny. They are resilient. I had a colleague tell me he figured out why I’m so good at this. He said, “You like the youth! A lot of us like them because we are supposed to, but you genuinely enjoy being with them.”

And I do. Kids can tell when their teachers or leaders don’t want to be there. My heart really loves them. I listen to see what they are dealing with — but I’m getting too old for pop culture. They’ll mention something about a Kardashian, and I’m like, “Is that the name of a donut?”

“I’m a storyteller at heart, and a good story has a cast. I use different voices when I teach — Laman, Nephi, Dumbledore.” —Hank Smith, speaker

I am told nearly every day that I’m “the next John Bytheway.” I don’t know if I can handle that type of pressure! John is absolutely amazing. I’m not even close to being as good as he is. He paved this road I’m lucky enough to be on. My family listened to him yesterday on the way home from St. George, and I texted him and told him how much my kids loved his message. The fact that he and I are friends is still shocking to me.

The first time I met John was several years ago when a guy in California asked me to speak to an encampment with 5,000 scouts. When I got the flier about the event, it showed that I was speaking alongside John Bytheway and Elder L. Tom Perry. My wife said, “Is this for real? I think someone is pranking you!” I knew I didn’t fit in, but they were very kind to me. 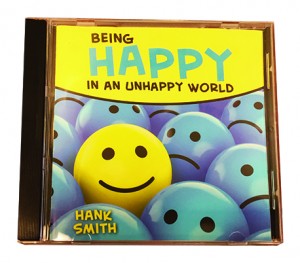 Now I travel with John and Meg Johnson as we host conferences titled “When Life Gets Hard.” John is the reason people come, Meg is the speaker they go home talking about, and I’m there for … well, I’m not quite sure. We did seven of these events this year, including an Alaskan cruise with 250 people who came to hear us speak. One year I spoke 100 times at girls camps, firesides and other church meetings. This helped me get better at speaking and it gave me easy chances to record my message.

My first talk on CD might have sold a few hundred copies. It wasn’t flying off the shelves, but it was helping some families. They asked me to do another one. And now I just finished recording my 17th CD.

My wife once said to me, “I envy people who listen to your CDs … because they have a stop button if they need you to be quiet for a minute.” Sara plays a Savior-like role to me. It’s almost a sin how much I love this woman. I thought I was at my max goodness and she took me to new heights. I hope I’m helping somebody to be their best selves, too.

I treasure some of the letters I’ve received … “I’m an 11-year-old living on an army base in Berlin and I listen to your CDs as I go to sleep” … or the letters I get from single moms. Both of my sisters are single moms, so those are touching to me.

I also use social media to expand the classroom and reach people I’d never reach. I love speaking at schools and corporations for that very reason. Plus, the high-fives I get are pretty awesome.

The two sides of my heart are being with my wife and five kids and then also helping other people when I can. I feel strongly about using my unique gifts to help others — both inside and outside the LDS Church.

5 encouraging phrases that will make kids smile Next post