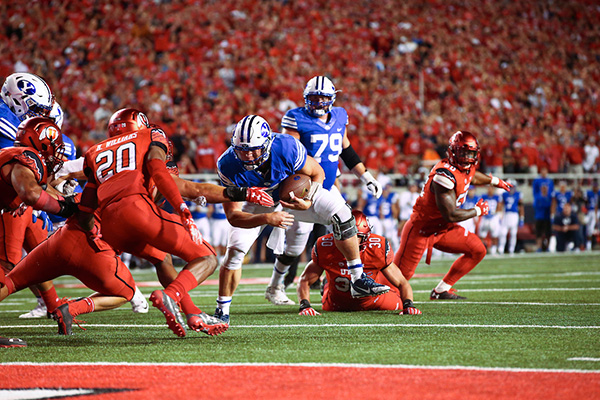 SALT LAKE CITY – A familiar scenario played out for BYU. Once again, the Cougars battled Utah down to the final play with a shot at clinching a dramatic victory. Unlike John Beck in 2006 and Max Hall in 2009, Taysom Hill could not deliver one final winning play for BYU at the end.

Hill was stopped by senior defensive end Hunter Dimick on a two-point conversion run after scoring a touchdown with 18 seconds left. It allowed Utah to escape with a 20–19 victory and notch their sixth straight win against the Cougars.

The Utes prevailed in a sloppy game marked by tons of turnovers. BYU forced six turnovers, but only scored 13 points off those miscues.

“If you had told me they’d turn it over six times and win the game, I would have said you were crazy,” Hill said.

Five plays had a profound impact on BYU coming up short against the Utes once again.

BYU took a calculated risk and decided not to force overtime on the final drive. After getting the ball back following a 29-yard field goal from Andy Phillips with 2:47 remaining, the Cougars went 75 yards in 13 plays to score their second touchdown of the night. Hill ran in untouched from seven yards out to cut Utah’s lead to one with 18 seconds left.

Without any hesitation, BYU elected to try for a two-point conversion. Hill came up short on the play when Dimick read the run option and stuffed him a few yards short of the goal line.

BYU coach Kalani Sitake thought it was the right play call at the time and still felt that way after it didn’t work out.

“Why not?” Sitake said. “We had Taysom Hill. We had some momentum. We told them right before the offense went out. We said we were going for two. That was the plan. Our guys knew it and they were ready for it. They just made a play and we didn’t. I’d do it again.”

“We had Taysom Hill. We had some momentum. We told them right before the offense went out. We said we were going for two. That was the plan. Our guys knew it and they were ready for it. They just made a play and we didn’t. I’d do it again.” —Kalani Sitake, BYU head football coach

For a short time in the first quarter, it appeared BYU was going to relive its Las Vegas Bowl nightmare. Utah linebacker Sunia Tauteoli snagged a tipped ball on BYU’s first play from scrimmage and returned it 41 yards for a touchdown. It gave the Utes a 7–0 lead just 16 seconds into the game.

The quick turnover rattled the Cougars early. BYU generated a total of 49 yards on its next five drives combined before finally putting together an 80-yard scoring drive late in the second quarter.

“It was an unlucky play for us,” Hill said. “The timing was off. We had an unlucky bounce, but it is what it is. We couldn’t change what happened, so I wasn’t going to let that affect how we played in the future.” 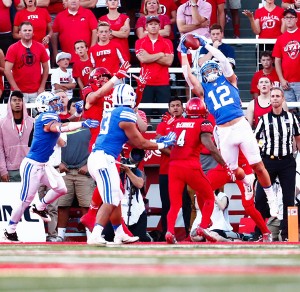 Nacua helped BYU regain some much needed momentum when he recovered a fumble after Francis Bernard stripped the ball from Utah receiver Raelon Singeton at the end of the Utes’ second play on offense. His bigger defensive play came later in the second quarter. The senior safety picked off a pass from Utah quarterback Troy Williams in the end zone with the Utes threatening to add to a 7–6 lead.

Nacua’s interception gave BYU’s offense a renewed spark. The Cougars responded by going 80 yards in five plays to take a 13–7 lead with 3:58 left before halftime. Hill capped off the drive by breaking free for a 39-yard touchdown run.

BYU lost not one, but two players to ejections from targeting penalties on back-to-back plays in the fourth quarter. Nacua was ejected first after a hit on Utah receiver Demari Simpkins even though the TV replay showed that he appeared to lead with his shoulder instead of his helmet. Sitake protested the call and was tagged with a 15-yard penalty for unsportsmanlike conduct.

On the next play, Bernard picked off a pass from Williams. This time, Austin McChesney was ejected for targeting after he hit Utes running back Troy McCormick on the play.

After punting less than a minute into the fourth quarter, BYU put Utah up against the wall to start its subsequent drive. Jonny Linehan punted 35 yards, pinning the Utes at their own 10-yard line. Joe Williams and Troy Williams lost a combined total of five yards on the next two plays, putting Utah in a 3rd-and-15 situation at its own 5.

The Cougars blew a chance at forcing a 3-and-out. Chris Wilcox got called for pass interference on Utah receiver Tim Patrick. It kept the drive alive and the Utes made BYU pay. Utah put together a 19 play drive that covered 78 yards and burned 11:21 off the clock. It ended in Phillips’ second field goal of the night that gave Utah enough of a cushion to withstand BYU’s comeback at the end.

How I Earned the Miss Utah Crown Previous post