With homecoming around the corner for most Utah high schools, one Springville High student is making his date feel extra special with an above-and-beyond homecoming invitation. 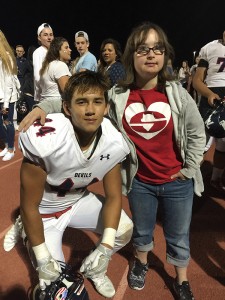 Taylee Smith, right, came to support Bradley Nicol, left, at his football game after being invited to homecoming by Nicol with a unique vidoe. (Photo courtesy Bradley Nicol)

So Nicol set out to help Smith feel like every other high school student. While he initially planned a simple invitation to homecoming — dropping off a poster at Smith’s house — inspiration struck and the poster no longer seemed like enough.

He recruited his friend, who is also a junior at Springville High, to help him. Josh Comer had the talent and the equipment to film a homecoming invitation video, so the two brainstormed ideas together.

“One of the first things that I proposed to Josh was to make a video where it shows me getting all the stuff to ask her to homecoming,” Nicol said, “and then have me go up to her door to knock. But instead of knocking in the video, I’d knock in real life.

And Smith’s inception homecoming invitation was born. But the duo needed a little more help from their friends before pulling off the video stunt. They recruited their friend Anna Brower to write the posters for the video. Then they got Smith’s parents on board.

“The video wouldn’t have been possible without (her parents),” Nicol said. “They are the ones that showed the video to Taylee, and they also told us when to knock on the door at the right time to have it in sync with the video. We also handed them a GoPro camera and they recorded her reaction for us.”

Nicol and Smith will attend Springville High School’s homecoming dance on Saturday, Sept. 17, with a large group of friends, including Comer.

“With a big group of boys planning, we really don’t have any set plans yet,” Nicol said. “All I know is that we are going to have a rockin’ time!”

How I Became Known as ‘The Next John Bytheway’ Next post