Stand with Sitake: Why I support BYU’s 2-point conversion decision against Utah 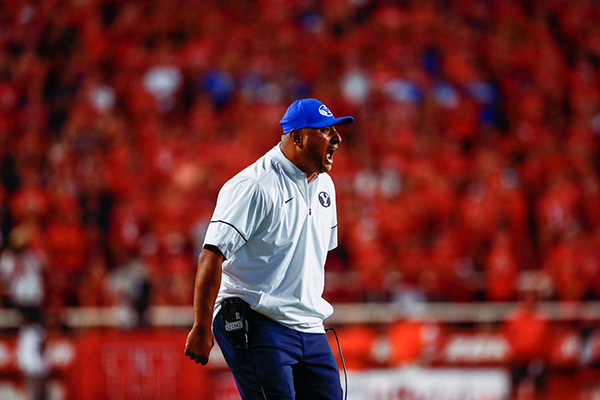 BYU took a leap of faith and stumbled in a 20–19 loss to Utah Saturday night.

With less than a minute left in the game, BYU senior quarterback Taysom Hill ran the ball into the end zone, bringing the Cougars to within one point of Utah. Cougar fans sat on pins and needles awaiting the coaches play decision: would new BYU head coach Kalani Sitake opt for the PAT — sending the game into overtime — or would he take the risk to win the game with a 2-point conversion? He went for the 2-point conversion.

Hill was taken down before he could reach the end zone. Game over.

In the post-game press conference, Sitake told reporters the 2-point conversion was “not the wrong call.” In fact, it was the plan all along.

“Why not?” Sitake said. “We had Taysom Hill. We had some momentum. We told them right before the offense went out. We said we were going for two. That was the plan. Our guys knew it and they were ready for it. They just made a play and we didn’t. I’d do it again.”

Hindsight is supposed to be the clearest vision, so why wouldn’t Sitake regret the failed 2-point conversion play? Gumption.

Real competitors do just what the cliche saying attests: “Winners play to win, not not to lose.”

Real competitors do just what the cliche saying attests: “Winners play to win, not not to lose.”

And BYU’s football program is full of real competitors. (Take note Big 12.) And that is how Sitake led his team.

Before the season began, BYU fans encapsulated the new coaching staff into this box of perfection and it was hard to believe — despite all logic — that that view could ever be tainted.

My interactions with Sitake have been limited. They’ve been more roles as the media from a distance. I was on the floor taking pictures when he was introduced along with his staff at a BYU basketball game. I was there when he decided he wanted more of a Cougar fan experience by joining the student section at a basketball game. Then I briefly interviewed him at Media Day, when he stopped by our booth without being prompted and remembered the staff who had helped on his photo shoot for Utah Valley Magazine.

Then there are all the firsthand experiences I’ve heard. I heard stories about Sitake as a person after Utah Valley Magazine editor Jeanette Bennett interviewed the Sitakes for our magazine’s cover story. I heard stories about Sitake asking Cougar fans to stop by his office — whether they were about to be deployed across seas to serve in the U.S. Air Force or just because  — and how Kalani Sitake took time out of his schedule to talk to these fans. We saw the soft and friendly teddy bear side.

And then big papa bear was unleashed.

BYU coach Kalani Sitake does NOT like your calls, Mr. Referee pic.twitter.com/YHd9zLvvBt

When Kai Nacua was ejected from the game for a targeting, we saw the Band of Brothers’ papa tear into the refs, receiving his own penalty. Behind the Cougar fan known as BYU’s head football coach, there is a fierce competitor, a protector and a coach that understands “the greater the risk, the greater the payoff.”

“To end his night on that, it was difficult for me to deal with … I will always have our guys’ back — always,” Sitake said in the press conference following the game.

After the game concluded, I was grateful there were minimal degrading statements moving through my social media feed about wanting Bronco Mendenhall back and hatred for the coaching staff. But they still existed.

Is the honeymoon phase already over? Does it just take one loss — or one call you may disagree with — for Sitake to no longer be our man? No. Can we be BYU fans and not hold the same tenacity as the football staff? No. We need to be competitors like our coaches and players. Stand with Sitake. Rep the Y.

As for me, I’d choose a coach who goes for the 2-point conversion any day.