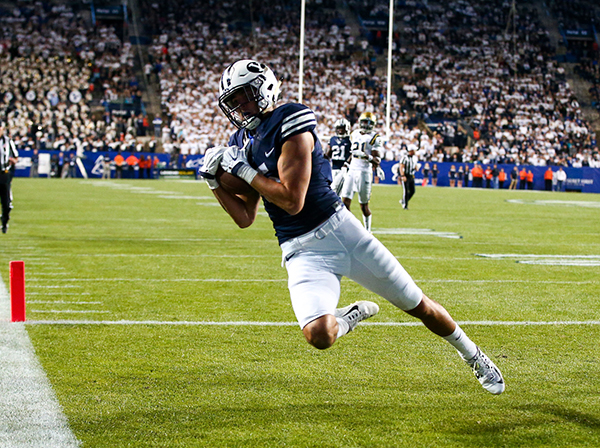 For the second consecutive week, BYU walked away with a close loss to a Pac-12 opponent. The Cougars could do little to stimulate their offense in a 17–14 loss to UCLA. BYU totaled just 273 yards and 91 yards came on the Cougars’ final scoring drive.

It marked the first time BYU lost a home opener since falling to Utah 54–10 in 2011. The loss raised serious questions about the offense’s ability to produce against tough competition going forward.

“Yeah, it’s gut check time,” head coach Kalani Sitake said. “You can either let adversity divide you or unite you. I think our team is united. We are all on the same page and nobody is pointing fingers or blaming anybody else. We just have to be better in some phases than others. Nothing is going to divide this team, we will come back together stronger. That is the answer. We just have to get to work.”

BYU’s most pronounced offensive struggles came in the run game. The Cougars were held to 23 rushing yards.

Like against Utah a week earlier, BYU had some opportunities to take control early but let things slip away early through a combination of anemic offense and a few defensive lapses at critical moments.

“I felt like we had a good week of preparation, but we didn’t execute like we should have nor well enough to win a football game,” Cougars quarterback Taysom Hill said.

Five plays in particular changed the course of the game for BYU on Saturday night.

“You can either let adversity divide you or unite you. I think our team is united.” —Kalani Sitake, BYU head football coach

UCLA converted three straight third downs on its final scoring drive in the third quarter. The final conversion in that sequence ended up being Josh Rosen’s 33 yard strike to Darren Andrews on a crossing route. Andrews raced into the end zone untouched and put the Bruins up 17–0.

That play provided the game-winning margin for UCLA. Before that drive, the Bruins had gone 0-of-8 on third downs. UCLA converted just 6-of-17 third downs during the whole game.

BYU had a golden opportunity to take a lead in the first quarter when Fred Warner intercepted a pass by Rosen at the UCLA 33-yard line. The Cougars quickly went 3-and-out on the ensuing drive, however, and were forced to punt.

A promising drive unraveled when UCLA defensive end Rick Wade sacked Taysom Hill on second down and dropped the senior for a 13-yard loss. The sack took BYU out of field goal range and kept the Cougars off the board until late in the third quarter.

Hill ended up being sacked a total of four times and finished with minus 7 rushing yards on 10 carries.

“We made a huge emphasis on stopping the run,” UCLA coach Jim Mora said. “We felt it was imperative that we not let the quarterback get out and go with his legs.”

In a game with so few points, a second quarter interception by Bruins safety Adarius Pickett made a huge impact. Pickett dove for a tipped ball that bounced off Colby Pearson’s hands and corralled it at the BYU 39. The Cougar defense stiffened in the red zone, but UCLA still cashed in with a 24-yard field goal from J.J. Molson to take a 10–0 lead into halftime.

It ended up being BYU’s lone turnover, but those three points gave the Bruins enough of a cushion in late in the fourth quarter to help prevent the Cougars from forcing overtime.

Facing a 3rd-and-4 at the Bruin 25, Hill rolled out of the pocket and raced for the first down before sliding to safety at the 14-yard line. His run set up BYU’s first touchdown with 3:07 left in the third quarter and gave the Cougars a glimmer of hope for making a comeback.

Productive drives like that one have been rare for BYU this season.

“We’ve got to start clicking offensively,” Sitake said. “We need to be able to sustain that and be more consistent. That’s what our focus is going to be next week.”

After forcing a quick UCLA punt early in the fourth quarter, BYU started putting together a promising drive with 11:37 left. Hill completed back-to-back passes to Moroni Laulu-Pututau covering 21 total yards and moved the Cougars past midfield. The drive stalled after a disastrous second down.

On 2nd-and-10 from the UCLA 48, Hill was hit by Bruin linebacker Jaylon Brown. He coughed up the ball and Tejan Koroma fell on it at the 50. BYU was flagged for holding on the same play, moving the ball back to the BYU 42. The Cougars punted two plays later.

It proved costly since UCLA burned five minutes off the clock on its next drive before BYU could finally get the ball back with only 2:16 left to score twice.

How I Biked to Every LDS Temple in Utah Previous post