Free Krispy Kreme donuts for Talk Like a Pirate Day 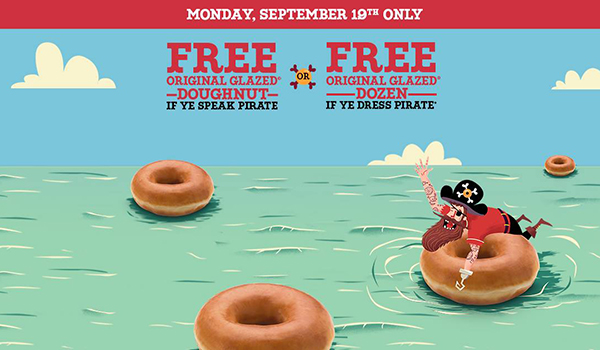 ARR you ready to talk like a pirate in order to get a free donut at Krispy Kreme?

Monday, Sept. 19 is the nonsensical holiday, Talk Like a Pirate Day, and Krispy Kreme is giving out a pirate’s bounty (or at least a golden doughnut).

Customers can receive one free Original Glazed doughnut for talking with the swashbuckling jargon. By dressing up like a pirate — costumes need to include three pirate pieces — customers can receive a free dozen of Original Glazed doughnuts. If you don’t have a pirate costume, you can digitally dress like a pirate on Snapchat with Krispy Kreme’s Snapchat filter. Just take a snap and show it at the cash register.

Be prepared to stand in line because there was a long line as of Monday morning at the Orem, Utah location at 417 West University Pkwy. Learn more about the promotion here.