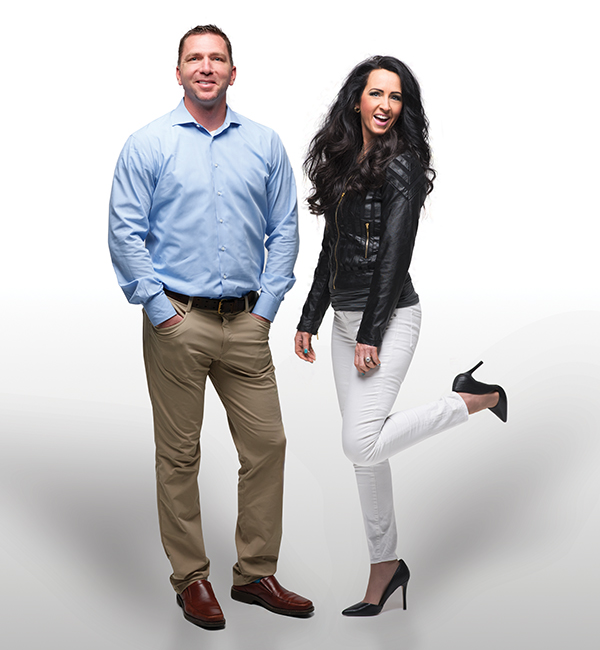 RULEBREAKERS + RECORD-MAKERS
When Derek Maxfield and Melanie Huscroft were growing up as siblings in a family with seven children, Huscroft was known as the one who made the rules on game night. “There was no need to consult the back of the gameboard — we played by her rules,” Maxfield says. Now this brother-sister duo are rewriting the rulebook of direct sales companies, and 500,000 Younique presenters have batted an eyelash in their direction.

You can’t makeup this story. Derek Maxfield was enjoying the fruits of a successful software exit when he kept percolating ideas of how to uplift, empower and validate women. Maxfield and his sister Melanie Huscroft combined their beautiful skill sets and created the startup that now has a giant purple footprint at the Point of the Mountain. In 2014, Younique went from an impressive $1 million a month in sales to a lash-tastic $40 million in monthly revenue. “I don’t believe that has ever been done by any beauty or direct sales company,” Maxfield says. But he never lip-glosses over what he sees as the real reason for the growth. The Younique Foundation has helped more than 1,000 who were sexually abused as children by hosting four-day retreats, which include education and therapy. Color us impressed.

I loved my company NetSteps and my network marketing clients who used our software. When I decided to sell it after nine years, I made my decision based on wanting to be financially secure as a family.

I am confident, but I’m also self-aware of my weaknesses. I stutter and I don’t like to be in the spotlight. So after my exit I wanted to step away and be a programmer again. It’s still a dream of mine to put on headphones and listen to Enya for eight hours while I write code.

I kept remembering a promise I made to a friend when we were both being treated for cancer about 17 years ago. I told him I would go on and live life for both of us — full of purpose. And that promise is the seed that got me wanting to start a business again and make a difference in the world. In 2012, I was talking to my wife about somebody who had been sexually abused and had taken the shame of it on herself. I remember thinking, “That is so unjust! Somebody should do something about that and tell the world it’s not your fault if you’ve been abused!”

“To see good things happen for women through Younique is by far the best part.”

The Younique Foundation, which helps women who suffered from childhood sexual abuse, is the reason we exist. I was driving home one day and realized if I could create a company that was successful enough, we could be the voice. I knew my wife, Shelaine, (who is now president of the foundation) would feel passionate about the mission. For six months, I worked on a software platform while Melanie focused on products. From the beginning, my sister and I wore many hats and didn’t overlap roles much. We still have at least two meetings a week with just the two of us.

In my previous company, I had been telling clients to focus on digital sharing as a way of growing their direct sales business. We decided to make Younique a digital-first company, which took the home party model and turned it on its head. Instead of having to clean your house, to get somebody to watch the kids and to invite friends over to possibly sell $300 in product, these women can fit virtual parties into their lifestyle without all the friction of hosting a party. The model works.

I’m logical and technical, while Melanie is creative and follows her instincts. She is our target consumer. She was a stay-at-home mom for 16 years and now she’s using her ability to create things. She’s relentless. If she decides something is going to happen, there’s no stopping her.

“Younique is a mission-first organization, and we believe focusing on our important cause is one of the reasons we’ve had crazy growth. God has blessed Younique because the foundation needed to be created now — and you can print that.” — Derek Maxfield, Younique co-founder

Back in 2014 when Younique started blowing up, we were on Main Street in Pleasant Grove. We call it our “Dollar Store campus” — and we stretched the facility to its limits. In May of that year, we had a million-dollar sales day with our Mother’s Day gift bag — even though we felt like a little startup. At one point we had 40 storage units where we kept our inventory, and our employees would do daily runs to get products for shipping. I have fond memories of what we did with our limited capacity. Now we have a 200,000-square-foot campus, with plans to grow.

There are 500,000 presenters of Younique products and there are 500 of us. At corporate, our motto is: “We are a mission first company. We serve the presenters. Keep it simple. Keep it special.” We figured out a way to pay our presenters the same day they sell something. That’s empowering to these women who can go buy gas or diapers within hours of a transaction. Younique is impactful for these women, not just financially but also from the standpoint of personal development and connection. Thousands of presenters paid their own airfare and $200 to attend our convention this year. We had One Republic put on a concert for us, and the decibels reached 104. At that same convention, our scientist unveiled a new lipstick from under a giant sheet. The decibels hit 105! The Y family’s excitement for the brand is off the charts.

One of the biggest changes in me is that I enjoy socializing with the presenters. In the beginning, I felt awkward and wasn’t sure how to make small talk. Now I realize that I represent something to them. I’ve embraced my role and it’s fun — I’ve never been asked to be in so many pictures before.

I’m amazed how many women don’t realize their potential or how awesome they are. We want to change that. To see good things happen for women through Younique is by far the best part. With NetSteps, the success came largely because of hard work. With Younique, the reasons we’re succeeding are so much bigger than myself. When you have the right mission and cause, good things happen.

Free Swap: Give away, find, connect with community Next post