“What if?” The phrase breaks the hearts of fans everywhere. “What if the quarterback hadn’t overthrown that one deep ball?” “What if we’d stopped them on third-and-8?”

Here are the five Cougar “do overs” we’d like to see. (Warning! This may not be healthy.) 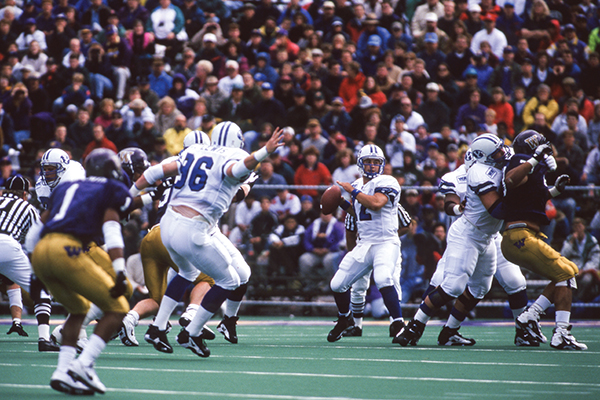 BYU started the season 2-0, highlighted by a massive season opening win over No. 13 Texas A&M. The national media was taking notice of the Cougars and quarterback Steve Sarkisian. But the Cougars got down 14-0 in the first quarter and weren’t able to overcome the deficit.

At the time, Washington was a good program and Husky Stadium continues to be one of the hardest places to win in the country. However, the obvious twist-the-knife-in-extra pain of the loss comes from what the Cougars did the rest of the year. They rattled off 12 consecutive wins — narrowly missing an Alliance Bowl invitation — before beating Kansas State 19-15 in the Cotton Bowl and finishing the season ranked No. 5 in the country. 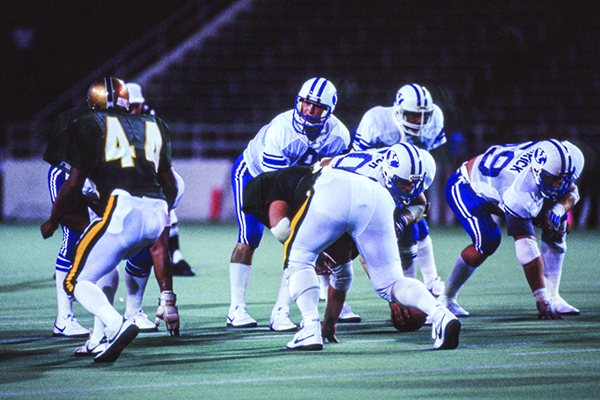 Led by senior quarterback Steve Young, the Cougars started what was supposed to be (and was) a promising season on the road against Baylor. The Bears jumped out to an early lead, then the game switched leads six times including four in the fourth quarter, with a 2-yard touchdown run by Alfred Anderson giving Baylor the final lead. Young had 351 yards passing and 143 yards rushing in the loss.

In a year that saw Jim McMahon defeat SMU on a last-second Hail Mary in the Holiday Bowl, that saw BYU whip Wisconsin 28-3 at Camp Randall and that saw the Cougars defeat rivals Wyoming, Utah State and Utah by a combined score of 178-69 — BYU started the season with a 25-21 loss. To New Mexico!

Before you look it up, New Mexico was bad then, too. The Lobos finished the season 4-7. Perhaps the only consolation was that only 16,840 fans were in attendance that day to witness it.

Again, BYU went undefeated the rest of the way and finished the season ranked No. 12. Woulda coulda. 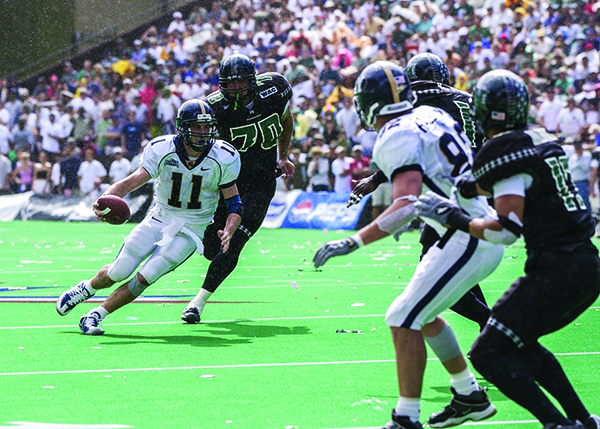 (Photo by Mark A. Philbrick)

With Doak Walker Award winner Luke Staley at running back, Brandon Doman at quarterback, current BYU running backs coach Reno Mahe at receiver and a good, athletic defense, the Cougars spent most of the second half of the season in the Top 10.

However, the week before the Hawaii game, Staley broke his leg on the game-winning drive on the road against SEC-opponent Mississippi State. While the Cougars got the win, Staley had to accept his Doak Walker Award on crutches and was out for the year.

With Staley out, and with the Cougars special teams having a meltdown, Hawaii took advantage. The Warriors jumped out to an early lead behind two kick returns for touchdowns. Then, Doman left the game with hurt ribs and the snowball continued. The Cougars misadventure led to a 72-45 loss — still the most points scored by a BYU opponent in any game. 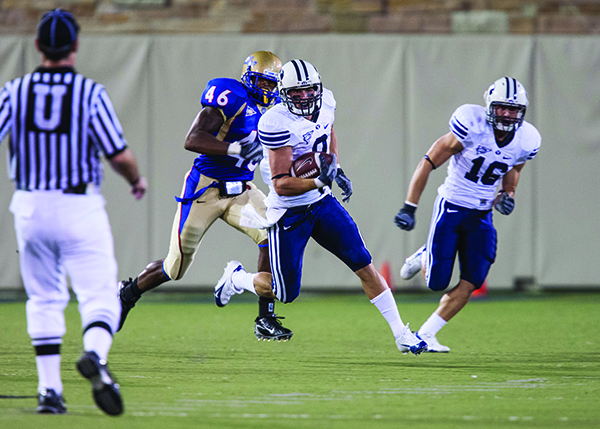 (Photo by Mark A. Philbrick)

The 2007 edition of the BYU Cougars featured arguably the best receiver (Austin Collie) best running back (Harvey Unga) and best ight end (Dennis Pitta) to ever play for BYU. Led by sophomore quarterback Max Hall, the Cougars finished the season 11-2 and ranked No. 14.

But, the season was painfully derailed before it even got going. After an impressive home win over Pac-10 foe Arizona, the Cougars lost at UCLA 27-17. A road loss against a Pac-10 school can be overlooked, but a road loss to Tulsa was a different story.

BYU and Tulsa both had potent offenses, but this day, the back-and-forth scoring finished with a Golden Hurricanes victory — and a good BYU team being relegated to the back of the 2007 class before charging down the stretch and winning 10 in a row, topped off with a 17-16 Las Vegas Bowl win over the very same UCLA team that beat them by 10.

Free Swap: Give away, find, connect with community Previous post