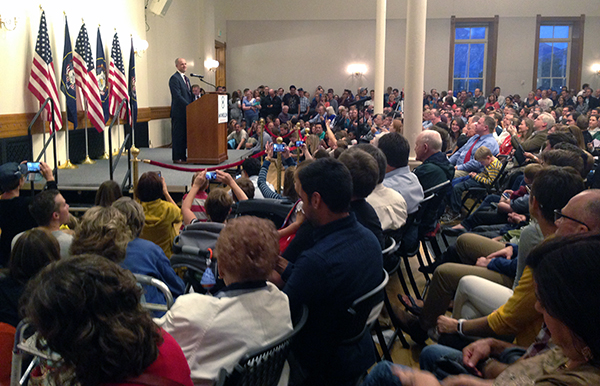 Presidential candidate Evan McMullin speaks to a crowd at the Provo City Library on Wednesday, Oct. 5, 2016. (Photo by UV360)

Presidential candidate Evan McMullin called for a “new conservative movement” and a return to the United States’ foundational ideals and principles in a speech at a filled-to-the-brim Provo City Library on Wednesday evening.

“In just six or seven weeks, we have built a budding national movement that I believe is a new conservative movement in this country that I believe will give birth to a new generation of American leadership,” McMullin said.

McMullin — who was born in Provo, Utah, raised in Washington and than returned to Provo to attend Brigham Young University — explained to the crowd how he had searched for months in Washington D.C. for a conservative candidate who would run as an independent, but he was disappointed that no one was willing to stand up to Republican presidential nominee Donald Trump and Democratic presidential nominee Hillary Clinton.

“We’ve lowered our standards for our leaders and as a result we’ve gotten worse leaders.” —Evan McMullin, presidential candidate

“We’ve lowered our standards for our leaders and as a result we’ve gotten worse leaders,” McMullin said. “Most importantly, we’ve abandoned in many ways our core ideals that have made us strong, our ideals on which this nation was founded. So I think we need to make some changes. I believe our nation has tremendous, unlimited potential. And I believe we can overcome these challenges.”

McMullin laid out his plan for overcoming the challenges of returning to American ideals by unveiling his document, “Principles For New American Leadership.” The document includes 13 principles such as honoring the constitution, separating and balancing government power, honest and wise government leaders, fiscally responsible leaders, helping people in poverty and more.

“I believe that a truly conservative movement recommits itself to the cause of liberty,” McMullin said. “What’s the cause of liberty? It’s our ability, it’s our right to pursue things. Think about that — our Founding Fathers established in this country so we could pursue happiness.”

He invited people to discuss these principles online using the hashtag #LetsTalkPrinciples.

“I believe that a truly conservative movement recommits itself to the cause of liberty.” —Evan McMullin, presidential candidate

These type of principles are what McMullin says has earned the U.S. good will amongst other countries. As a CIA operations officer for nearly a decade and as the senior advisor of the House Committee on Foreign Affairs and later the chief policy director of the House Republican Conference, McMullin said he had worked with multiple countries that respect America. But he warned that under the wrong leadership that good will would be lost.

McMullin emphasized at the end of his speech that it is the people, the citizens of the United States of America, that will be the difference and the change that the government needs.

McMullin will appear on the ballot for Utah, but will not be on ballots for all 50 states.