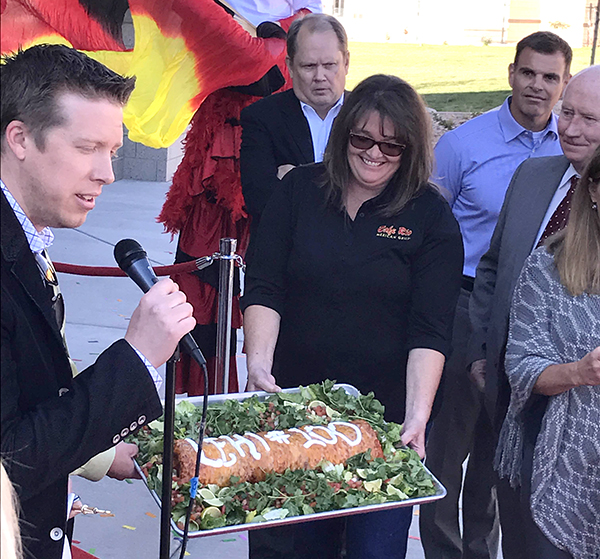 Cafe Rio celebrated its 100th restaurant opening with a large burrito with Lehi and 100 written on it. (Photo by Shannon Kelley/UV360)

Cafe Rio, which prides itself on everything being served fresh, opened its first restaurant in St. George in 1997. By 2004, the restaurant had expanded to four restaurants, but a new owner decided to push the restaurant further. Now, there are 100 Cafe Rio restaurants in 11 different states. 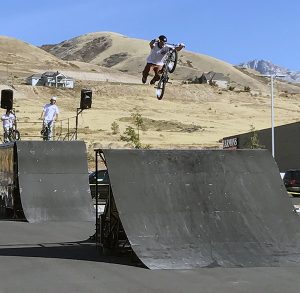 Utah Gov. Gary Herbert shared his first experience at Cafe Rio during his speech at the ribbon cutting. In 1999, Herbert was traveling with his family through St. George where they stopped for lunch.

“We stopped at this new Mexican restaurant called Cafe Rio,” Herbert said. “Little did we know at the time what was going to happen today as we celebrate the 100th store opening of Cafe Rio and it’s just a remarkable milestone in restaurant history, certainly in Utah.”

Herbert expressed how great of a feat Cafe Rio has accomplished. He said 50 percent of restaurants close within the first five years of business and only one-third of restaurants survive the first 10 years.

Cafe Rio announced they are now partnering with the Utah Food Bank in an effort to give back to the community. They presented Jim Yorgason, president and CEO of Utah Food Bank, a check for $2,500.

Orem ranked No. 2 best city for trick-or-treating in 2016 Previous post