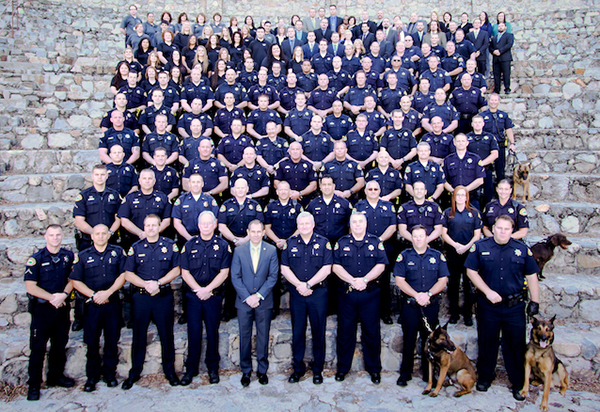 Provo Mayor John Curtis posted this picture of him with the Provo Police Department on his blog.

The police department has been working on a policy for the body cameras, and getting feedback from citizens groups, officers, and the ACLU, said Provo police Lt. Brian Wolken. “We want buy-in from the public to make sure we have a very good policy. Everything received so far has been very positive.”

According to the draft policy, officers should activate the cameras whenever they believe it’s appropriate or valuable. That includes during traffic stops, all enforcement and investigative contacts, activities when an officer would normally notify dispatch, or whenever a situation becomes adversarial.

The new cameras will do pre-event recording. So when an officer activates the camera, it will already have recorded 30 seconds, Wolken said.

“I think the biggest thing is when people know they’re on camera, everyone behaves better.” —Provo police Lt. Brian Wolken

“I think the biggest thing is when people know they’re on camera, everyone behaves better,” he said.

Studies have shown that when cameras are used, there’s a reduction in use of force and complaints decrease, he said. Officers likely will spend less time in court because it will be easier to prosecute people using video footage. In addition, the department can use the videos for training.

The department will keep video recordings for no less than 90 days, and at least three years if the footage includes use of force, a felony-level arrest, or if a person in the footage has submitted a complaint, according to the policy. The policy also designates time periods for keeping the footage if requested.

The $205,281 will come from the general fund balance. The cost covers the cameras, personnel associated with the system and data storage for the rest of this fiscal year.