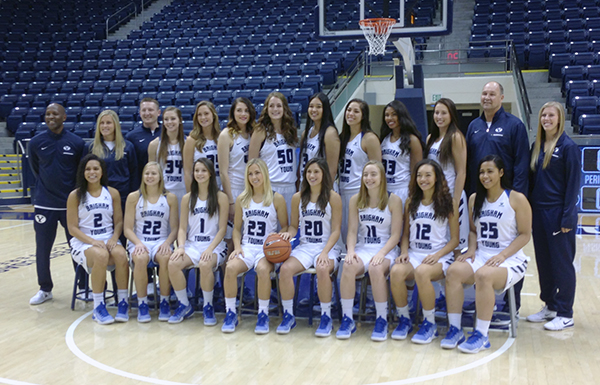 The BYU women’s basketball team is going to morph from game to game a lot this season — emphasis on team.

In the past, the Cougars have played off of a pivotal player, such as prolific scorers Lexi Rydalch and Morgan Bailey, but the 2016–17 season is going to look different, according to BYU senior Makenzi Pulsipher.

“I don’t think we will be a team that relies on one person like maybe in the past,” Pulsipher said. “I think this year we have weapons in every area, so we won’t need to rely on one person, which will be great because defensively teams can’t shut you down as easily. If they want to stop the drive, we’ve got shooters. If they want to stop the shooters, we’ve got inside presence.”

And the Cougars won’t need to rely on one player as BYU head coach Judd Judkins has a variety of lineups in the mix. This year’s team is taller; Pulsipher even joked about now being the shortest person on the team at 5-foot-8.

“I don’t think we will be a team that relies on one person like maybe in the past. I think this year we have weapons in every area.” —Makenzie Pulsipher, BYU senior guard

Judkins has multiple tricks up with his sleeve despite his teams youth — nine roster players are underclassmen — which he attributes to the vast improvement of multiple returning players on the team. Namely, Judkin says junior Cassie Broadhead will take over as the starting point guard, senior Kristine Nielson will start as a guard and sophomore MaCayla Hanks is going to be a “good surprise” this season. Then he expects Pulsipher to be ready as the go-to shooter. 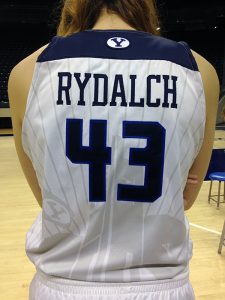 BYU sophomore Haley Rydalch shows off the Cougars new jerseys. In gray at the bottom, the design includes a stretch Y flag, the bell tower and Y Mountain. (Photo by Rebecca Lane)

He expects all of these players to help make up for the losses of Rydalch, who is the West Coast Conference’s all-time leading scorer, and Kylie Maeda, the starting point guard. Both graduated at the end of the 2016–17 season.

“When you lose Kylie and Lexi, two players who were great players here, somebody’s got to step it up,” Judkins said. “It’s not one person — it’s all of them.”

Part of having an arsenal of skilled squads with different strengths is the bigger and stronger presence in the post, which Judkins is using to pull senior Kalani Purcell out to the three position.

“You’re going to see her playing a lot more three than she played last year,” Judkins said. “Last year, she was really strictly a four because (Rydalch) was the three for us, but she’s going to play a lot of three this year. … She’s so good with the ball that it doesn’t really affect her game. Then defensively we’re just bigger and stronger at rebounding, so I think you’ll see her a little bit different. We’ll try to get her to score more. We’ll try to get her a little more offensively minded.”

“When you lose Kylie (Maeda) and Lexi (Rydalch), two players who were great players here, somebody’s got to step it up. It’s not one person — it’s all of them.” —Judd Judkins, BYU women’s basketball coach

Purcell, who played the three in New Zealand, welcomes the change.

During the 2015–16 season, the Cougars had an overall record of 26–7, took second in the WCC Tournament and made it to the first round of the NCAA Tournament.