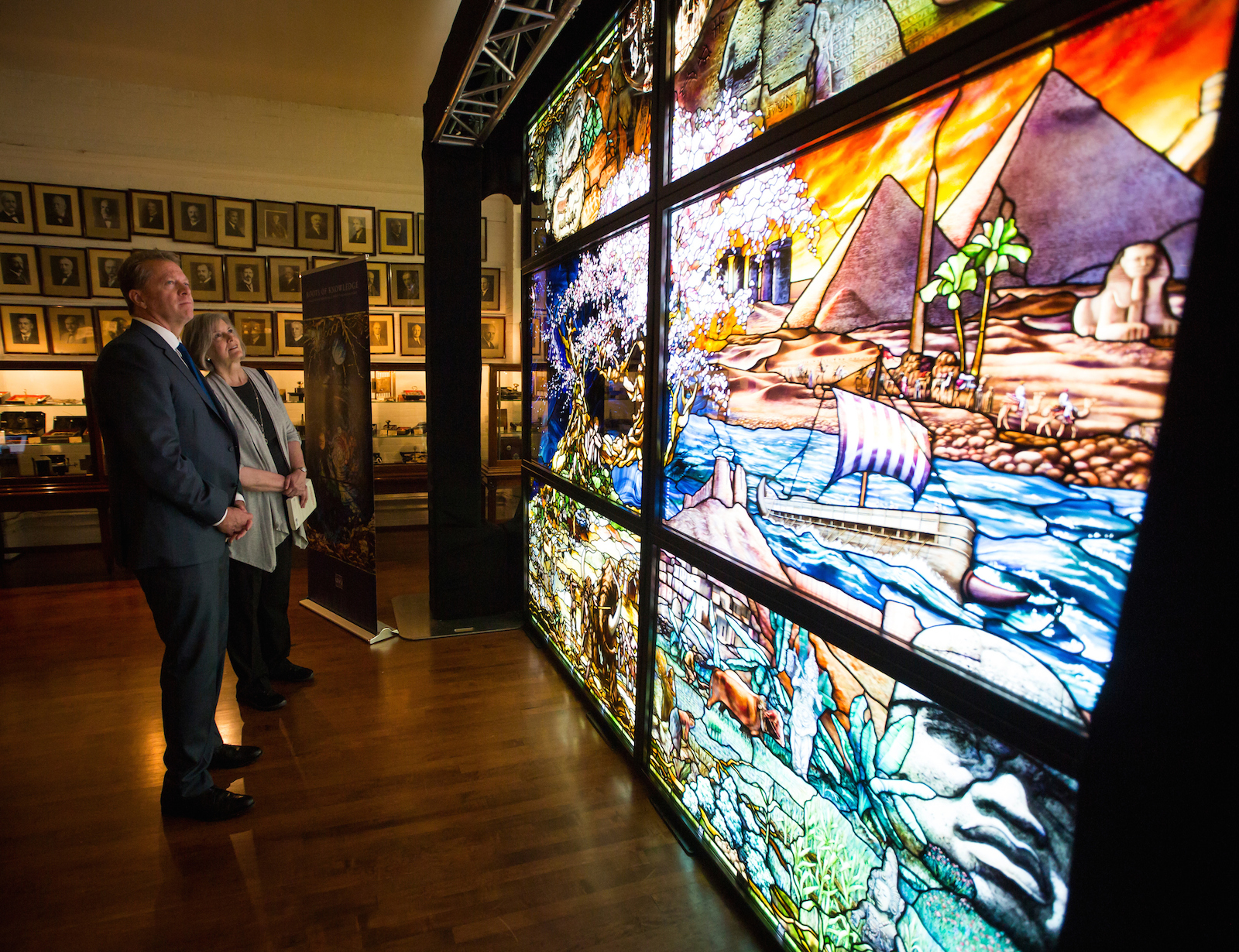 Lecture attendees examine panels from “Roots of Knowledge,” a stained glass exhibit headed for a permanent home at UVU Library, while on display in Manhattan this week. (Photo courtesy of UVU Marketing)

Depicting the entire scope of human knowledge in stained glass may sound like an impossible feat, but a small army of Utah Valley artisans and academics tackled the task and captured the attention of New York City artists this week.

Utah Valley University President Matt Holland, glass artist Tom Holdman of Holdman Studios and UVU professor Kate McPherson were invited to kick off the Fall 2016 Artisan Lecture Series at The General Society of Mechanics and Tradesmen of the City of New York, located in midtown Manhattan, on Monday.

In “Illuminating Knowledge: Creating a Major Stained Glass Installation at Utah Valley University,” Holland and Holdman presented the conception and execution of “Roots of Knowledge,” an 80-panel work for the UVU Library, to a crowd of more than 120 attendees. Six panels from“Roots of Knowledge” were also on display Oct. 12–18 on the General Society balcony.

The audience seemed to catch the vision Holland and Holdman laid out for the work, with attendees enthusiastically engaged in the presentation and peppering them with questions afterward — including where exactly Orem, Utah, is.

“New York is such a gathering place of so many things, and it is many ways the stained glass capital of the country, if not the world.” —UVU President Matt Holland

“New York is such a gathering place of so many things, and it is many ways the stained glass capital of the country, if not the world,” Holland said. “The reception we’ve had has been overwhelming, so I just couldn’t be more thrilled with how this event has gone.” 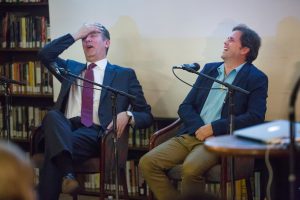 The roots for “Roots of Knowledge” were laid 12 years ago, when Holdman first had the idea for a work showing the evolution of knowledge.

Holland commissioned the piece and expanded its scope, Holdman said. The two collaborated for years, along with more than 400 academics, students and artisans. The finished 10-foot-tall, 200-foot-long masterpiece will take a front-and-center position in UVUs’s library, with the grand unveiling Nov. 18 as the culminating event of the university’s 75th anniversary celebration.

“The power of the story, I think, is in the partnership,” Holland said. “We obviously couldn’t do this on our own, Tom (Holdman) couldn’t have done this on his own, but together I think we’ve been able to do something extraordinary.”

“Roots of Knowledge” tells the story of knowledge for all mankind, encompassing all civilizations and cultures from prehistory to the future.

The work is meant to inspire viewers to contemplate where they fit into the development of knowledge and what they can contribute to the growth, Holdman said.

“It would be a shame if someone saw it and thought ‘Oh, that’s beautiful’ and not alter their path for the betterment of humankind,” he said.

“We hope that people will think about ‘Where do I fit in?’ and ‘What is my piece?’” added his wife, Gayle Holdman. “Do what you’re passionate about, and that will be your greatest contribution.” 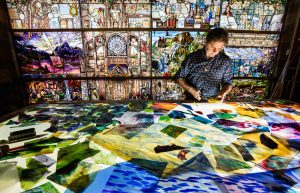 Tom Holman poses for a portrait with “Roots of Knowledge” panels in July. Holdman and six panels of the work traveled to Manhattan in October. (Photo courtesy of UVU Marketing)

With so much ground to cover, every single detail in the piece is deliberate, from the types of flowers to the selection of cultural icons. Among the serious symbols are a smattering of Easter eggs — such as the Millennium Falcon and U.S.S. Enterprise cruising among the stars, or a Charlton Heston-esque Moses leading the Israelites out of Egypt. Faces from the creative team dot the School of Athens, and Holdman even makes a cameo as wicked King John (complete with an Errol Flynn-style Robin Hood taking an assassin’s aim with his bow and arrow).

Roots of Knowledge: By the Numbers

Pop culture references aren’t the only hidden gems within the work. Holdman incorporated materials such as amber fossils, fire agate, fossilized mammoth ivory, a flint spearhead and deer antler in the prehistoric panel alone. The materials integrate seamlessly within the thousands of panels of stained glass, bringing added dimension.

The panels are a combination of glasswork techniques, including traditional mosaics, subtraction (in which the desired visual is created by removing layers of paint) and painting with glass dust that’s later fired into the panes to create an image that won’t fade with time.

Even in its creation process, “Roots of Knowledge” embodies UVU’s focus on engaged learning. More than 350 students contributed to the work, from cutting glass and doing graphic design as interns with Holdman Studios to writing encyclopedia-style entries on vignettes within the glass for future use in materials to help visitors and students more fully understand every visual element in the wall, including an interactive app.

Karin Taylor, program director for The General Society of Mechanics and Tradesmen of the City of New York, said her institution was honored to be home to the panels for the week. 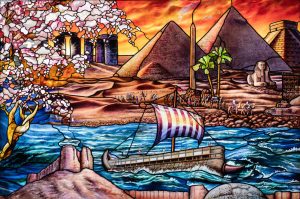 Panel D-2, which includes depictions of Stonehenge, a camel caravan, the Pyramids of Giza and a Phoenician ship, was among the “Roots of Knowledge” panels to travel to New York City for display in October. (Photo courtesy of UVU Marketing)

“This is the epiphany of engaged learning,” a passion shared by both organizations, Taylor said. “The color, the detail, the thought that has gone into it, the fact that there is so much going on — you could look at this endlessly and keep discovering new things. … I can say that we have never had anything as original and as beautiful as this as an exhibit, so we feel so fortunate.”

New York City isn’t the only stop on the“Roots of Knowledge” pre-installation tour — Holdman, Holland and others will travel to London in coming weeks to showcase the work at Oxford University and other locations before its public unveiling in Orem next month.