Home Moms & Family 7 tips for talking politics with your kids

7 tips for talking politics with your kids 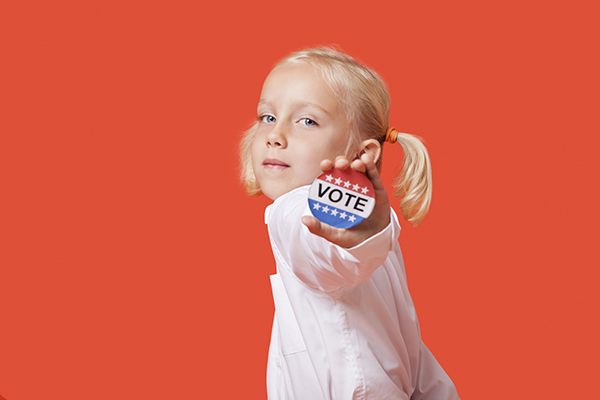 My 9 year-old came home from school a few months ago and ask me earnestly: “Is Donald Trump going to ruin my future?” Caught off guard, I bumbled some neutral, placating answer like, “Oh, no, life will go on, we’ll talk about it later” and drove back into my after-school multitasking of entertaining a preschooler, prepping dinner and supervising piano practice.

We never properly revisited the topic, despite his semi-frequent political queries, mostly because I felt unprepared to answer his questions, and frankly, a little stressed out by the election in general. I’m not alone. More than half of U.S. adults feel very or somewhat stressed by the upcoming election, according to the American Psychological Association.

Stressed or not, the head-in-the-sand approach is never a good parenting strategy. Read on for seven suggestions on how to talk to kids about the election — using phrases you won’t mind them repeating at school.

Kids hear mixed messages on TV and at school, so Utah Valley University political science professor Luke Peterson recommends making sure your kids are solid on political fundamentals. Why do we vote? Why do people care so much about a particular candidate or feel so strongly against another?

“You don’t need to go into a lot of details, but it’s important for them to understand that people are passionate about the election because it means so much about the future of our country and also that it’s the past of our country,” says Peterson, also director of the Office of New Urban Mechanics. “Elections should be important because they are the foundation of our democracy and our nation and its renewal.

2. Teach them that there are two sides to every issue.

Not many people have identical political views so it’s helpful to teach kids that opinions and ideas are good things. “That’s part of what democracy is about,” Peterson says. “We may have our reasons for liking a particular candidate and other people feel strongly about a different candidate.”

Peterson talks to his kids about both the negatives and positives of each candidate and each party and discusses which stances align with their family’s values. “There are very few people who are 100 percent aligned with the Democratic platform or the Republican platform. We may say, ‘On the whole, I think this person, this candidate or this party lines up with these things I think are important; but I can understand why someone might think differently,'” he suggests.

“If we can help our kids learn to listen to other people’s opinions and hear what they are saying and appreciate it even if they disagree with it, I think that’s a really good thing for the future of our democracy.” —Luke Peterson, UVU political science professor

Try to avoid name calling and resorting to do-or-die scenarios, and keep discussions polite. “Part of why this election has been seen as terrible by so many people is that we’ve stopped being civil,” he says. “If we can help our kids learn to listen to other people’s opinions and hear what they are saying and appreciate it even if they disagree with it, I think that’s a really good thing for the future of our democracy.”

5. Remind them that life will go on.

Elections happen all the time, and the outcome isn’t always what we want but life goes on. Peterson comes from a politically active family and keenly remembers the 1988 election when he was 8 years old. “The candidate my parents’ supported lost in that election and then I thought, ‘Oh no, something terrible is going to happen as a result of this,'” he says. For a kid who is really becoming aware of elections for the first time it may seem like life or death. “It’s important for them to know that we’ve been doing this for a long time and things will carry on.”

6. Focus on the importance of  closer-to-home elections.

Peterson says we put way too much emphasis on the presidential election and should be focusing on other offices up for election this year that affect us more directly, like who is running for governor and state legislature. Next year’s city’s elections have even more of a direct impact. “Emphasize the importance of voting and of elections, rather than on this candidate or that candidate,” Peterson says. Teach your kids the names of government leaders in the area. “Being an engaged citizen is a really good message to get across.”

7. Don’t shy away from the conversation.

If your child hasn’t already brought the topic up — and you think they’re old enough to be clued in —Peterson recommends instigating an honest conversation about what’s going on. Having ongoing conversations about political matters will likely help them grow into adults who can respectfully express their views.

“It’s important for kids to be able to articulate, to express their opinions in a way that is reasoned and that can appreciate other viewpoints,” he says.

Peterson often sees freshman in introductory political science courses who are completely thrown off their axis when they encounter people who hold political views opposite their own. “They’ve only ever held the one viewpoint; it’s been repeated over and over again and they’ve never had to defend it,” Peterson. “They don’t know how to talk about issues in a civil way, and that just contributes to the problem.”

Gardner Quad Squad reunite with doctor who delivered them Next post