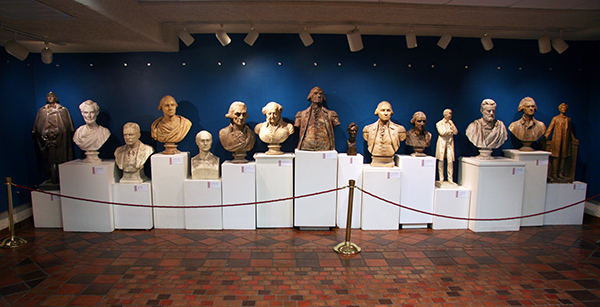 The election doesn’t end on Nov. 8th for the Springville Museum of Art.

Taking a look at the past, the museum prepares for the future with an educational presidential exhibit named “Rock the Vote.” The display, which opened on Sept. 7, will be open through Jan. 7, 2017.

“We wanted to have something really fun to get people excited about voting and about America,” said Emily Boothe, assistant curator and collections manager at SMOFA. 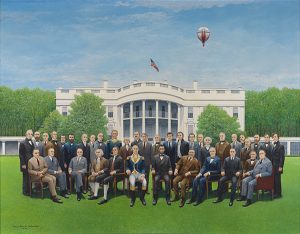 Ralph Hewett Schofield’s painting, “A Meeting of the American Presidents,” is an acrylic on canvas painting from 1978 that is part of the “Rock the Vote” display. (Image courtesy Springville Museum of Art)

The display is broken down into three areas in the lower level of the museum: historical images, campaigning tactics of different candidates and satire that pokes fun at past candidates. This is accomplished with 100 different campaign buttons, a media wall representing past presidential elections, sculpted busts of past presidents and paintings — some by local artists — and other artifacts.

“My circle of acquaintances is really wrapped up in this election,” Boothe said. “We really wanted to look back at who has been our past presidents and how they were portrayed. Hopefully, this will help people looking at voting right now.”

“The whole feel of the exhibition is to be fun and lighthearted,” Boothe said.

Learn more about “Rock the Vote: Presidential Portrayals Past and Present” at smofa.org.