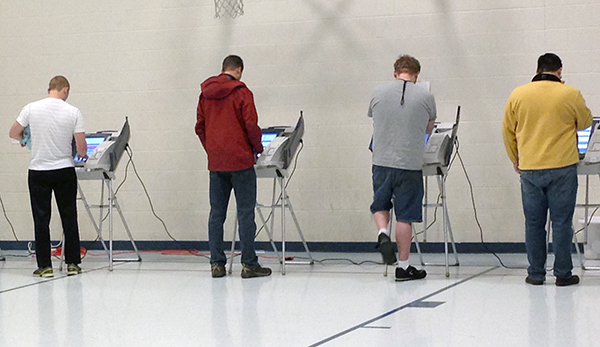 Utah was a red state, then maybe a swing state, then quickly again a red state. Not long after polls closed in the state on Tuesday night, Donald Trump was declared the winner of the state’s six electoral votes.

Though the presidential election was on everyone’s mind, Utah — and Utah County — had plenty of other races on the ballot. There were tax propositions, bonds, constitutional amendments, school board, state and federal races.

Now that the bond is approved, Alpine Superintendent Sam Jarman says the district is ready to get to work. “We are anxious to begin breaking ground on a new high school in Eagle Mountain along with other projects that are desperately needed.”

In a joint statement, the Alpine School Board thanked voters. “We are grateful for the trust and support shown by so many citizens with this bond election. This speaks to the value we place on education which is one of our greatest rights and privileges to ensure our children’s future. Our stewardship of this bond will continue to be held in the greatest of care and focused on the need to provide a safe and quality education for all students across the district.”

Read on for Utah County specific results of the 2016 election.

The city asked voters to impose a .1 percent sales and use tax to fund botanical, cultural, and recreational organizations or facilities in the city.
Against = 51.2 percent
For  = 48.8 percent

Lehi asked voters to approve a $50 million bond to pay for parks, park improvements and related facilities.
Against = 60.7 percent
For = 39.3 percent

The city asked resident to enact a local sales and use tax of 1/10 of 1 percent to fund recreational amenities and cultural arts facilities and organizations in Payson
City. Funding may be used to support non-profit organizations providing programs.
Funding may be used for capital improvements of publically owned or operated amenities such as parks and trails, museums and a performing arts center.
For = 61.92 percent
Against = 38.08 percent

Shall the Utah Constitution be amended to make a technical wording change in the oath of office that elected and appointed officers are required to take?
For = 64 .58 percent
Against = 35.42 percent

Shall the Utah Constitution be amended to allow a property tax exemption for tangible personal property that is leased by the state or by a county, city, town, school district, or other political subdivision of the state?
Against = 57.41 percent
For = 42.58 percent