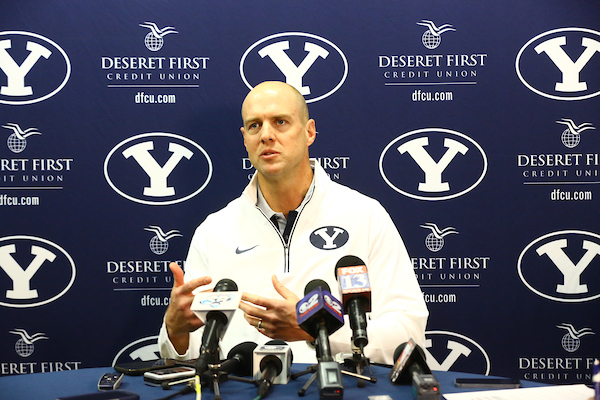 Getting BYU on the football schedule became a major goal for Ed Lamb during his time as a head coach at Southern Utah. The Thunderbirds searched tirelessly to find a date that worked for both schools before finally locking in a game a year ago.

Lamb never imagined he would participate in Saturday’s game on the opposite sideline from where he started out as a head coach.

“It was a game that we asked for and requested for six or seven years and we finally got BYU to look at a date that was mutually available and we scheduled it,” Lamb said. “It was something I was very excited about then. I’m less excited about it now.”

Playing Southern Utah feels like going home again for Lamb and several other BYU football coaches. The Big Sky school turned into a coaching pipeline when Kalani Sitake filled out his staff heading into his debut season as head coach.

“It was a game that we asked for and requested for six or seven years and we finally got BYU to look at a date that was mutually available and we scheduled it. It was something I was very excited about then. I’m less excited about it now.” —Ed Lamb, BYU football assistant head coach

Lamb joined BYU as assistant head coach after rebuilding a downtrodden SUU program he inherited into a championship team. The T-Birds were mired in a 19-game losing streak when he took over as head coach. Lamb quickly reversed their fortunes.

Under Lamb’s watch, the T-Birds reached the FCS playoffs for the first time in school history in 2013. In Lamb’s final year in Cedar City, Southern Utah claimed its first Big Sky Championship. Both years, the T-Birds ranked No. 1 in the Big Sky in scoring defense.

Building a winning program at SUU taught him some valuable lessons on how to grow and maintain a winning culture at BYU.

“I was learning new things and trying new things and so it just shaped a lot of my philosophies,” Lamb said. “As we come through the business, we have all these ideas about how we’ll do it when we’re a head coach. It turns out when you start doing it, all those ways that you thought we’re going to be really good — all of those ideas aren’t as good as maybe you hoped. That’s where it shaped me in terms of how I think as a head coach and also my definition of what a good, loyal, trustworthy assistant would be.”

“As we come through the business, we have all these ideas about how we’ll do it when we’re a head coach. It turns out when you start doing it, all those ways that you thought we’re going to be really good — all of those ideas aren’t as good as maybe you hoped.” —Ed Lamb, BYU football assistant head coach

Lamb’s former assistants, Steve Clark and Jernaro Gilford, also joined him in Provo. Gilford took over as the cornerbacks coach. Clark became the tight ends coach after serving as an offensive coordinator both at SUU and Weber State.

The Southern Utah coaching pipeline also notably includes Sitake himself. He spent two seasons as an offensive assistant with the T-Birds from 2003 to 2004, coaching tight ends both years and running backs his first season before switching to the offensive line the next year. BYU defensive coordinator Ilaisa Tuiaki played for SUU as a running back in 1995 and 1996.

For Gilford, his time at Southern Utah played a valuable role in shaping what he does as a coach at BYU. He observed how the coaching staff molded players from the training room to the practice field and still maintains close relationships with current SUU head coach Demario Warren and other staff members he worked with during his two seasons in Cedar City.

Ironically, a couple of SUU players joined BYU as transfers at the same time their former coaches came to Provo. Andrew Eide and Keyan Norman both played on the Thunderbirds’ offensive line and are key contributors up front for their new team as well.

Eide said having Coach Lamb and other former T-Birds coaches around helped ease his transition. Growing up in Orem made him familiar with the Cougars and his father also works as a professor at BYU. But the presence of some coaches he knew and trusted definitely created extra security while he made the jump from FCS to FBS football.

“Coach Lamb is one of my greatest mentors,” Eide said. “The team here immediately took me under their wing and fellowshipped me, so there wasn’t very many feelings with feeling out of place in the beginning. It felt pretty natural for the most part. And I think Coach Lamb being up here was a huge part of that.”

This intricate web of personal connections for players and coaches alike gives Saturday’s game against SUU a deeper meaning for BYU. For them, this will not be just a run-of-the-mill guarantee game against an FCS opponent.

Double Purple Heart Marine vet talks about holding his dying friend, being captured by the enemy and living with PTSD Next post