Home LDS Being LDS Double Purple Heart Marine vet talks about holding his dying friend, being captured by the enemy and living with PTSD 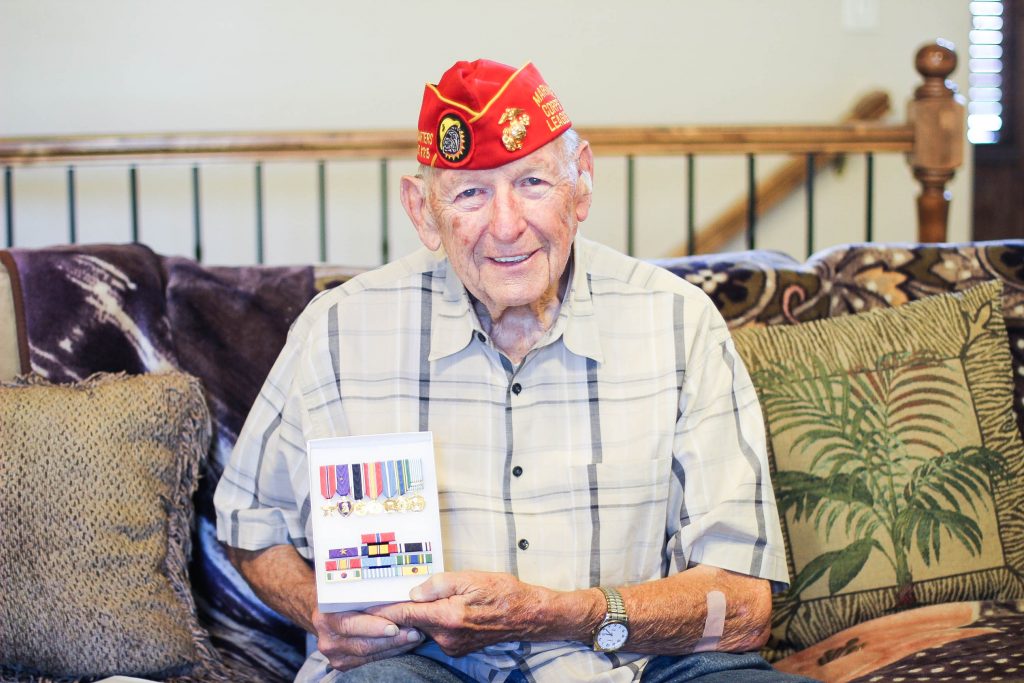 The Korean War may not be discussed much in schools, but it’s not something Marine Corps veteran William Baucom of Pleasant Grove, Utah will soon forget.

William “Bill” Baucom, now 87 years old, was starting college as a freshman quarterback for Fresno State College when he was called to active duty in July of 1950.

“America had just gotten over a war in 1945, and they weren’t really prepared for another war,” Baucom said. “We wanted peace.”

But Baucom’s service in Korea would be anything but peaceful. One of his first assignments was to shoot as a machine gunner. After a round of shooting, he had to go stack the dead out of the way.

“Heck, I was just out of high school,” Baucom said. “I’d never even been to a funeral. And here I am in a position where I’m killing people and stacking them up. It was very traumatic.”

“I’d never even been to a funeral. And here I am in a position where I’m killing people and stacking them up. It was very traumatic.” —William “Bill” Baucom, Korean War Veteran

Baucom was also part of the famous Battle of Chosin Reservoir, where 30,000 United Nations troops fought against 120,000 Chinese troops for 14 days in 30-below weather.

One day, Baucom and his company were told the colonel needed some marines who were a straight shot. Baucom, who thought riding in the jeep and getting some warm food sounded nice, decided to try his hand at it. Baucom and his friend, who’d later become his spotter, beat out about 200 other men vying for sniper positions. 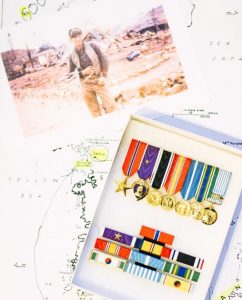 Bill Baucom’s military decorations from the Korean War rest on a shelf in his Pleasant Grove living room.

During one of his sniper missions, Baucom and his spotter were shooting at a line of Chinese soldiers on a distant hill. The spotter turned to Baucom and said, “Don’t look now, but we’ve got company.” They were surrounded by five Chinese soldiers. The lieutenant ordered them to shoot Baucom and his friend, but one of the officers spotted the detailed map that Baucom was carrying.

The officer wanted Baucom to interpret the map, and beat him when he couldn’t communicate with him. Then, the officer folded the map, took Baucom and his spotter’s rifles away and marched them to the outskirts of a Chinese POW camp where they were kept (and beaten) for a few nights.

“We knew they’d kill us after they talked to us, so we had to figure out a way to escape,” Baucom said. Baucom and his spotter started saying things to the Chinese who were guarding them to see if they responded. Once they confirmed the guards couldn’t understand English, they made a plan to jump the guards if one of them got distracted in any way. The opportunity came when one of the officers tripped on some gravel. Baucom and his spotter killed the guards, then ran for two days until they reached friendly territory. 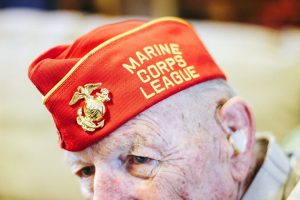 Bill Baucom shares his story in hopes of educating others and helping other war veterans through PTSD.

Baucom was awarded two Purple Heart medals during his service, one after being shot and another after stepping on a land mine. But his uniform decorations aren’t the only things he brought back from his service. He brought back traumatic memories — memories of holding his sniper partner in his arms while he died. Memories of seeing dead civilian families in the street, or seeing killed American soldiers with their wrists tied behind their backs, photos of their families in their hands. Those are the memories that haunt Baucom at night.

“Whenever I give a talk, I can’t go home and everything’s fine,” Baucom said. “Because what I’ve been doing is opening the top of my head and putting all this stuff back in. Stuff I’ve been trying to get rid of. PTSD isn’t a crazy person running down the hall with their arms in the air. PTSD is waking up at four in the morning, sitting on the edge of your bed and crying for an hour . . . for the people you saw killed and the people you had to kill.”

“Whenever I give a talk, I can’t go home and everything’s fine. Because what I’ve been doing is opening the top of my head and putting all this stuff back in. … PTSD is waking up at four in the morning, sitting on the edge of your bed and crying for an hour . . . for the people you saw killed and the people you had to kill.” —William “Bill” Baucom, Korean War Veteran

Baucom makes the best of his struggle with Post Traumatic Stress Disorder by helping other PTSD patients at the Veterans hospital in Salt Lake.

“When I go to the VA hospital and they put me in with some of these guys who just got back from combat, I can talk to them. And they can talk to me. I’m happy to be able to act in that capacity.”

Although the memories are painful, Baucom hopes that sharing his story will help people learn to honor war veterans for the sacrifices they’ve made.

This story was recorded in partnership with The Listening Ear Project.

Weekend best bets: 5 entertaining activities for which you don't need to leave Utah Valley Next post