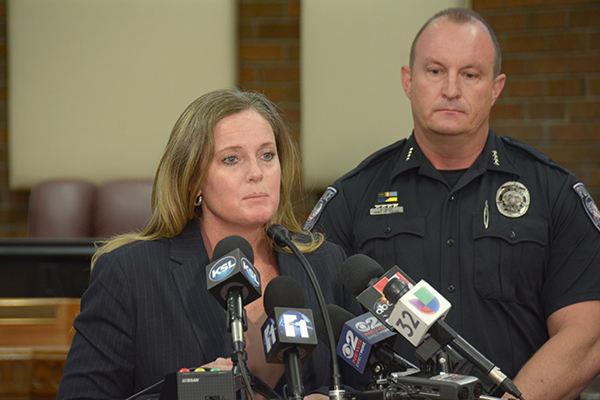 OREM, UT – At 7:47 a.m. Tuesday, a 16-year-old Mountain View High School student stabbed five of his fellow students as they were preparing for their P.E. class. Just six minutes later at 7:53 p.m., Orem police had the suspect in custody.

“When you think about that kind of response time, that’s amazing,” said Chief of Police Gary Giles with Orem Police Department in a press conference.

“He did have a knife, so those staff members did place themselves in harms way to keep that suspect from coming back out at the students,” Giles said.

“He did have a knife, so those staff members did place themselves in harms way to keep that suspect from coming back out at the students.” —Chief of Police Gary Giles, Orem Police Department

The school resource officer tased the student and took him into custody.

“At this time we don’t have a motive for the stabbings,” Giles said. “This is still under investigation. We still actually have officers at the high school. They’ll be there for most of the day. We also have officers in other locations investigating and trying to piece this all together.”

Five male students were injured with stab wounds to their necks and torso and range from critical to fair conditions. They are all receiving treatment at various hospitals in Utah County. At the 11 a.m. press conference, the Orem Police Department didn’t have an update on the condition of the victims, but said the families had opted for privacy. 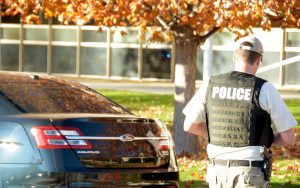 Police had the suspect in custody within six minutes of the police being notified. (Photo by Rebecca Lane/UV360)

The suspect also self-inflicted stab lacerations to his neck area, so he is receiving treatments at a local hospital. He was a Caucasian sophomore at MVHS, who had just started as a sophomore at the school after being homeschooled in the past, according to Alpine School District Spokesperson Kimberly Bird.

“As we look as a school district on things that we could do in these situations … I want to share with you that sometimes these things are things that are unseen. This is a new student at Mountain View High School, a new sophomore, straight-A student, attends regularly and no prior discipline issues, so these are very difficult things that the faculty and staff, administration and district will go back and debrief.”

Giles said there were a good amount of eye witnesses that they have talked to and will review their accounts.

“We isolated a lot of witnesses, got their names, got their stories and now we’re going to have to go back and sort through those and see what we think may have been a motive,” Giles said. “There’s a lot of different things we need to look at for a motive to the whole thing.”

“We also know that the school is a safe place for kids to be and that we have resources there for kids to use and utilize. Sometimes when they push kids home, we don’t know what’s home and available as a resource to them.” —Kimberly Bird, Alpine School District spokesperson

The school was placed under lockdown until roughly 9:30 a.m. MVHS decided to proceed with regularly scheduled classes, but closed the gym where the crime scene was located. Parents were able to check out students if they chose. Bird said “a good majority” of students decided to leave school for the remainder of the day.

“The answer for doing that is the scene was secured by the police department so quickly,” Bird said. “We also know that the school is a safe place for kids to be and that we have resources there for kids to use and utilize. Sometimes when they push kids home, we don’t know what’s home and available as a resource to them.”

Classes will resume as regularly scheduled on Wednesday.

“We’re extremely saddened and upset about this incident,” Bird said. “However, very grateful to have on hand a full-time resource officer at the school. Our partnership with Orem City is so critical to us and we’re so appreciative that we’re able to have that resource daily in our schools.”

Watch the full press conference below beginning at 8:18.

UPDATE: The Orem Police Department tweeted at 2:10 p.m. Tuesday that the suspect and one victim had been released from the hospital.

“At this point, none of the patients’ injuries are considered life threatening,” Utah Valley Hospital reported.