Home LDS Being LDS The blessings of welcoming home a missionary

The blessings of welcoming home a missionary 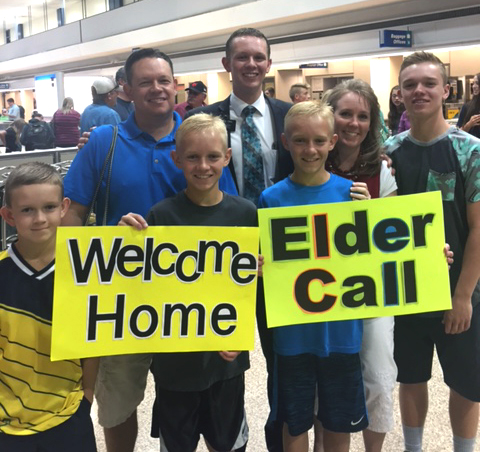 Jeff Call, top left, welcomes his oldest home from his LDS mission along with the rest of his family, except his second son who is currently serving a mission. (Photo courtesy Jeff Call)

No doubt, it’s difficult to say goodbye to your son or daughter when they leave on a mission. But when they come home after two years or 18 months, it’s even better than you can imagine. If you’ve experienced it, you know exactly what I’m talking about.

I know this firsthand because my oldest son returned home from his mission to Ecuador in July.

As I stood in the Salt Lake City Airport that night, I couldn’t help but think about that early morning two years earlier that we dropped him off and helped him make his flight to Mexico City, where he attended the Missionary Training Center there.

It was a heart-wrenching experience, to be sure. We were thrilled that he would be serving a mission but we knew he would be deeply missed. And he was.

My son survived an armed robbery, earthquakes, amoebas, stomach infections and an erupting volcano, among other things, during his time in the Ecuador Quito North Mission. At home, we prayed for him, worried about him, wrote him emails, and exercised our faith on his behalf.

Then, on the day he was to return home, we stood once again at the Salt Lake City Airport wondering if it this was really happening. It was surreal. It didn’t seem like that day would ever come.

When he emerged into the welcoming area near the baggage claim, my wife grabbed him first for a long embrace which, of course, I videotaped for posterity. And Facebook.

At that moment, watching that scene that I had imagined, and looked forward to, in my mind so many times, the feeling of ineffable joy made everything worth all the worry and all the time we spent missing him.

That was the payoff, along with the many payoffs along the way.

And then it got even better.

A couple days after my son returned home, I woke up and walked into the kitchen. I glanced into the living room and saw four of my sons, led by my returned missionary, sitting on the couch dressed in their Sunday best of white shirts and ties, reading scriptures together.

A couple days after my son returned home, I woke up and walked into the kitchen. I glanced into the living room and saw four of my sons, led by my returned missionary, sitting on the couch dressed in their Sunday best of white shirts and ties, reading scriptures together.

Yes, reading scriptures. I couldn’t have gotten my younger sons to do that with a court order.

But because they idolize my oldest son and admire him for serving an honorable mission, they willingly and happily did it.

After I picked myself up off the floor, I asked them what they were doing, one of them said, “After we read, we’re going to go to the temple.”

I immediately checked to see I had somehow missed the Second Coming.

For those first several days after my son got home, my other sons followed him around the house like puppy dogs and just stared in awe at him. They wanted to be just like him.

I realized my son was helping his siblings in ways we couldn’t as parents.

The blessings of having a son or daughter serving a mission can continue, even after they come home.

If you missed it: This weekend in BYU sports Next post