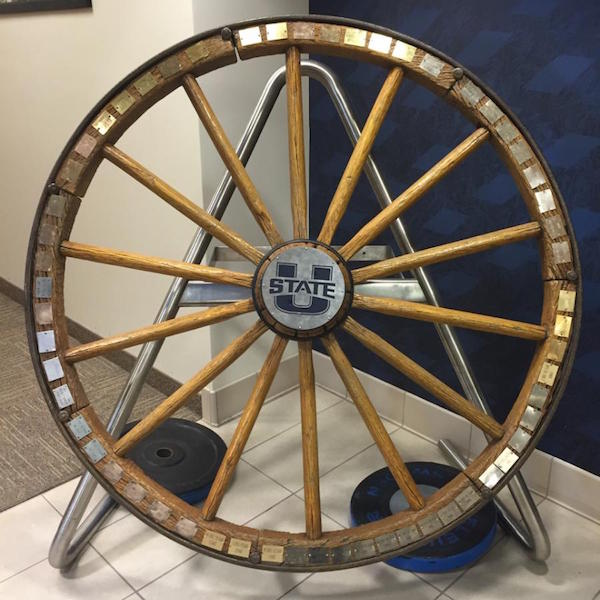 The Old Wagon Wheel serves as a trophy for the winning team between the BYU and Utah State football teams.

It seems fitting to see BYU face off against Utah State to close out the regular season for a second straight year. The Battle for the Old Wagon Wheel has experienced a resurgence in relevance behind a series of close contests and memorable finishes over the last few seasons.

BYU leads the series 47–35–3 and has gone 30–5 against the Aggies over the last four decades. Those numbers can be a bit deceiving though. Utah State has won twice in the last six years. Two other games have been decided by a three point margin. These tight contests have only ratcheted up the intensity.

“That’s made it more serious as they’ve become a more competitive opponent for us,” senior defensive lineman Sae Tautu said.

Utah State’s program experienced a revival under Gary Andersen and, aside from this season, has stayed competitive under his successor Matt Wells. The Aggies played in five straight bowl games from 2011 to 2015. It has added extra flavor to this rivalry between two schools who often compete for the same recruits.

“Every year I’ve played Utah State, it’s felt like a definite rivalry game. That’s what you’re going to get when you have two schools in the same state. … Every year, it’s going to get a little more intense and that’s how you hope for it to go.” —Mitchell Juergens, BYU senior receiver

“Every year I’ve played Utah State, it’s felt like a definite rivalry game,” senior receiver Mitchell Juergens said. “That’s what you’re going to get when you have two schools in the same state. There’s been history. We’re playing for the Wagon Wheel and that’s a big thing. Every year, it’s going to get a little more intense and that’s how you hope for it to go.”

BYU is seeking for its second straight victory over the Aggies. The Cougars roared to a 51–28 victory in Logan last season and are looking to notch their first victory in Provo over USU since 2012.

Where will Saturday’s game rank among other contests in the Battle for the Old Wagon Wheel? Here’s a look back at the five most dramatic victories for BYU:

Few games in this rivalry series changed the direction of the BYU program more profoundly than this one. Riley Nelson wrestled away the starting quarterback job from Jake Heaps for good after leading the Cougars to a dramatic fourth quarter comeback over the Aggies.

Nelson replaced Heaps during the third quarter with BYU trailing 21–13. He subsequently led the Cougars on a pair of touchdown drives. Nelson found Cody Hoffman for a 24-yard touchdown pass early in the fourth quarter, cutting the USU lead to 24–20. Then he led BYU on a 96-yard scoring drive over the final three minutes. Marcus Mathews hauled in a 13-yard touchdown pass off a tipped ball for the winning score with 11 seconds left.

Heaps eventually transferred to Kansas at season’s end after his demotion. Nelson remained the starting quarterback over the remainder of the 2011 season and the bulk of the 2012 season.

One of BYU’s most improbable comeback victories came at Utah State’s expense. The Cougars rallied from a 27-point halftime deficit to stun the Aggies in Logan during Gary Crowton’s second season in Provo.

When cornerback Jerome Dennis returned an interception 75 yards on the last play of the second quarter, giving Utah State a 34–7 halftime lead, it appeared that BYU would suffer its first loss in Logan in a decade. Everything changed when Curtis Brown brought the Cougar offense back from the dead in the third quarter.

Brown rushed for a pair of third-quarter touchdowns to cut the USU lead in half and finished with 217 yards and three scores on 33 carries. BYU chipped away at the lead and finally went ahead for good on Bret Engemann’s 18-yard touchdown pass to Gabriel Reid with 6:46 left in the fourth quarter.

Defense ruled the day for the Cougars. BYU won for the first time since 1946 while scoring six or fewer points and did it by holding the Aggies to just 243 total yards and a field goal. It also marked the first time both teams combined for fewer than 10 points since a 9–6 USU victory in 1974.

BYU’s lone score came in the final seconds of the first half. The Cougars drove 61 yards over four plays in just 25 seconds. Taysom Hill completed three straight passes to Cody Hoffman before capping the drive with a 3-yard strike to JD Falslev with three seconds left before halftime.

The victory ended on a sour note. Hill suffered a season-ending knee injury when BYU offensive coordinator Brandon Doman called a quarterback run in the waning seconds instead of having the freshman take a knee to run out the clock.

Both teams took turns staging comebacks to produce the first and only overtime game in this rivalry series to date. In the end, Owen Pochman drilled a 33-yard field goal to give BYU the narrow victory.

Utah State jumped out to a 14–0 first quarter lead behind a pair of long touchdown passes from Jeff Crosbie. The USU quarterback connected with Adrion Pierson on a 32-yard pass and then followed up with an 87-yard strike to Aaron Jones. BYU shut down the Aggies for a while and looked to have the game in control after going ahead 31–20 on Tevita Ofahengaue’s 14-yard touchdown grab in the fourth quarter.

USU responded with 11 unanswered points and forced overtime on Demario Brown’s 4-yard catch and a two-point pass to Jones with 14 seconds left. The comeback ultimately fell short when Brad Bohn missed from 42 yards out in overtime after making field goals from 30, 47 and 55 yards during regulation.

Steve Young made his first start as a BYU quarterback while filling in for injured senior Jim McMahon. It set the tone for what Young faced against the Aggies during his time with the Cougars. BYU trailed or was tied with Utah State for three quarters before finally pulling away late in the fourth quarter.

Utah State took a 26–20 fourth quarter lead on the strength of three touchdown passes from Chico Canales. The Cougars tied it up on a 42-yard run from Waymon Hamilton. Then, BYU took its first and only lead when Todd Shell scored on a 12-yard pick-six to seal a 32–26 victory.

In three games against Utah State, Young posted a 2–1 record. The contests were decided by a total of 13 points.