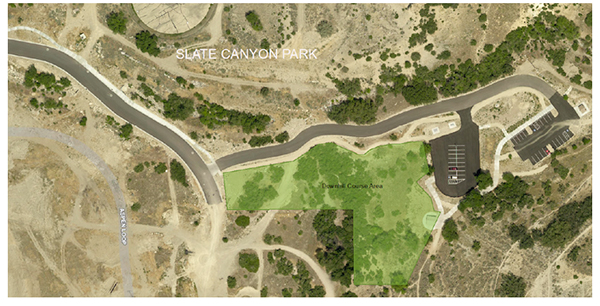 A new beginner to intermediate course is being built at Slate Canyon Park in Provo. (Photo by Provomayor.com)

Mountain bikers will have a new place to ride in Provo come spring, when the city finishes a course at Slate Canyon Park.

City crews started working on the beginning to intermediate course earlier this fall. City officials had hoped it would be done sometime this month. But construction has taken longer than originally expected. So now the completion date is later, and dependent on weather, said Thomas McKenna, the city’s parks and recreation project manager.

When it’s done, the downhill course will be 1,200 linear feet along the side of a hill, he said. It will have obstacles along the way that are perfect for beginning to intermediate riders.

“There’s not going to be any expert features. … The idea is people will traverse it, controlling their bikes over and around features.” —Thomas McKenna, Provo city parks and recreation project manager

“There’s not going to be any expert features,” he said. … “The idea is people will traverse it, controlling their bikes over and around features.”

The course was designed by Sagebrush Trails & Services, a local bike trail consultant, Mayor John Curtis wrote on his blog. Some of the funding for the course came through volunteer service by local neighbors, via a Neighborhood Grant from the Provo City Council.

The course is on the city’s parks master plan, and “has been on the radar a long time,” McKenna said.

Right now, crews are using a mini excavator to do a rough cut into the hillside for the trail, McKenna said. The city did a geotechnical analysis on the hillside to make sure that it would remain stable with a course cut into it.

“Above all, we want it to be a good experience for users and we want it to be safe,” he said. In addition to adhering to the geotechnical analysis while cutting the trail, crews are following guidelines for the height and distance between obstacles, to ensure user safety.

Once crews finish the rough cut, McKenna said it will be time to enlist volunteers. The city’s been working closely with the Provo Bike Committee, which has been putting together a list of volunteers to help finish the course.

Santa Backup: Shop with a Cop gifts children the right to remain happy during the holidays Next post