“Businesses come here and stay here because there’s a large skilled talent pool,” says Andrew Richardson, founder and CEO of EDGE — The Service Company. “A key to growing a business is having that personnel.” (Photo by Dave Blackhurst/Utah Valley Magazine)

When Andrew Richardson realized his corporate position wasn’t allowing him to grow, he jumped ship to do something that was never part of his job description. He became an entrepreneur.

Now he is CEO and founder of EDGE — The Service Company, which provides home services such as pest control and lawn care. But before EDGE started spraying and edging in our community, it went through its startup phase on the other side of the Rocky Mountains.

The company, which began in 2008, continued to grow in Denver until Andrew felt the need to relocate in order to fulfill his vision for the company. 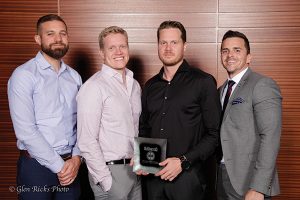 “We moved to Utah County because the talent pool is super rich here,” Andrew says. “They’re ambitious. They’re not afraid to go out and make it happen.”

EDGE exemplifies why Utah has been nicknamed “Silicon Slopes.” Even though the company focuses on home services, EDGE invested millions into process-automating software. This allows the 250 employees to concentrate on people.

“The more we focus on our ability to lift and bless, the more abundance flows,” Andrew says. “When we are focused on other people we find happiness.”

The lifting and blessing at EDGE isn’t limited to just the company and customers. Earlier this year EDGE partnered with the PTA to donate a much-needed copy machine and duplicator to Lindon Elementary. The company also regularly participates in giveback projects with the local women’s shelters.

“It’s important to give back when you have success in a community to show your appreciation,” Andrew says. “Utah Valley is our family, and they allow us to be a business.”

“It’s important to give back when you have success in a community to show appreciation. Utah Valley is our family, and they allow us to be a business.” —Andrew Richardson, founder of EDGE – The Service Company

EDGE has held a spot on both the Inc. 5000 and BusinessQ Magazine’s UV50 Fastest-Growing Company lists. Andrew was also finalist for Ernst & Young Entrepreneur of the Year. In 2015, EDGE hit an annual revenue of $15.7 million.

But what Andrew considers his biggest success doesn’t come from awards or dollar signs. It comes from his ability to look back and see how EDGE has made a different in people’s lives.

“The proudest moments I have are when I watch some of my partners build homes for their families,” Andrew says. “That honestly gives me goosebumps.”

Dance Valley: From ‘Dancing with the Stars’ to ‘High School Musical,’ Orem is center stage in the dance world Previous post