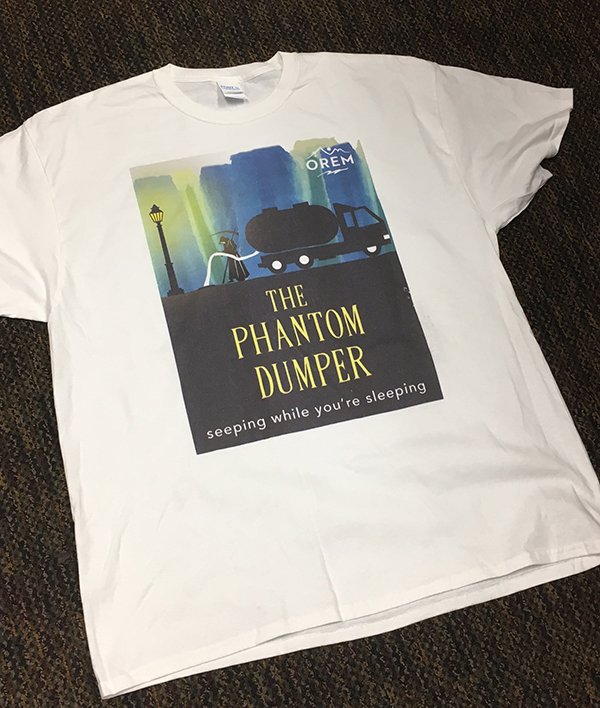 Orem‘s phantom dumper is still hard at work. The city got a break the week of Thanksgiving. But on Tuesday, the dumper was back at it — dumping some kind of natural, fibrous waste down one of the city’s manholes.

The dumping has been happening for months, and the city’s gotten a lot of tips from residents about possible culprits. Orem’s followed up on every lead, said city spokesman Steven Downs. But so far, none of the tips have led to the phantom dumper.

The city has a number for tips — (801) 229-7577. And it now has made T-shirts to draw more attention to the issue, he said. The shirt features a dumper illustration, and says “The Phantom Dumper, seeping while you’re sleeping.” The shirts are available at the city offices.

“We hope it keeps the conversation going,” Downs said of the shirts.

As to what’s being dumped, Orem officials sent some dumped material to a lab at Brigham Young University for testing, Downs said. The lab determined the waste was non-toxic. It’s some kind of fibrous material — sawdust or a paper product.

“It’s not going to hurt the lake or anybody’s home,” he said. “But it takes a lot of time and money to clean up.” So far, the city’s spent $40,000 to $50,000 to clean up the dumped waste, which damages equipment at the water reclamation plant.

“It’s not going to hurt the lake or anybody’s home. But it takes a lot of time and money to clean up.” —Steven Downs, Orem spokesperson

The next step is testing different types of materials to find a match, Downs said. That way the city will be able to narrow down what kind of business could be doing the dumping.

When the dumping started months ago, it was always on Thursdays. But Downs said it’s sometimes happening on other days of the week. It’s always at the same time, though. The waste hits the plant around 10 or 11 a.m., which means the dumping could be happening as early as 5 or 6 in the morning.

Water treatment officials haven’t pinpointed where the dumping is happening because there are thousands of manholes in the city and hundreds of miles of sewer pipes. But now Orem is in the process of installing sensors and samplers to narrow down the dumping location, he said.

No other Utah County cities have reported a phantom dumper of their own. But Downs said the city recently got a call from Hooper, Utah, which now has it’s own illegal dumper.

So, if you see a non-city truck with a hose going down a manhole, it’s probably the phantom dumper. Orem officials say don’t approach the person. You should write down the license plate number and call the hotline set up to report illegal dumping — (801) 229-7577.

Out of the slump and back on track, BYU defeats Utah State Previous post