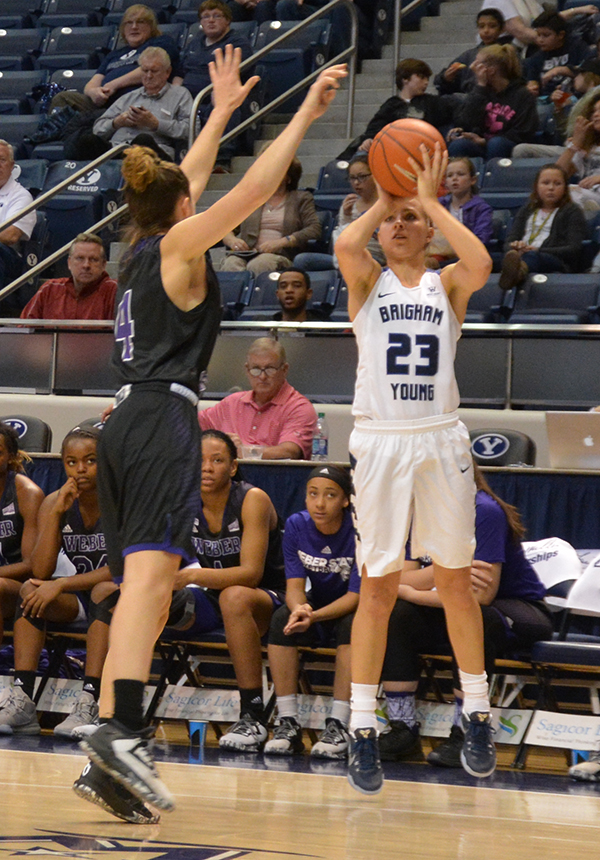 It was the battle of the threes — and BYU held victorious over in-state foe Weber State 73–64 on Wednesday afternoon in the Marriott Center.

While Weber State (6–2) hit most of its threes in the fourth quarter, making 4-of-10, it wasn’t enough to catch the Cougars. Riding the 3-point shooting success of BYU senior Makenzi Pulsipher, BYU (5–3) made 10-of-25 threes, shooting 40 percent from the 3-point line and 46.6 percent from the field. Pulsipher shot 6 of 13 from behind the arc and led the Cougars in scoring with 22 points.

“I haven’t shot anything good for the whole season, so I was glad that it finally opened up,” Pulsipher said. “When you’re a shooter against a zone, there’s nothing better because I don’t have to worry about moving as much. I’m already set. It was a great game to get my confidence back and get back rolling with things. I hope I can keep it up.”

“When you’re a shooter against a zone, there’s nothing better because I don’t have to worry about moving as much. I’m already set. It was a great game to get my confidence back and get back rolling with things.” —Makenzie Pulsipher, BYU senior

Weber State, which only ever led in the first quarter, gave all their effort, which included a full-court press for the majority of the game. The full-court press didn’t cause the Cougars many problems; however, the 2-3 half court defense took some adjusting for the Cougars.

“I’ll give my team a lot of credit,” said BYU coach Jeff Judkins. “We have not worked on a 2-3 zone all year. It’s the first time we’ve run this (offense).”

Once the Cougars adjusted — Pulsipher hit some 3-pointers and BYU senior Kalani Purcell created space with drives to the paint — the Cougars found an offensive rhythm.

“Weber didn’t man us tonight because there is no way they could of handled Kalani (Purcell) in the post,” Judkins said. “She would have chewed them up. They went zone and hoped that we would miss shots. I’m really proud of them because I knew they were tired. We didn’t have the energy that we normally have and it was probably more the defensive end tonight. They moved the ball well tonight and that’s when our team is good.”

Purcell ended the game with her third double-double of the season, 11 points and 11 rebounds. BYU junior Cassie Broadbent added 12 points and 8 assists.

The 11 a.m. game included a crowd of elementary school students, which Judkins and Pulsipher credited for helping the team as Weber State attempted to pull ahead in the last minutes of the game. Whenever “get loud” crossed the jumbotron, the students let out piercing screams. It worked — the closest they came was within four points.

“My ears were ringing,” Pulsipher said. “It kind of hurt. I needed both of my hands because I couldn’t hear a thing. It was really cool though, especially since we don’t have the fan base that the men’s team usually has, and I’m pretty sure the men’s team doesn’t have that many kids screaming, so we have a first time there. That was really fun. I’m really glad they took it so literally.”