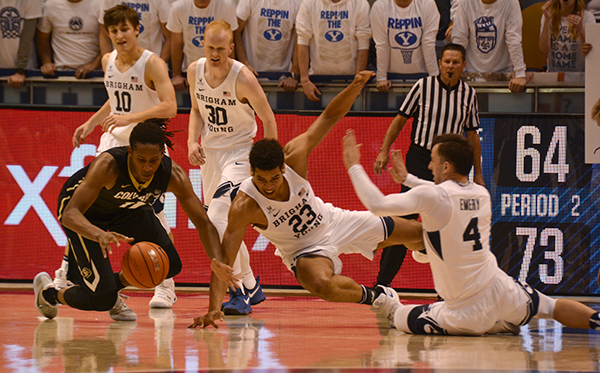 BYU freshman Yoeli Childs (23) and BYU sophomore Nick Emery (4) dive after the ball in a game against Colorado University at the Marriott Center Saturday night. The Cougars won 79–71. (Photo by Rebecca Lane/UV360)

Since the beginning of the season, BYU coach Dave Rose has reiterated one point over and over again — his team is young.

“We’re kind of a work in progress,” Rose said. “We’re not a polished item at all. Those effort games are going to make the difference.”

But the young Cougar basketball team (7–3) made a statement Saturday night with a 79–71 win over Colorado University (7–3) in the Marriott Center.

Beating CU is a huge resume builder for the Cougars, especially after CU defeated the then-No. 13 Xavier 68–66 on Wednesday. 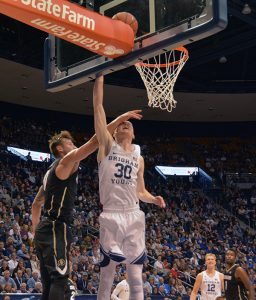 “I really felt like tonight was one of the best all-around performances of this group in that every guy didn’t have a great game as far as numbers are concerned, but every guy gave supreme effort,” Rose said. “We had some guys who really stepped up and played. Yoeli (Childs) and TJ (Haws), those two guys their stat lines are unbelievable. But the effort of every guy that went in I thought was tremendous for the whole game.”

Haws, who scored 16 points in 36 minutes of playing, said there was a “good vibe” in the locker room following the game and the game’s success came from a shifting defensive mindset.

“I think we’re a good defensive team,” Haws said. “What it takes is a defensive mentality. And we’re trying to change that before every game, coming to each game with a tough defensive mind set. And I think we came out tough tonight and we made hustle plays and I thought our defense was better tonight.”

Rose agrees with the progress he sees on defense.

“You need to play an attacking defense without fouling,” Rose said. “That’s a hard thing to find, especially when you’re helping each other. Tonight was good. I think we took a real step forward.”

Another freshman who broke out of the crowded bench was 6-foot-3 guard Steven Beo. Beo has been recovering from a thumb injury, but finally recovered and earned 21 minutes of play on Saturday night — and some of those minutes were during crucial moments, including the end of the game.

“We’re kind of a work in progress. We’re not a polished item at all. Those effort games are going to make the difference.” —Dave Rose, BYU basketball coach

“I was just doing what the coaches told us,” Beo said. “We want this defensive mindset, so every guy is going out there and giving it his all. Coach at the beginning said, ‘We’re going to get out there, give it our all and once we find that group that’s going to win us the game, we’re going to stick with it, so I guess he thought I was part of that group tonight.”

Rose noted that in 2015 then-BYU freshman Zac Seljaas, who is currently serving an LDS mission, had a break-out game against Colorado — and it might be a tradition for the Cougars with Beo breaking into the lineup. Plus, the team has many players missing some practice for injuries and some guys are getting worn out from excessive minutes.

“We needed to find another guy and we had a lot of conversation as a staff and we felt like we needed to give one of the guys a chance,” Rose said. “Steven stood out really well in practice. He’s played well. I think he would have emerged a lot sooner, but he hurt his thumb and that kind of slowed him down and set him back. I think he proved tonight that there’s a lot he can do to help our team, especially our guard line.” 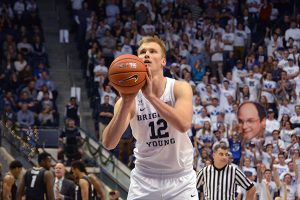 Eric Mika shoots a free throw during the game against Colorado University at the Marriott Center. Mika shot 11-of-13 from the free-throw line, which was the majority of his 17 points. (Photo by Rebecca Lane/UV360)

Childs — who recorded his first double-double Saturday night with 11 points and 12 rebounds — started his 3rd game as senior Kyle Davis has limited minutes because of knee injury. Despite not practicing with the team, Rose said Davis is giving the team quality minutes which translates in this particular game to 4 points and 3 rebounds in just 11 minutes of play.

Davis isn’t the only player out with an injury right now; BYU transfer sophomore Elijah Bryant is also out with a knee injury.

As far as seasoned players go, BYU has relied heavily on the leadership of sophomores Nick Emery and Eric Mika. Emery led the team in scoring with 22 points. Mika added 17 points and 7 rebounds, but the interesting stat is where Mika earned the majority of his points — the free-throw line. While the team struggled from the free-throw line only hitting 18–29 (62.1 percent), Mika hit 11-of-13 free-throw shots.

“To me, the most telling thing is his confidence when he catches the ball in the low post,” Rose said. “Because he knows if he gets fouled, he’s going to the free-throw line and he’s going to make them. And he feels comfortable there and he wants to be there. That has been a huge part of the success he’s had offensively because he’s so aggressive in that low post area because he wants to get the foul.”

BYU has a week break before heading to Chicago to play Illinois on Dec. 17, but first the Cougars have another challenge — finals.