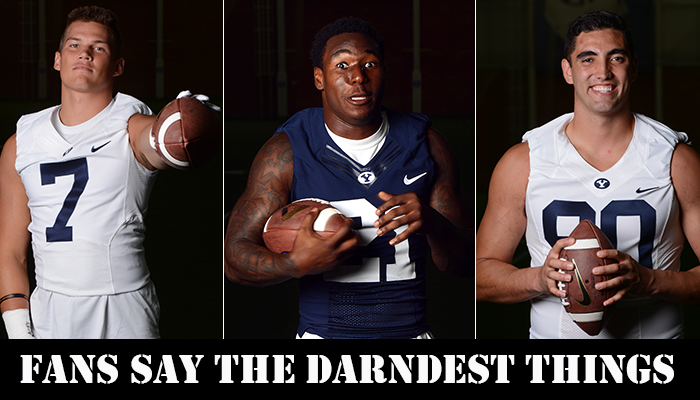 At the beginning of the season, we asked a few BYU football players what the funniest thing a fan has ever told them. Here are nine are-you-serious statements from BYU fans.

“Someone called me Benedict Sitake one time. And that made me laugh. I think he was being funny, but it was all in good fun. Most fans are just funny. I have a good time with it.”

That I was so handsome just because of my name.” 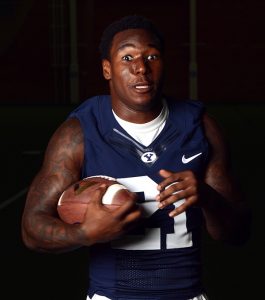 After a game, a fan asked Jamaal Williams if he could have his used ankle tape. (Photo by Dave Blackhurst/UV Mag)

“’Will you marry me?’ That’s been pretty strong, pretty bold.”

“I think there’s a tweet they tweeted where they said they named their dog after me. It was pretty cool.”

While Nacua doesn’t know what type of dog it is, he said, “It doesn’t matter — it will be a beast.”

“Can I have your ankle tape? They really just wanted the ankle tape. The tape that was on my ankles. After the game. When I was taking it off, they asked for it.” 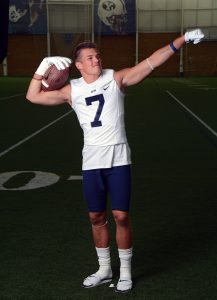 “I think the funniest thing that not just one fan but a whole set of fans did was when we were playing Wagner last year. We didn’t punt, and they started to chant, ‘Put Jonny in.’ I thought it was pretty funny, and I appreciated that.”

“One time I tweeted something and I misspelled a word and they told me I needed to get a better ‘edumacation’ at BYU.”

“A fan this year got mad at me for being number 7 because Taysom (Hill) is number 7. At one of the FanFests this year, this lady was getting mad at me for like 10 minutes that I stole Taysom’s number. That was pretty funny because I was number 7 last year and then Taysom switched to number 7.”

Find out the most embarrassing moments these BYU football players have had on the field here.

12 variations for your 12 days of Christmas countdown Next post