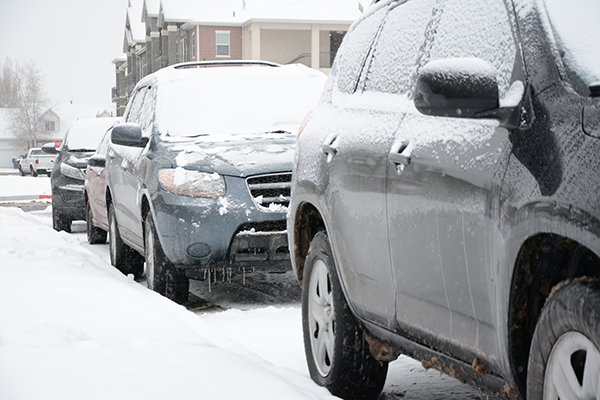 Winter snowstorms have caused dangerous road conditions throughout Utah County at the start of the New Year. Provo City School District even delayed the beginning of the school day by two hours on Thursday. (Photo by Rebecca Lane/UV360)

When Provo’s Cody Bringham found himself stuck in the same location in Provo twice in one day, he met his snow day hero — a Provo police officer.

However, Bringham’s initial reaction upon meeting the police officer wasn’t positive. Following heavy snowfall on Monday, Bringham left his house to go pick up something from his office when he got stuck on University Ave. north of 880 North. That’s when an unknown police officer pulled up.

“The disturbing thing that happened was when he first rolled up, my first thoughts were, ‘I’m in trouble for something. I’m blocking traffic. I’m going to get a ticket,” Bringham said in his Facebook video.

That was not, however, the case. The police officer put on gloves and helped push Bringham in his Honda Civic out of the snow.

On his way home, Bringham once again got stuck in the exact same spot. Within 30 seconds, the same police officer pulled up and got out of his car.

“We joked around about it, but he didn’t make fun of me and he wasn’t rude,” Bringham said.

And this positive experience was disturbing to Bringham — not because of the service-oriented police officer, but because Bringham’s thoughts had initially focused on the negative.

Since Bringham couldn’t get back to his home because of a slippery slope leading to his place, he went to a Smith’s parking lot and decided to share his experience online with his friends.

“I thought I might get some views from friends,” Brigham said. “I just noticed the views starting to go up and I started getting some shares on it from people in my life who have friends who are police officers and it hit the point where it just tipped and got a lot of views.”

“We need to turn police officers back into heroes instead of villains.” — Cody Bringham

The video, which was posted on Tuesday morning, had nearly 7,000 Facebook shares and had more than 479,000 views Thursday morning. It even reached the unnamed officer who had helped him twice in one day.

Bringham received a Facebook message from his hero Officer Austin Williams of the Provo Police Department. Williams wrote Bringham after his wife showed him the viral video: “Really though most of our department is made of of officers like this. So if you didn’t use my name as to give more credit to the whole department/profession rather just one individual that would be great too.”

Bringham says there are two solutions to negative attitudes toward police officers: obeying the law and have a better attitude towards police officers by sharing positive stories.

“We need to turn police officers back into heroes instead of villains,” Bringham said.