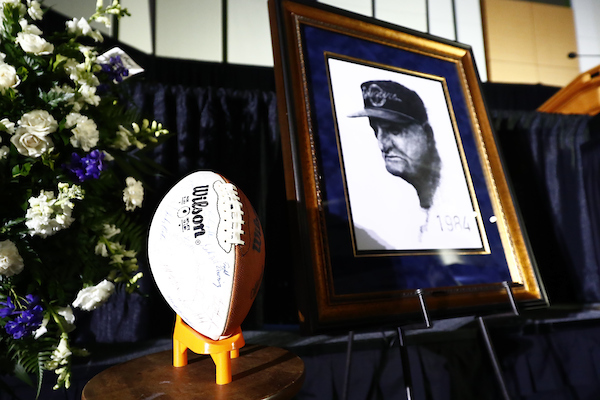 Life encompassed something much greater than winning football games for LaVell Edwards. Nowhere did that message come through more clearly than how he approached building up the players on each one of his teams during his 29-year career as BYU’s head coach.

When a legion of former players, friends and family assembled at the Utah Valley Convention Center to honor the memory of Edwards at a public memorial service on Friday night, they shared a near-universal message. The greatest victories for Edwards didn’t come in the stadium bearing his name or in the Holiday Bowl. They came in how he molded and shaped the lives of the players under his watch.

“He knew each of us individually and he knew what we needed to be motivated to become better people,” former BYU quarterback Robbie Bosco said. “That was a unique thing, kind of a magical thing he had. I’ve never seen it in anybody else.”

The stories they shared about Edwards painted a picture of a coach who influenced lives beyond touchdown passes and conference championships.

Gary Sheide did not believe Edwards’ recruiting pitch the first time he met him. Edwards told him they planned to switch to a pass-first offense and he needed Sheide to make it happen. BYU had the nation’s leading rusher in Pete Van Valkenburg in 1972 and Sheide could not see where he fit into the offense. He dismissed Edwards after a short conversation lasting less than 10 minutes.

Edwards was not deterred. He came to visit Sheide again and, this time, made the recruiting pitch to his parents. They were sold on the vision Edwards shared over dinner and convinced Sheide to go to Provo. He committed to the Cougars and became the first in a long line of record-setting quarterbacks who helped put BYU football on the map.

Sheide himself also changed just as dramatically along the way. He joined The Church of Jesus Christ of Latter-day Saints. He met his wife at BYU and all five of their children served LDS missions.

“My life changed from when Coach Edwards was able to be persistent with me and get me out there,” Sheide said. “He just changed my life.”

Bosco had a tough position of replacing Steve Young at quarterback following a season where BYU finished in the Top 10 and won the Holiday Bowl for the third time. Worse yet, his debut came on the road at No. 3 Pittsburgh.

Things started out rough for Bosco. His first three pass attempts went all over place. The first one sailed over his receiver’s head and went 20 feet. The second one hit the receiver in the back of the head. The third one went to the receiver’s feet.

Edwards calmly approached Bosco as he came off the field. He put his arm around him and told him to not worry about those passes. Edwards told Bosco he didn’t need to look over his shoulder. He was their guy and he had total confidence in him.

Those words changed everything for Bosco throughout the remainder of the game and the 1984 season.

“That little talk right there taught me a lot and it did give me a lot of confidence,” Bosco said. “It did let me know that I’m not out there by myself. I have great teammates and I have a staff that’s right there with me.”

Jim McMahon shattered a volume of NCAA records during his BYU career. He rewrote the book on what a quarterback could do in the Cougars’ offense. He also struggled with numerous off-the-field issues while in Provo.

It led to regular Monday meetings with Edwards. Rather than berate McMahon for his shortcomings, Edwards worked with his rebellious quarterback showing humor and patience. They developed a strong relationship and, later in life, McMahon returned to finish his degree and graduate from BYU because it was what his parents and Edwards wanted from him.

“He’s a special guy. He’s well respected not only here in Utah, but all around the country in the football world. Anybody who’s ever met him is better for it.” —Jim McMahon, former BYU quarterback

For McMahon, Edwards meant everything to him both in football and in life.

“He’s a special guy,” McMahon said. “He’s well respected not only here in Utah, but all around the country in the football world. Anybody who’s ever met him is better for it.”

When Vai Sikahema arrived in Provo as a freshman, Edwards became an instant role model. Sikahema observed how Edwards treated his wife Patti and liked how he saw nothing but kindness and respect.

He vowed to push himself in all areas of his life so he could have that same experience with his own family. Seeing Edwards lead by example pushed Sikahema to build a successful NFL career, a happy home and family. He had a chance to visit with Edwards over a weekend when the former BYU coach came to visit him while serving as an LDS public affairs missionary in New York City.

Edwards openly wondered, during that visit, if his purpose at BYU was to win championships or be a leader. For Sikahema, the answer was clear. Edwards’ true purpose was to fill both roles because of how his example molded his own life.

“He started from scratch with a lot of us,” Sikahema said. “Whatever you were, whatever station in life you were in, whatever your ability or lack of ability – he just started from where you were and helped you see yourself in a different way and for much more than what you ever expected.”

5. Edwards empowered those around him 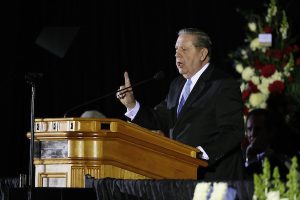 During his tenure as BYU President — and long after he moved on from that position — Jeffrey R. Holland and his wife Patricia regularly had dinner with LaVell and Patti Edwards. They often talked about BYU football during these dinners and, one time, Holland inquired about Edwards’ sideline demeanor. He famously stood there with a stoic frown, with his arms folded, rarely showing emotion regardless of what happened on the field.

Holland jokingly wondered why Edwards didn’t jump up and down, kick over a barrel or do something to show he was watching the same game as the fans. Edwards told him that he decided long ago to coach football the way he tried to serve as a bishop in the LDS Church. For him, that meant trusting those who worked with him to assume certain responsibilities and letting them flourish in those capacities.

It allowed Edwards to bring in players and assistant coaches who elevated BYU football to a national power. He deflected credit away from himself and towards them, even as he changed football history.

The Best Not Say That Again: 13 phrases that need to take an early retirement Previous post

Faces of Fitness: The Queens of Zumba Next post