Faces of Fitness: The Queens of Zumba 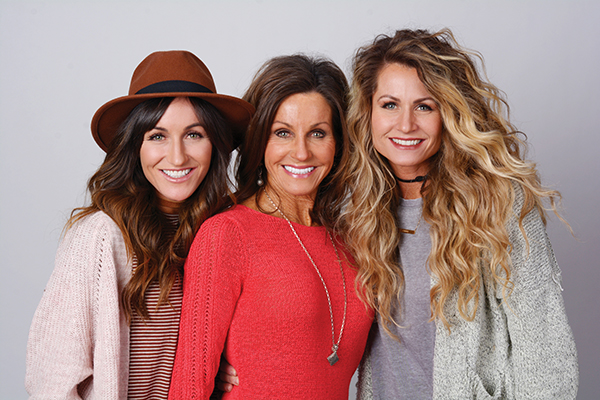 Kass Martin (left) and Emily Engemann (right) are known as the Zumba queens. Their latest whirl is being some of the faces on the Zumba Country DVD. Group fitness royalty is in their blood. Their mom, Laura Aston (center), is known for classes overflowing with love whether it be her Step class or her Silver Sneakers program. (Photo by Dave Blackhurst/UV Mag)

Across the world, people lace up their dancing (tennis) shoes for Zumba with Kass Martin and Emily Engemann.

With classes filled to capacity and a tangible energy, these local sisters create an environment where people not only reach fitness goals, but also feel loved and included.

While many have danced alongside them, many Zumba followers may not realize that the origins of Kass and Emily’s boogie love traces its roots to their mother.

“Fitness has always been in our blood,” Emily says. 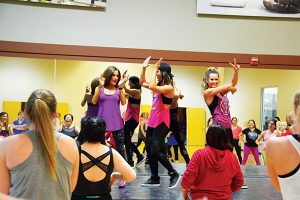 Laura, Kass and Emily all have a love for group fitness. Kass and Emily get everyone dancing in Zumba and Laura puts movement to music with Step and Silver Sneakers classes. (Photo by UV Mag)

Their mother, Laura Aston, sparked within them a love for group fitness and a passion for combining fitness with music.

Laura’s husband would ride his bicycle alongside her while she ran and he would sing her songs with a beat to help her keep the pace.

Over 30 years ago when the local paper advertised a gym opening up, Laura wanted to become an instructor.

“I thought I would just go in and fake it,” Laura says. “But I tried out and they hired me.”

So this mother-of-five received her certification and began teaching right after giving birth to Kass.

Laura’s classes have always been guided by one principle — love.

“I want to know every single person’s name and say it when they enter,” Laura says. “It throws off my choreography sometimes because I pause to say, ‘Hi Sue!’ but names are so important.”

After Kass became a mom, Laura suggested that she start teaching as a way to do something for herself.

“My mom could see that I forgot what I liked to do outside of taking care of kids,” she says.

“If you are looking for good in the world that will be your reality.” — Emily Engemann, Zumba instructor

Kass began her dance career back in high school by mistake — she slept through soccer tryouts and didn’t make the cheer team. These accidental dance skills came in handy when Kass —  who had become a mother-of-two — took her mom’s advice and started to teach a class called Hip Hop Hustle.

Her first students were her mom and a man who worked as a mime. She remembers subbing for classes that would have 80 participants as it started, but only 16 would stay until the end.

In 2010, Kass found her groove with Zumba, which allowed her to add her own style and creativity into her classes.

Her journey led her to audition for the official Zumba DVDs and when she made the cut, a conversation with founder Beto Perez shaped her future.

Kass soon learned what it meant to be the new face of Zumba. Her calendar was filled with television appearances ranging from QVC to “The Today Show” to promote the DVD.

With her busy schedule Kass knew she needed a sub for the days she couldn’t teach so she turned to someone she knew could match her style — her sister.

“Emily is the front-row goddess,” Kass says. “Everyone is watching her. It didn’t matter if I was there or not, as long as Emily was there.”

Emily was apprehensive about taking over teaching. She loved attending classes, but teaching had always been Kass’ specialty. Her dad, Mike Akin, gave her some advice she embraced and applied.

So mother-of-five Emily joined the ranks of Zumba, creating a vibrant energy in classes at the Orem University Vasa Fitness. 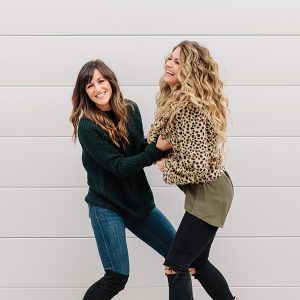 In addition to spreading joy through Zumba, sisters Kass Martin and Emily Engemann share doses of positivity on their blog, Little Bits of Awesome. (Photo by Meikel Reece Photography)

The next year at a Zumba convention in Orlando, not only was Kass instructing 7,000 students from the stage, each hotel key had her face on it.

“I was honored because Zumba did so much for me — it helped me find myself,” Kass says.

The reason Kass and Emily have become the most well-known Zumba sisters is because they are more than instructors — they are friends to their students.

“People send us messages saying their lives have changed,” Emily says. “They came in a dark place and now all of a sudden they have a place to go every day and people around them who support them and embrace them.”

Realizing the power of their positivity, Kass and Emily started a blog, Little Bits of Awesome, with the mission of finding the silver lining in each day.

“We don’t want to paint the picture that we have a perfect life,” Emily says. “But you create your own happiness. If you are looking for good in the world, that will be your reality.”

And the sisters’ optimism — as well as their fitness fetish — traces its roots back to Laura.

“My mom doesn’t talk bad about anyone,” Emily says. “She chooses to get up every day and count her blessings and think about the good.”