Faces of Fitness: The Iron Cowboy 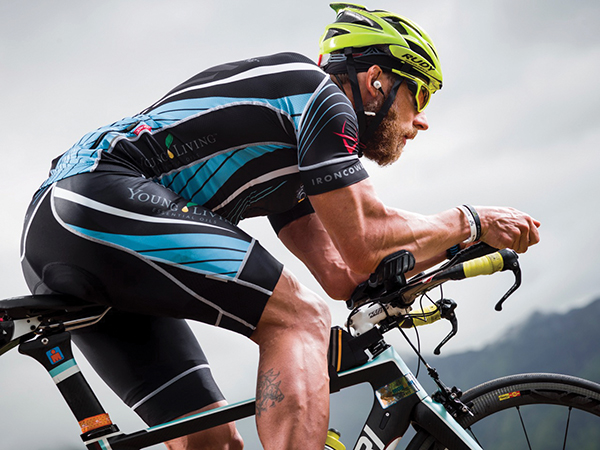 The son of a life-long firefighter, James has turned his endurance success into a multi-media business including books, movies and speaking engagements. (Photo by JayBird)

James Lawrence isn’t a cowboy. And, despite feats that may suggest otherwise, he’s not made of iron. However, to fans around the world, the record-setting triathlete is known for his cowboy persona and his no-way-he-just-did-that accomplishments.

But he is a physically fit, mentally tough (to an exponential degree) Orem father of five who believes something magical happens when people put themselves in situations that allow them to do hard things.

For James, his “hard thing” was completing 50 Iron Man triathlons in 50 states in 50 days. In 2015, he packed up his family and support team and set out on the ultimate test of endurance.

“I had every reaction before and during the 50-50-50,” James says. “I even had a sponsor who said he didn’t think I could do it, but they would put their money with me to see how far I would go.”

People following him on his incredible journey — which finished at Thanksgiving Point because James wanted to be close to home so he wouldn’t have to travel far to get to his own bed — shared the transition from “no way” to “he’s gonna do it.”

Even James had to have a change of mental outlook. Finishing this ultimate test of physical — and mental — fitness wasn’t something James took for granted. With beat-up feet, fatigued muscles and the repetition of doing the same thing, day after day, he had to work through his own mental limitation to reach his best.

“The reason I believe most are unsuccessful in their fitness goals is that there’s a time when your body and mind are in total alignment, but most people quit right before that harmony,” he says.

That harmony is when your mind helps you keep going when everything in your body is convincing you to stop.

“My journey started with me getting off the couch and struggling through a four-mile fun run in 2004.” — James Lawrence, the Iron Cowboy

“I reached that point in the 50-50-50, but it wasn’t until No. 30,” he says. “The last 20 were my fastest. I reached a point where completing an Iron Man became a daily routine for me — which sounds totally moronic. Most would quit before that because it’s too big of a mountain.”

This mind-over-matter isn’t new for James.

When he was young, he wrestled, enjoying the mental part of defeating an opponent. As he got older, golf — and its requirement for mental focus — became his sport of choice.

Then, after moving to Utah from Canada and meeting his wife, he started running. And believe it or not, he started like other beginning runners.

“My journey started with me getting off the couch and struggling through a four-mile fun run in 2004,” he says. 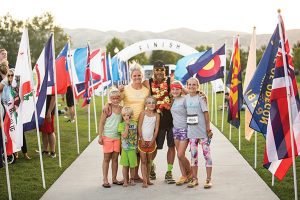 James Lawrence’s family joined him on his journey to finish Iron Man triathlons in 50 states in 50 days. (Photo by Jessa Maddocks)

In fact, James doesn’t have any genetic outliers that make him noteworthy — he’s been tested — unless you count his work ethic and mental toughness.

“What got me to my goal was to take the first step and then have the focus and drive to continue to take that step,” James says. “People see the results that come from five years of work, but they don’t see the steps you took in the first one or two years that got you into the good habits.”

To maximize the best results for the rest of us, James suggests a similar one-step-at-a-time approach.

“Start with easier things and slowly add,” James says. “People try to do the intense program from the beginning and then they fail. Failure sidelines you. Start with realistic goals and then work up.”

While he uses social media in his business and personal life, James warns of getting too caught up in what shows up in the feed.

Now that he’s tested himself with the 50-50-50, James spends his time working as a coach, a speaker and an author. In March he’s releasing a book about his record-breaking journey (pre-order is available at IronCowboy.com) and has a documentary available on Vimeo.

But, through all of this, he stays focused as a father and hopes to take the best of Gen X and mix it with the characteristics he finds more often in Millennials.

And he’ll do it one step at a time. 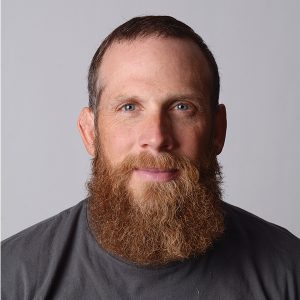 James Lawrence earned money to move to Utah by winning a radio contest in his native Canada,

The challenge? Stay on a Ferris Wheel for 10 straight days.

He did it and used the money to move south. After meeting his wife, Sunny, in a class at UVU, the couple began a family, which numbers five children.

“We didn’t anticipate how much others would like it,” James says.

His Iron Cowboy brand has become easily recognizable during Iron Man competitions and other races.

Go Fish!: Of all the fish in the local restaurant sea, Tsunami at Traverse Mountain has the best sushi Next post