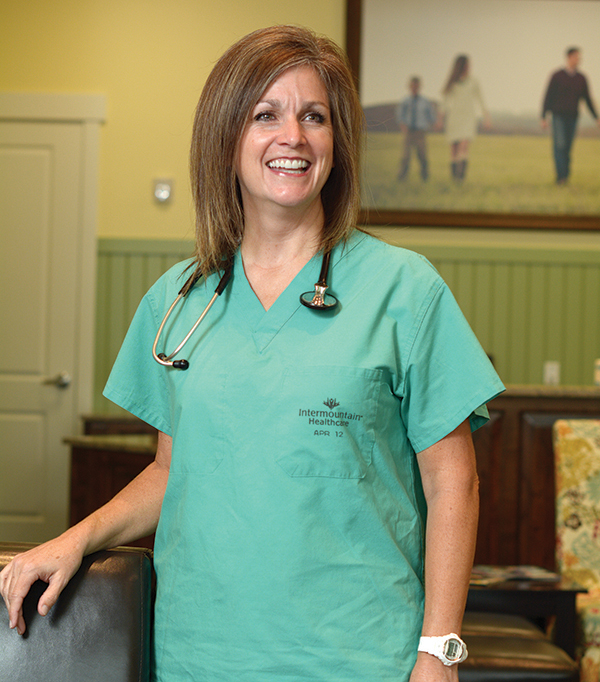 “Being a woman has only helped me as a physician in Utah Valley. I’d like to say I’ve been successful solely because I’m a great doctor. But I can’t ignore the fact that there was a need in this valley for female physicians, and that’s in some way contributed to my success,” Savage says. “What’s more, there were a few women before me who helped pave the way. We’re all in this together.” (Photo by Dave Blackhurst/UV BizQ)

The founder of Grandview Family Medicine is working her dream — helping patients, working alongside her husband, being a mom to her six children, living her LDS faith, and paying it forward. And her ability to “do it all” comes down to one key component.

“You can do anything and be anything if you are willing to work hard enough,” she says.

And work hard she has. Savage’s journey from medical school to owning her own practice has been a case of true endurance.

“We knew it would be hard ­— and it was harder than we thought it would be,” she says. “But the reward has been far greater than we could have ever imagined.”

Savage was teaching high school math when her husband, Dray, came up with the idea for her to go to medical school. He noticed the lack of female physicians in Utah County, and he knew Savage was good at math and science, was a great teacher, and was amazing with people.

So they did. Savage went back to school for a year to take some chemistry and physics classes. She had her third baby, and then she started medical school at the University of Utah at age 29.

“Anytime something seems hard, we just dive right into it with hard work.” – Dr. Shelly Savage

Life was busy. Really busy. But the Savages had a system.

“When you first go to medical school, you’re in class from 8 a.m. to 3 p.m. like a normal person,” Savage says. “My husband was fortunate to have a swing shift job at night, so he was at home with the kids during the day. He also did the cooking and cleaning so that when I got home from school, I could be present with my kids. Then, after the kids went to bed, it was time to study.”

When the third year of medical school started — complete with rotations in the hospital — their perfectly balanced plan came to a halt.

“It quickly became clear that we needed a new plan. We were busier than ever, our times were overlapping, and I was pregnant with our fourth child,” she says. “My husband quit his job so he could stay home with the kids and I could continue my schooling. I don’t know why that’s making me emotional right now — it hasn’t for a long time. But for the last year of medical school and for all three years of my residency, he stayed home with our kids so that our family could continue to be our priority. He saw the big picture.”

That big picture, ultimately, was for the couple to open their own practice. Savage would be the primary physician, and Dray would run the business.

“As a couple, we’ve always been focused on the exact same goals,” she says. “Our faith comes first, our family comes a close second, and then our career comes third. We know as long as we keep that perspective, we’ll be OK. It won’t always be easy, but it was always be doable.”

“We were making these decisions at 27, and as we counted out the years, we realized we’d be 37 by the time we were done. At the time, it seemed so daunting and far away. But then we thought, ‘Well, we’re going to turn 37 no matter what we do! We might as well get started.’ It’s been a great lesson for us in life. Anytime something seems hard, we just dive right into it with hard work.”

“My husband wants me to downplay his role, but I won’t do it. The business needs both of us to be successful. Because of him, I get to focus solely on patient care, and he makes sure the business is healthy and growing.” – Dr. Shelly Savage

On Aug. 6, 2002, the Savages opened up their own practice — Grandview Family Medicine — on the same date as their wedding anniversary. And in August of 2015, they unveiled their brand new building in Provo, a property they built and tailored to every need and want.

A big reason for Grandview’s success is the distinct roles Savage and her husband each play.

Pulse of the community

“I can’t say enough good things about being a woman in business in Utah Valley. There are so many people here who want to support women and their entrepreneurial endeavors,” Savage says. “What a community we have! It’s a great place to be, and it’s been very good to me. I will take every opportunity to give back ­— to pay it forward.”

This is one of five stories featured in the “Boss Ladies” section of Utah Valley BusinessQ.

Go Fish!: Of all the fish in the local restaurant sea, Tsunami at Traverse Mountain has the best sushi Previous post

7 ways to be a more present parent  Next post