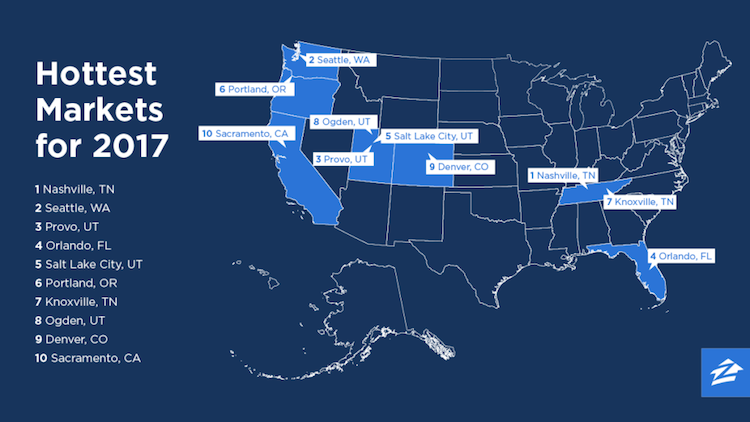 “Zillow’s 2017 list highlights that jobs and opportunities are increasingly growing in smaller markets away from the coasts,” said Zillow Chief Economist Dr. Svenja Gudell in a press release. “Mid-size cities like Salt Lake City, Portland, and Nashville are desirable places to live, with good employment opportunities and steady economic growth. The growth and demand for housing will drive up home prices in 2017, and these hot markets are experiencing change as more people discover them.”

There were three variables Zillow used to determine its Top 10: Zillow Home Value Index forecasts over the next 12 months, recent income growth, and current unemployment rates. The company looked at the 100 largest U.S. metro areas in its search.

Provo was highest ranked on the list of the Utah cities. With a 2.7 percent unemployment rate and 4.3 percent home appreciation rate for 2017, the city came in No. 3. Salt Lake was ranked No. 5 and Ogden placed No. 8.

Utah had the most cities ranked in the Top 10. Zillow’s “Top 10 Hottest Housing Markets for 2017” in order are:

7 ways to be a more present parent  Previous post