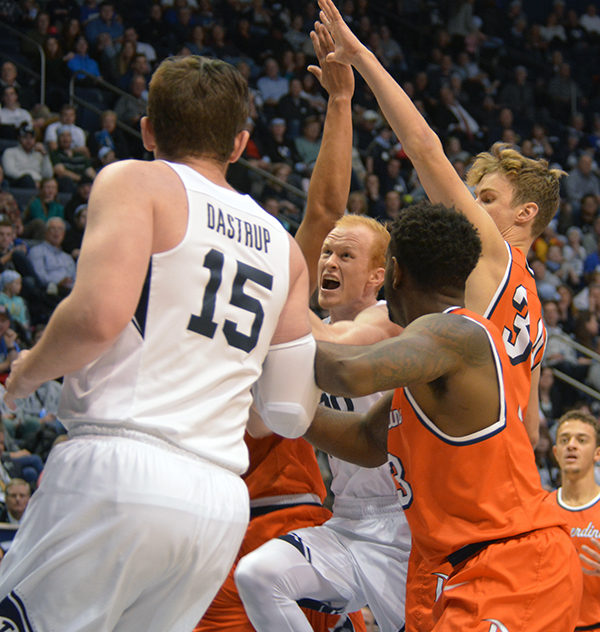 BYU freshman TJ Haws drives to the basketball through three Pepperdine defenders. Haws tallied 8 points and 6 assists in the 99–70 win over Pepperdine Thursday night in the Marriott Center. (Photo by Rebecca Lane/UV360)

BYU bounced back from a disappointing conference loss last week with a offensive dominant 99–70 win over Pepperdine in the Marriott Center Thursday night.

“We definitely do a good job of sticking together as a team, both coaches and players,” said Eric Mika, BYU sophomore forward, “all of us sticking together and trusting in our ability to bounce back and play better and learn from the mistakes we made in our losses, so I think we’ve done an awesome job of that. I’m happy to be part of a team that can do it because it is not as easy as it looks.”

Mika led the team with a double-double (22 points and 10 rebounds) in a game that gave all 14 members on the roster a chance to play. No one player spent more than 23 minutes on the court while the shortest amount of time was 4 minutes. That could be because, despite all the starters sitting the bench with 8 minutes remaining in the game, the offensive onslaught continued.

“When this team plays with the right mindset and they’re aggressively attacking and sharing the ball, we’re much better offensively,” said BYU coach Dave Rose.

“When this team plays with the right mindset and they’re aggressively attacking and sharing the ball, we’re much better offensively.” — Dave Rose, BYU basketball coach

“There’s no question that one of our top three things tonight was to be the aggressive teams,” Rose said. … “That’s a mindset and that’s something you can control as a player how consistent you are at that.”

Rose commended BYU freshman Yoeli Childs for leading the team with 14 rebounds, but also gave credit to Mika and the guards who chased down the balls that bounced far from the basket.

“If you can break any of Jimmer’s records, you’re probably doing something good,” Rose said. “Nick is a really aggressive player. Tonight he got himself into a little bit of foul trouble, but he had a really tough assignment. I think that’s where he’s really growing. He’s growing in his ability to take the tough defender and still being able to score for us.”

BYU next travels for a game against Pacific on Saturday, Jan. 21, at 4 p.m. MST.