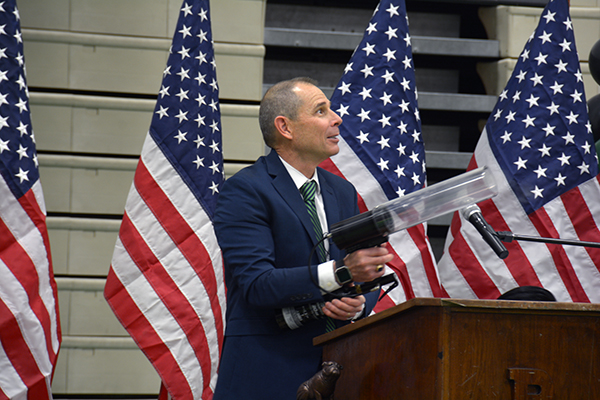 Provo Mayor John Curtis shoots T-shirts and socks into the crowd of Provo High students at the State of Provo address on Thursday morning at Provo High School. (Photo by Rebecca Lane/UV360)

This year Provo will tackle parking problems with new vigor, start working on expanding the airport’s terminal, turn BRT critics to fans, work on a city center solution, and more.

In front of the largest crowd ever for a Provo State of the City address, Mayor John Curtis listed his goals for 2017 — his last as mayor. Speaking to the Provo High student body and others in the school’s gym, there was video (Curtis played a student; Provo study body president Samuel Li played the mayor), a speech by Provo High senior Eliza Stemmons, music and more. Curtis even shot prizes — including socks, of course — into the screaming crowd.

“We have every reason to be hopeful for 2017 and beyond,” he said. “I look forward to an increase in citizen engagement and community voices helping us as we solve problems and plan for a prosperous future ahead.”

“We have every reason to be hopeful for 2017 and beyond. I look forward to an increase in citizen engagement and community voices helping us as we solve problems and plan for a prosperous future ahead.” — Provo Mayor John Curtis

• Parking: It’s no secret that parking is a problem in Provo. There are problems in the neighborhoods surrounding BYU, downtown, and other areas in the city. This year Provo will hire its first-ever full-time parking coordinator. “It will be the first time in Provo history that parking will have full-time attention,” Curtis said.
• Airport: The city will start work to expand the terminal. An expanded terminal means more flights to more places.
• Streets: The city will form a group with engineers and other public safety leaders to find solutions for speeds on residential streets. Curtis’s administration also will work to get Complete Streets standards adopted, so roads are friendly to all modes of transportation.
• BRT: The project is well underway, though there is a pending lawsuit over a referendum effort. Curtis’s goal: “Find a way to make BRT critics pleased with the project.” 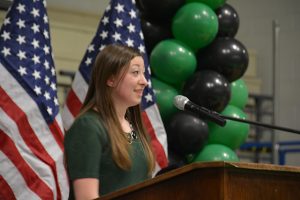 Provo High senior Eliza Stemmons speaks at the State of City address in Provo on Thursday. (Photo by Rebecca Lane/UV360)

The building, which sits on West Center Street, houses city administration and public safety. But it’s in bad shape. It’s 40 years old. It needs renovations and upgrades. “First responders are in a building that will not survive an earthquake,” Curtis said. With that in mind, the city will look for answers this year. Renovate? Move? Demolish? The study will focus on conducting public business in an efficient manner, “all with an eye to protect your tax dollars.”

Provo’s on a lot of top 10 lists — best places to live, best for families, best for business, on and on. Curtis wants to keep that going. He’ll focus on:

• Improve air quality efforts
• Keep building new parks, funded by the RAP tax
• Vote by mail
• Enhance use of Utah Lake
• Get the right type of development in the right places: “Good zoning only works if we’re able to adhere to standards,” Curtis said.

Curtis recognized that there’s work to do on Provo’s retail situation. People want more options in the city. This year, people will see development at Plumtree Shopping Center (now The Mix at River’s Edge), Provo Towne Centre and The Shops at Riverwoods. He didn’t give any detail, though.