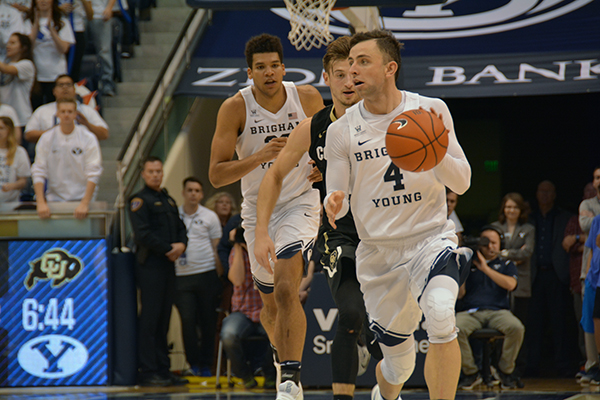 BYU sophomore Nick Emery brings the ball up the court in a game against Colorado. (Photo by Rebecca Lane/UV360)

Nearing the halfway point of the season, the Cougars hold a 13–6 overall record and a 4–2 record in the West Coast Conference, enough to keep them in third place underneath AP Top 25 teams Gonzaga and Saint Mary’s.

College competition has shown its harsh realities to the young Cougar basketball team composed of players whose high school careers filled with the feeling of winning (BYU freshman TJ Haws earned four 5A state championship title while at Lone Peak High School). However, the Cougars haven’t allowed loss to bog them down. Except for one back-to-back loss (Valparaiso followed by the 114–101 UVU upset), the Cougars haven’t lost two games in a row.

“It’s a confident team,” said BYU coach Dave Rose. “I think that they respond to about everything. They are a very coachable team and I think that the most important thing when we get beat is they all feel it, that we want to stay and not go off on our own, and then get ready for the next challenge. The big picture is what everybody wants, but as a player you take really small bites, and that’s what I think this team so far has done really well.”

Most recently, BYU is coming off of a 88–75 loss to San Diego, but the loss has only motivated the team to sharpen their focus.

“They are a very coachable team and I think that the most important thing when we get beat is they all feel it, that we want to stay and not go off on our own, and then get ready for the next challenge.” — Dave Rose, BYU basketball coach

“I think this team has a good mindset just going into practices,” said Nick Emery, BYU sophomore guard. “Obviously, we were disappointed after San Diego. Our mindset going into that game wasn’t right and the one thing about BYU is we do bounce back from our losses and we learn from our losses and that’s what we’re doing right now. We’re learning from the loss we just had and I think we’re going to be ready for Pepperdine tomorrow.”

The Waves (5-13, 1-5 WCC) are currently ranked last in the WCC — with the sole in-conference win coming against Loyola Marymount — but Rose says the team isn’t overlooking the bottom of the conference.

“This is a big challenge here,” Rose said. “This is a good team that is coming in here that has had some real difficulty throughout the year with injuries and stuff. They’ll be ready for us.”

Rose says Pepperdine is aggressive defensively and that they have three threats in seniors Lamond Murray Jr., Jeremy Major and Chris Reyes.

“Those three seniors are carrying them and they’re really good players,” Rose said. “You’ve got challenges in making sure they don’t all have a big night on the same night.”

The Cougars play the Waves at 7 p.m. Thursday, Jan. 19, at the Marriott Center in Provo, Utah. The game will be broadcast on BYUtv.