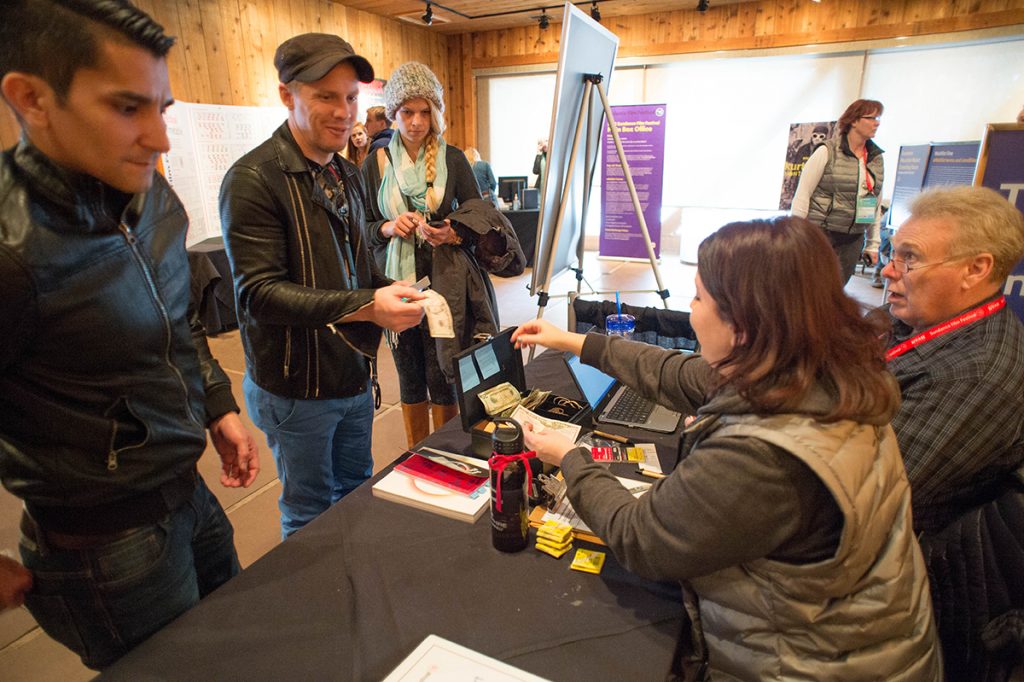 Sundance Film Festival volunteer Trish Hopkinson, left, sells a ticket to Chris Allen of hit band Neon Trees during the 2015 Festival. Hopkinson said she’s lucky she’s not easily starstruck with the number of celebrities she sees at the Sundance Resort Screening Room, where she volunteers each year. (Photo by Leah Peasley, courtesy of Sundance Institute)

All it took was one film screening for Trish Hopkinson to fall in love.

Back in 2007, friend JoAnn Jarrett invited Hopkinson, a Provo native and local poet, to a Sundance Film Festival screening of indie comedy-drama “Delirious” in Salt Lake City. For a film lover like Hopkinson, the invite was a no-brainer — but little did she realize she was walking into the beginning of a passion.

“(Star) Steve Buscemi was there for a Q&A, and I was hooked,” she said. “That was it. I had no idea the Q&A was a thing. I didn’t understand that Sundance was something that was accessible for locals. I had always assumed it was for the wealthy and the film types and famous people.”

Sundance has been a major part of Hopkinson’s life ever since. The next year she and her husband Tyler purchased 20 tickets — the maximum for the special Utah local tickets — and never looked back.

As soon as her schedule opened up after finishing her creative writing degree in 2013, Hopkinson took her love of Sundance to the next level as a volunteer. This year will be Hopkinson’s fourth as a volunteer at the Festival, working the box office at the Screening Room at Sundance Resort.

The work isn’t all glitz and glamour, but volunteers say experience is worth the sacrifice. Many take vacation time from work to give 24 to 80 hours of manpower during the 11-day festival, even traveling in to volunteer from around the globe.

What do volunteers get in return? A credential with access to Festival venues (valued at $200), a custom-designed Kenneth Cole jacket, a volunteer-only party, free film vouchers — along with a special sense of community and a whole lot of gratitude from the Sundance Institute.

“Sundance Film Festival volunteers come from near and far and bring a wealth of experience and passion that truly drives the engine of this Festival,” said Melissa Bowers, senior manager of the Sundance Volunteer Program. “We are so lucky to have enthusiastic volunteers from around the block and around the world, including many who return year after year to help us make this Festival the best it can be.”

For many, Sundance is a social connection, creating a sense of community as they volunteer at the same venues year after year with familiar faces and often keep in touch afterward. For Hopkinson, two of those years at Sundance Resort’s Screening Room meant volunteering alongside Jarrett, the friend who introduced her to Sundance in the first place.

Hopkinson said it’s rewarding just being part of something larger than herself.

“I’m a fan of just about every art form and definitely of independent film,” Hopkinson said. “The vibe at Sundance is invigorating and inspiring. I’ve met some great volunteers and really enjoyed being at the resort. You can’t beat the gorgeous drive up the canyon and the views from Sundance.”

Another perk of working the Screening Room is seeing filmmakers return to the place where they workshopped their films with the Sundance Institute. 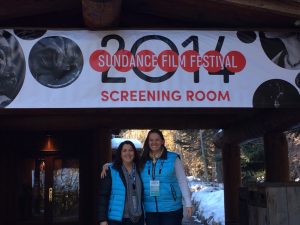 Friends Trish Hopkinson, left, and JoAnn Jarrett pose for a photo while volunteering at the Sundance Resort’s Screening Room during Sundance Film Festival in 2014. The Festival has been a bond shared by the two since Jarrett invited Hopkinson to her first Sundance screening in 2007. (Photo courtesy Trish Hopkinson)

“Robert Redford makes an appearance from time to time and has even seen some of the screenings at the resort,” Hopkinson said. “Last year … he even stood up during the Q&A and talked to the audience and filmmaker saying, ‘This is what Sundance Film Festival is all about.’ I can’t remember which film that was, but it was pretty cool to witness from just outside the theater doors. … It’s important for the volunteers to remain professional at all times, so I’m lucky that I’m not easily star struck.”

A favorite run-in was with Ana Lily Amirpour, who impressed Hopkinson during the Q&A of her film,” The Girl Walks Home Alone at Night.”

“The next summer my husband spotted her at the Owl Bar when she was visiting for Sundance, and we talked with her and told her how much we loved the film and how great she was with Q&A,” Hopkinson said. “I’ve been following her ever since and we were FB friends before she took down her personal account and got all famous.”

Although it’s fun to have an early in on the films that become huge like “Whiplash” and “Me and Earl and the Dying Girl,” Hopkinson said she gets most excited by the independent films that audiences may not get a chance to see again. She said when she cross-checked her festival guides against Netflix and the Internet Movie Database in the past, she found only 10 percent or so of the films listed.

Does Hopkinson ever see herself getting tired of volunteering?

“Never — or rather, until I’m physically not able,” she said. “I’m hooked for life.”