Faces of Fitness: The Warriors 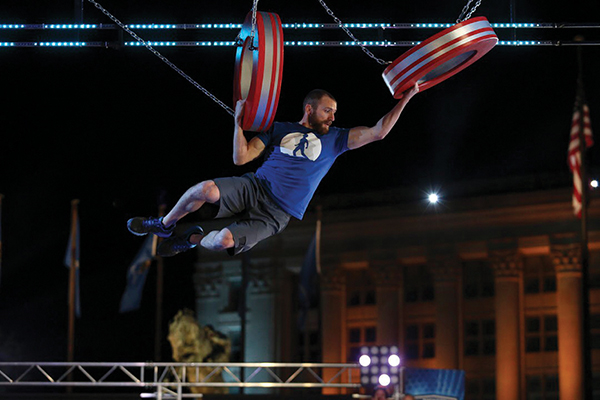 Clayton’s performance on the 2016 season of “American Ninja Warrior” surprised the producers because, unlike the other contestants, they had never heard of him.

Clayton and Chelsea Wolf describe their relationship as an atypical Utah County love story. When they started dating, Clayton was in his 30s and Chelsea was a divorced single mom. But they had a few things in common: a love of fitness and a love of houses.

Clayton’s fitness journey began in his youth. Goals, aspirations, achievements, records and milestones dotted the timeline of Clayton’s life. He was always on the hunt for the feat to take his fitness to the next level.

But after an injury in semi-pro-football, Clayton couldn’t find something to motivate him physically —until he saw an episode of “American Ninja Warrior,” a sports competition show on NBC where participants attempt to finish an obstacle course requiring strength, endurance and flexibility.

“I saw them doing the course and I thought, ‘I can do that,’” Clayton says.

“My kids saved my life. They gave me a reason to be healthy.” — Chelsea Wolf

And Clayton didn’t just think he could — he did. After a handful of rounds, Clayton placed in the top 15 in Oklahoma City, but he fell in the Vegas finals.

“The producers were impressed because they had never heard of me,” Clayton says. “They have heard of a lot of the people on the show because they train at ninja gyms in Texas and they’re all buddies.”

Continuing to pursue his fitness goals, Clayton plans to audition again for the 2017 season of “American Ninja Warrior.”

His wife, Chelsea, has her own warrior story.

“I gained weight when I hit puberty,” Chelsea says. “I received some advice — just eat less and if you don’t like what you weigh, don’t eat much until you get to the weight you want to be.”

By 16, Chelsea had reached full-blown anorexia and later on became bulimic. Then things changed.

“I was 18 when I became pregnant with my twins and I realized it’s not just me now,” she says.

During her pregnancy she not only gained 110 pounds, she gained motivation to overcome her eating disorder. With her babies in infant carriers, she spent hours at the Orem Library studying ways to lose weight healthily. She began running with the stroller and eventually enrolled in the police academy.

“My kids saved my life,” Chelsea says. “They gave me a reason to be healthy.”

Her twins are now 13 and she also added a 9-year-old daughter to the family.

Six years ago, Clayton entered the family picture. After meeting at a mixed martial arts fight in Salt Lake, Clayton and Chelsea went on a picnic up Provo Canyon. Clayton provided the food (pizza leftover from his ward’s Linger Longer). 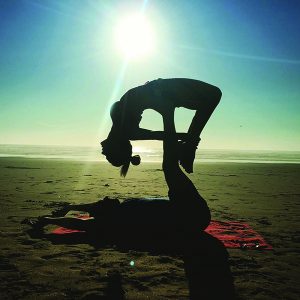 In addition to family longboarding, Clayton and Chelsea enjoy acro yoga. “It combines my balance with his strength and creates a really cool connection,” Chelsea says.

The two hit it off and the dates continued as they drove around and looked at houses, a love that has transitioned into their careers as house-flippers.

But their wedding day didn’t lead to an immediate happily ever after. Last year the couple went to mediation for divorce.

“We struggled,” Clayton says. “It wasn’t driven by anger. We couldn’t figure this machine out. We came from two different worlds and our beliefs and ideas were so different.”

The night after they filed for divorce, Chelsea received a phone call from Clayton at midnight. His father, who Chelsea loved and adored, had died in an accident — which became a catalyst for Chelsea and Clayton to reconcile their differences and become warriors together.

“After his dad passed away, my heart opened up to Clayton again,” Chelsea says. “I saw how short and valuable life was. I wanted to comfort him, to be there with him and to open my heart back up to him. Two days later, I knew I needed to make this work with my husband.”

The two soldiered on through months of therapy, and now their marriage is better than ever.

If you are looking for the Wolf family, you may find them longboarding down the Murdock Canal Trail. You may find the couple connecting through acro yoga. Or you may find them  snapping a photo in the spot of their first date — a spot they return to every year, minus the leftover pizza.