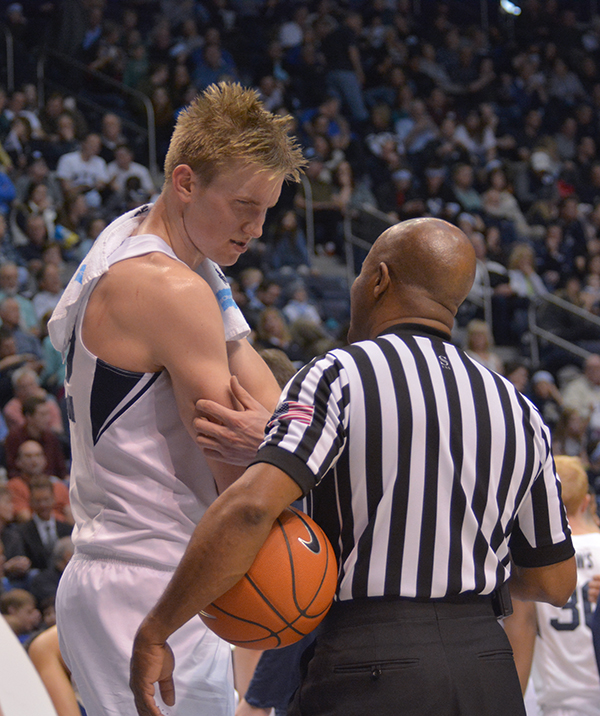 BYU sophomore Eric Mika talks to the referee during a timeout in BYU’s game against Pepperdine at the Marriott Center. Mika was chosen for the third time this season as the West Coast Conference Player of the Week. (Photo by Rebecca Lane)

BYU men’s and women’s basketball players swept the West Coast Conference Player of the Week awards this past week.

Mika helped lead BYU in a 2–0 effort last week with wins over Pepperdine (99–70) and Pacific (62–47). He average 19.5 points, 11 rebounds and 2.5 shots while earning his seventh consecutive double-double. Also, he shot 51.7 percent from the field and a perfect 100 percent from the free-throw line.

“Our focal point is to get him the ball and get him going,” said teammate L.J. Rose, a BYU senior guard, about Mika. “He opens up so many things. Sometimes they have to double, triple team him. He gives to the guards, gets us open looks, gives us a chance at an offensive rebound and so I think now it’s a no-brainer knowing the numbers that he’s putting up, but the presence and the attention that he demands is great, so I think he is definitely a key part to what we’re doing.” 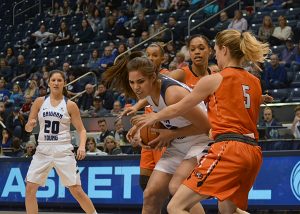 BYU senior Kalani Purcell muscles her way to the basket between two Pacific defenders. Purcell had a double-double in the Cougars 68–50 win over Pacific (Photo by Rebecca Lane/UV360)

While this is Purcell’s first WCC Player of the Week award this season, it is the fourth time in her career receiving this honor. In the double victory of the week, Purcell helped her team defeat Pepperdine (73–47) and Pacific (68–50) with 20 points, 21 rebounds, 14 assists and four steals on the week. She shot 55.6 percent from the field while averaging 10.5 rebounds, 7 assists and 2 steals. Purcell has 11 double-doubles this season.

BYU women’s basketball coach Judd Judkins says Purcell is always the strongest player on the court and that he wishes referees “wouldn’t penalize her because she’s the strongest kid on the floor.”

The Let's Be Better: 10 ways our culture can still improve for working women Previous post

Find the 6 differences: Kalani Sitake in the BYU student section Next post