Mutual, an LDS dating app, has multiple filters for safety. There is a two-way verification system that has users link their Facebook profiles to the app as well as they have a team who reviews profiles for appropriate content. (Image courtesy Mutual)

Dating has gone to the apps these days.

And those apps just weren’t cutting it for BYU alumnus Cooper Boice, a member of The Church of Jesus Christ of Latter-day Saints.

Dating became increasingly difficult for Boice when he moved to Arizona after graduation from BYU.

“Really when I moved to Arizona I realized that if you jump on a dating app it was pretty much useless because no one was LDS,” Boice said. “You’d have to swipe through at least a hundred people to find anyone that is LDS.”

In April 2016, Boice joined with his technologically savvy friends to create a dating app that focuses more on what he is looking for — a match made for the temple. Mutual was born, which gives Mormon singles a chance to connect and date other Mormon singles with similar values and relationship goals.

However, there was one major glitch with Mutual. 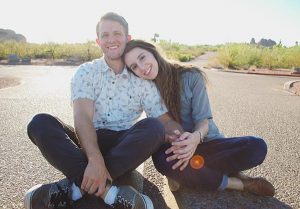 David and Kristina Lake are one of seven couples who are now married or engaged after meeting on Mutual. (Photo courtesy Mutual)

The holdup came in the technology — Mutual was only available on iOS, limiting the network of single Mormons. Requests came flooding in for Mutual to create an Android version of the app, so on Jan. 24, 2017, Mutual launched a Kickstarter campaign to raise $20,000 to develop the Android version and make the app mutual.

“We wanted to create something that was positive and safe and people would not be embarrassed to use,” Boice said.

The Kickstarter campaign runs through Feb. 23. If Mutual reaches its goal, it has a goal to release the Android app by April 2017.

Outside of the niche users, Mutual provides a unique dating app experience through its filtering system: it provides a way to display missionary service, it has a two-step verification process including a team who reviews Mutual profiles, and it includes a relationship readiness meter allowing users to gauge the expanse of their swipes’ dating seriousness.

“We hear about success stories all the time — people getting engaged or going on dates with people,” Boice said about the first eight months of Mutual. “Literally yesterday I got a phone call from a good friend to tell me that he got engaged to a girl that he met on Mutual that he wouldn’t have met otherwise. It is a really good feeling to be a part of that. A good reason to support our Kickstarter and our life is it actually affects peoples lives and their happiness.”

To date, Mutual is aware of seven couples who have become engaged after meeting through the app. Of the tens of thousands of current Mutual users, about 60 percent are female and 40 percent are male.

As part of the Kickstarter campaign, Mutual teamed up with “Studio C” actor Stacey Harkey to create a promotional video about the woes of LDS dating.

“We want people to laugh about the challenges of Mormon dating and then pick up their phones and do something about it,” Harkey said in a press release. “Mutual’s Kickstarter gives people the tools to do both.”

And the video creates those laughs referencing youth dances just like the name of the app pays homage to the weeknight LDS youth activities.

“We struggled with the name for a long time,” Boice said. …”Everyone went to Mutual growing up and that’s what the app is about. You only match with people that you have mutual interest.”