Faces of Fitness: The Survivors 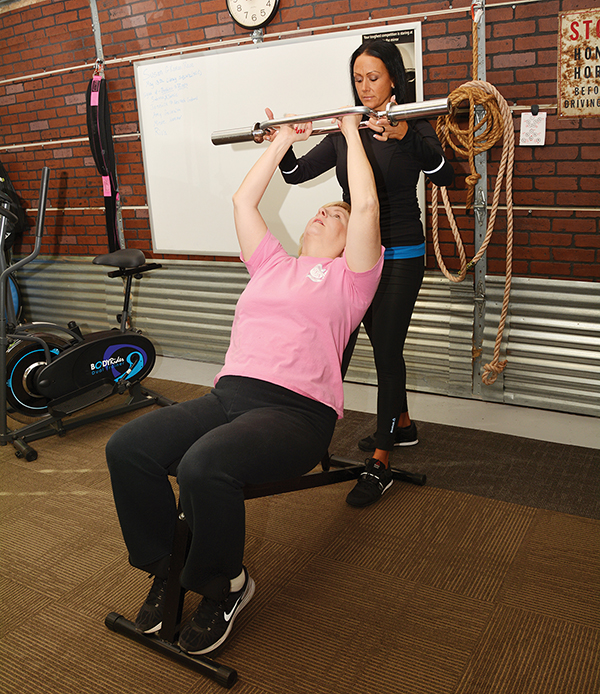 When Merrilee Boyack was declared cancer-free, the firefighters in Poway, California (where she served on the city council), all wore pink T-shirts to celebrate. Once she moved to Utah, Merrilee trained with Sabrina Jo Estes.

A Lehi garage has been the scene of many celebrations, but they aren’t ones you would find on the cover of Sports Illustrated. The celebrations have come after the first pushup, the first situp and the first time Merrilee Boyack lifted her arms over her head.

To Merrilee, these feats mark her desire to never give up and her endurance to conquer not only breast cancer, but also its side effects. And she found the perfect trainer who took a different journey to “fit.”

In 2008, Merrilee Boyack was diagnosed with stage three breast cancer. At the time, she already had a long list of other titles: nationally-acclaimed speaker, bestselling author, estate attorney, city councilwoman, wife and mother.

She fought through chemotherapy, through radiation and through a radical mastectomy (which she had on the day of her reelection to the city council).

When she was declared cancer-free, the next battle began — reconstruction. Five surgeries later her muscles had been “rearranged” due to treatments and procedures. Her medications also caused weight gain in addition to emotional side effects.

“To be able to find that strength has given me hope that I can fight and progress even more.” — Merrilee Boyack, breast cancer survivor

“After everything had happened, I talked to other breast cancer survivors,” Merrilee said. “Most of them were tired and they weren’t fighting. I wanted to fight.”

Merrilee knew keeping a healthy weight decreased the chances of cancer coming back, so she searched for a trainer who could help her — someone who understood the fight.

Nearly 14 years ago, Sabrina weighed more than 300 pounds and had tried multiple approaches to losing weight.

“I literally started out lifting cans and I was so excited when I could lift the bigger cans,” Sabrina says.

Eventually Sabrina dropped 160 pounds — and learned to keep it off.

“I want my clients to understand that I’ve been there,” Sabrina says. “I understand, and I know that they can do it as long as they can commit.” 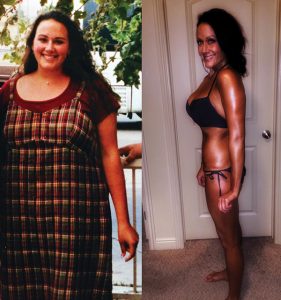 Meet the Survivors: Merrilee Boyack and Sabrina Jo Estes both have fought the fitness fight. After battling breast cancer, Merrilee’s muscles had been rearranged and she had to regain strength. Trainer Sabrina knows the hard road of fitness as well — she previously weighed 300 pounds (see below).

Merrilee recalls her first visit to Sabrina’s home where she laid on the floor of the in-home gym. Sabrina faced a new challenge with helping Merrilee — figuring out where her muscles were.

Step by step and rep by rep, Merrilee started to rebuild the muscles in her core, but not every day has been easy. With Sabrina’s help, Merrilee has conquered many hard days.

“Some trainers have thin bodies and haven’t experienced hardship in their lives,” Merrilee says. “When I come in and I’m a mess because of the medications I am on, Sabrina scrapes me up off the floor and she keeps pushing me.”

And the results of Merrilee’s training aren’t just physical.

“I finally have hope that I can be strong again,” Merrilee says. “When you go through that big of an ordeal, your strength — both physical and emotional — is really drained. To be able to find that strength has given me hope that I can fight and progress even more.”

Sabrina and Merrilee both recommend having the courage to take the first step when it comes to conquering fitness goals.

“Years ago when I used to attend a fitness class I would get in the car and clap and applaud myself,” Merrilee says. “I’m not a physical person. Working out is not natural for me. It’s important to clearly identify that first step and then take it.”

“So many people look at it like, ‘I have 100 pounds to lose.'” she says. “Just start with one pound a week. Once people get past that first month and see what they can accomplish, it’s easy to keep going.”