Home Sports BYU Cougars hope competitive practices are enough to push them past No. 1 Gonzaga

Cougars hope competitive practices are enough to push them past No. 1 Gonzaga 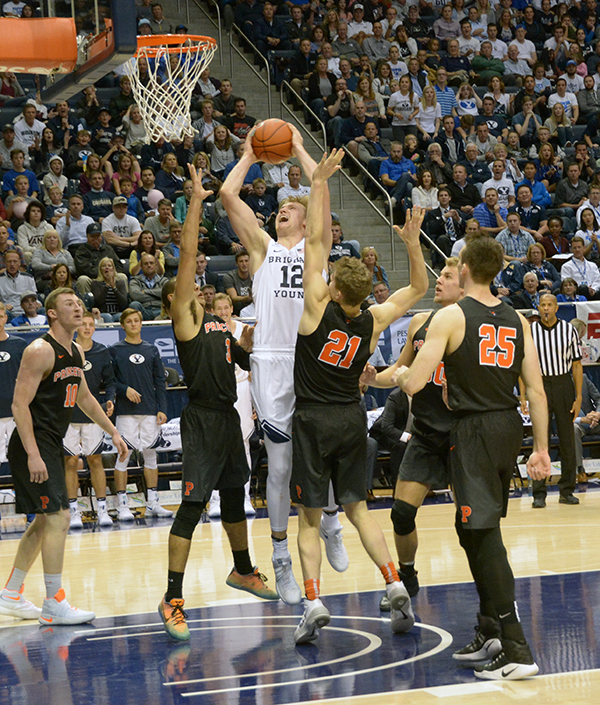 BYU sophomore Eric Mika pushes through the defense in the season-opener against the Princeton Tigers. Mika has a difficult assignment in Thursday night’s game against No. 1 Gonzaga in defending 7-foot-1, 300-pound senior center Przemek Karnowski. (Photo by Rebecca Lane)

The odds are stacked against the Cougars in their Thursday night matchup against No. 1 Gonzaga.

As the top ranked team in the country, the Bulldogs (22-0, 10-0) are easily striding past their opponents with a 23.8 point average scoring margin.

“There is no question in my mind that right now they deserved to be the No. 1 team in the country,” Rose said. “Until somebody beats them, I think they’ll probably stay there.”

And now BYU coach Dave Rose is unsure if BYU sophomore Nick Emery will be able to play in Thursday’s conference game. Emery skipped practice on Wednesday because he was sick with “aches and chills.”

“I could see at the end of practice yesterday that he looked to me a little bit tired,” Rose said. “And he’s a kid that never tires. He looked a little bit winded and kind of pale. And today he didn’t look good at all.”

While Emery’s pending playing time against the first No. 1 team to ever play at the Marriott Center will be a game-time decision, BYU (16-7, 7-3) moved forward with aggressive practices.

“(Przemek Karnowski) looks big and everyone says he’s big, but you don’t know how big he is until you have to try and keep him out of the lane or when he ducks in or tries to seal you.” — Eric Mika, BYU sophomore

“(Practice has) been really competitive,” said BYU sophomore Eric Mika. “We’ve gotten up and down the court a lot. We’ve split up the team so that we could really get after each other and help each other get ready mentally and physically for this game.”

Mika has a giant assignment in the West Coast Conference showdown with 7-foot-1, 300-pound senior center Przemek Karnowski, who redshirted last season after undergoing back surgery. Karnowski is the inside core to the Bulldog shooting squad, which has average 51.2 percent from the field this season. He averages 12.5 points and 5.4 rebounds per game. 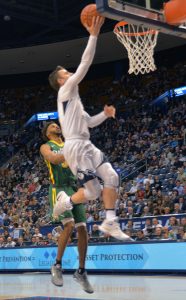 “He looks big and everyone says he’s big, but you don’t know how big he is until you have to try and keep him out of the lane or when he ducks in or tries to seal you,” Mika said. “He’s big, he’s strong, he’s physical and that’s his game. … And when he does it, he does a heck of a job.”

The 2016–17 has brought a lot of lineup changes for the Bulldogs. While they lost Domantas Sabonis and leading scorer Kyle Wiltjer to the NBA and only returned two starters, three transfers became eligible for the season. Guard Nigel Williams-Goss from Washington, guard Jordan Mathews from Cal, and forward Johnathan Wiliams from Missouri are the transfer athletes leading Gonzaga right now.

“They have some wrinkles, but (Karnowski) makes them very similar to where they’ve been, a big guy down low,” Rose said. … “Those three (transfer) guys bring some really athletic strength and speed that is unique to Gonzaga’s guard line and the front line.”

Despite the changes, Rose says they are a similar Gonzaga team BYU has seen for years.

“Your effort has to be extreme. It has to be unmatched. Hopefully, that’s what we get from our guys. You get a group of guys that get going and you get the crowd behind you and that’s what makes college basketball exciting.” — Dave Rose, BYU basketball coach

“They’ve always got a couple of really standout guys on their front line and in their back court, but this year they’ve got a group of three or four in each place,” Rose said. “They’ve got a couple point guards that can really run their team well. Their depth is tremendous.”

The challenge for the Cougars is figuring out how to disrupt an efficient team with depth, but the coaches have a plan that has included the aggressive practices.

“The most important thing for us is to be able to play within ourselves, attack them and take advantage of opportunities,” Rose said. “We’ve got to really share the ball. Defensively we’ve got to have a really aggressive mindset and make plays on the ball. Your effort has to be extreme. It has to be unmatched. Hopefully, that’s what we get from our guys. You get a group of guys that get going and you get the crowd behind you and that’s what makes college basketball exciting.”

BYU plays Gonzaga on Thursday, Feb. 2, at 9 p.m. at the Marriott Center. The game will be televised live on ESPN2.