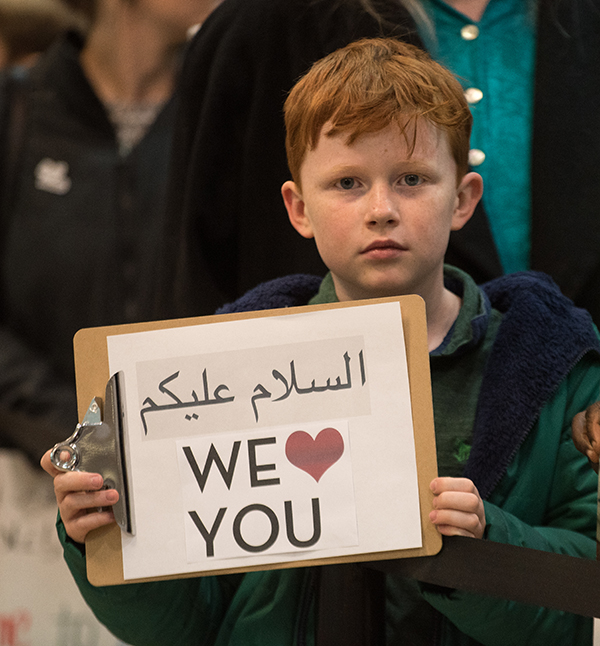 A young boy holds a sign to welcome Utah’s latest refugee family from Afghanistan, which arrived at the Salt Lake City International Airport on Thursday, Feb. 2, 2017. (Photo by Ryan Turner)

Some parents took their kids out of school early on Thursday to give them a different sort of lesson.

Utah families headed to the Salt Lake City International Airport to welcome Hassan Barat Ali Hassan, Fozia Ramazan Ali Qurban Ali, their two sons, ages 15 and 4, and their three daughters, ages 11, 8 and 6 — the last refugee family from Afghanistan before the ban is enforced. 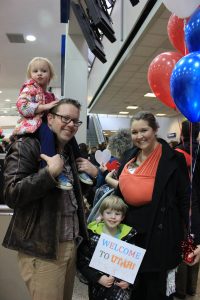 Jenae and Seth Jeppesen, of Orem, came to welcome the refugees with their three young children. Eli Jeppesen, center, was worried the refugee family wouldn’t see the sign he colored. (Photo by Kjersten Johnson)

Orem residents Jenae and Seth Jeppesen hoped their three children, though one is only 2 weeks old, would learn a lot during the welcoming.

“It’s about love,” Jenae said. “There are people who don’t have a place to live and we have so much here.”

She and Seth thought it was a good opportunity to teach about different cultures and how to love others.

“It’s a chance to teach the kids about democracy and that it’s good to stand up for what’s right,” Seth said. “Everyone is human and needs love and acceptance.”

The Jeppesens learned about the family from the event’s Facebook page.

University of Utah student and Catholic Community services volunteer Jared Potter created and shared the event on Facebook, the primary way many people knew about the Ali Hassan family’s arrival. Hundreds gathered to support and welcome them.

“I was overwhelmed. I was really proud of my city and of Utah,” Potter said. “I was just really happy to see so many people that were willing to come out and show their love and support.” 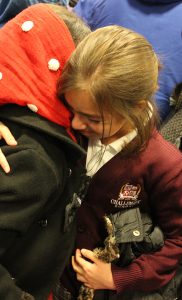 Fatima of Utah hugs the newly arrived Fatima of Afghanistan, a member of the last refugee family to come to Utah because the executive-enforced ban. (Photo by Kjersten Johnson)

“The chair of our board started gathering donations,” Whitehead said. “We actually have gotten quite a few donations of gift cards and donated items.”

Whitehead is friends with the host family and plans to deliver the donations from Utah County residents in the next few weeks.

“I don’t think you should be disappointed with people showing up,” Whitehead said. “Even if ten people came, it’d be a start.”

Ali Hassan and his family felt welcomed by everyone there.

“Thank you so much for your warm welcome,” Ali Hassan said through an interpreter. “We really appreciate your guys’ help to help us get here from the harsh situation.”

Fatima Hassan Barat, 11 years old, was greeted by 11-year-old Fatima of Utah, who speaks Persian though she grew up here. When she met Fatima Barat, the two spoke broken Persian to each other and realized they were the same age and had the same name. The moment was emotional for them and they hugged and cried — and Fatima Hassan Barat made her first friend in her new home.

If you would like to donate to help refugee families in Utah, donations are accepted at Catholic Community Services here. Watch a video on the Ali Hassan family’s arrival at the Salt Lake City International Airport below.

Why BYU fans shouldn't be too disappointed in the loss to No. 1 Gonzaga Next post